Izium Mass Graves: Tortured victims with bound hands and entire families killed by the Russian invaders Mass burial site at Izium, imprisoned teenagers and other Russian war crimes in Kharkiv oblast 13-year sentence against Belarusian investigative journalist who helped expose crimes against Ukraine Vovchansk Engineering Works: Dungeons on the Chechen ModelRussian invaders remove Ukrainian language and literature from schools First tortured victims exhumed after Ukraine drives Russian invaders out of Kharkiv oblast village Even Kremlin supporters admit Russia has created ‘a humanitarian disaster zone’ in occupied Ukrainian cities New Russian conveyor belt of repression targets Crimean Tatars, other Ukrainians abducted from mainland Ukraine Admission of guilt: Russia blocks international investigation of Olenivka mass killing of Ukrainian POWs Russia releases convicted mass murderer to fight in Ukraine, then awards him ‘for bravery’ Russia teaches Mariupol children to shoot and to hate Ukraine ‘In a panic, people abandoned their bed-ridden relatives.’ А resident of Mariupol story about how people were coerced to leave for RussiaConflicting values and conflicting narratives: the case of Russia’s war on UkraineUkrainian POWs threatened with execution if they won’t blame Ukraine for Russia’s bombing of MariupolRussia sends forcibly mobilized Ukrainians from occupied Donbas to die as ‘live bait’ at the frontlinePregnant Ukrainian medic held in Russian captivity for four months Russia razes Ukrainian city to the ground and says ‘there’s no point’ to rebuilding it Russia invites Steven Seagal, while blocking the Red Cross from visiting Olenivka prison after killing of 53 Ukrainian prisoners of warRetired Ukrainian naval commander abducted, tortured and taken to Russian-occupied Crimea ‘for trial’Russia killed Inna’s husband, destroyed her home and give awards to the killers for ‘liberating’ Mariupol
• Topics / The right to life 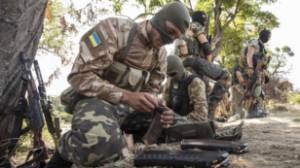 Don’t look now but it’s been one hell of a deadly month in the Donbas.

I know it’s easy to miss given all the excitement elsewhere, but according to statistics released by the United Nations last week, 27 Ukrainian soldiers were killed and 123 wounded in the first part of July alone.

Six more were killed over one 24-hour period this past weekend.

The reports of this slow drip of death have been coming in every single day, each looking like the one before it.

It becomes a blur.

But when you add it all up, you need to go back nearly a year to find another month as deadly as July -- and the month isn’t even over yet.

But despite all the death and destruction, almost nobody is noticing.

The war in the Donbas has become the forgotten war.

It hasn’t become a frozen conflict, like in Abkhazia and South Ossetia, as many had predicted.

Instead, it’s a simmering conflict that has slipped below the world’s radar.

It’s a festering sore on the Ukrainian body politic, one that is sapping the country’s energy, wearing down its resolve, and killing its citizens.

And in this sense, the forgotten war in the Donbas is serving the purpose that Russia intended it to serve.