Appeal from Aleppo
• Topics / The right to life

Russia’s Bombing of Aleppo Must End 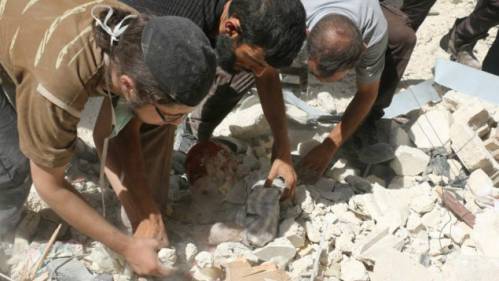 Syrian men remove a victim from under the rubble of destroyed buildings following a reported air strike on the rebel-held Salihin neighborhood of the northern city of Aleppo, on September 11, 2016. (Ameer Alhalbi/AFP)

"The world is witnessing a humanitarian catastrophe of historic proportions. It is happening in Syria. It is being perpetrated by the president of Russia, Vladimir Putin, in support of his protégé, Bashar al-Assad. Russian planes are bombing the civilian population of Aleppo, the country’s second-largest city, to assist Syrian government forces on the ground. The combined assault has, among other things, put the city’s remaining hospitals out of commission and deprived the population of drinking water.

President Putin is moving aggressively to exploit the four months between now and the January 20 U.S. presidential inauguration, based on a callous political calculation. As the New York Times puts it: “Mr. Putin calculates that the departing President Obama will be unlikely to intervene in the escalating Syrian conflict and a new American president who might consider a tougher policy will not yet be in office…The next American president will face a new reality and will be forced to accept it.” When the facts are fully established, Putin’s bombing of Aleppo will be viewed as among the modern world’s most egregious war crimes.

I appeal to the people of Russia, Europe, and the rest of the world not to stand idly by, but to spread the word and voice their outrage. An outpouring of public opinion could induce President Putin to put an end to his heinous crimes against humanity."