Ukrainians tortured and imprisoned in Donbas for supporting Ukraine, with Russia blocking their release «Blessed is he who visited this world in its fateful moments...»Ex-Berkut officer on trial for Maidan killings reinstated in Ukraine’s police forceA brief description of the KHPG strategic litigations in the first half of 2021Russia lodges a surreal ECHR inter-state claim against Ukraine over MH17, water for occupied Crimea & "discrimination"Remember 16-year-old Stepan Chubenko and how Russia protected his Donbas militant torturers and killers How can Ukraine’s leaders hand Babyn Yar into private Russian hands? Judge who persecuted Maidan activists could get millions in ‘compensation’ following Supreme Court rulingInterior Minister Avakov accused of manipulating public opinion over Ukraine’s most controversial trial A brief description of the KHPG strategic litigations in July–December 2020Lukashenko plotted to kill Sheremet yet Ukraine has charged people with no motive for his murder The practice of application of Article 111 of the Criminal Code of UkrainePost-Maidan Tale of ImpunityUkrainian prosecutor hurries to acquit judge who persecuted Maidan activistsKyiv court orders witness to retract ‘defamatory’ testimony given in Yanukovych trialA brief description of the KHPG strategic litigations in January – June 2020Taras Matviyiv, Maidan activist killed in Donbas saving comrades declared Hero of UkraineOpposition journalist facing political persecution is in danger of extradition from Ukraine to KazakhstanA brief description of KHPG strategic litigations in July–December 2019Crimean Tatar veteran activist who “fed Maidan” has died in occupied Crimea
• Topics / Politics and human rights 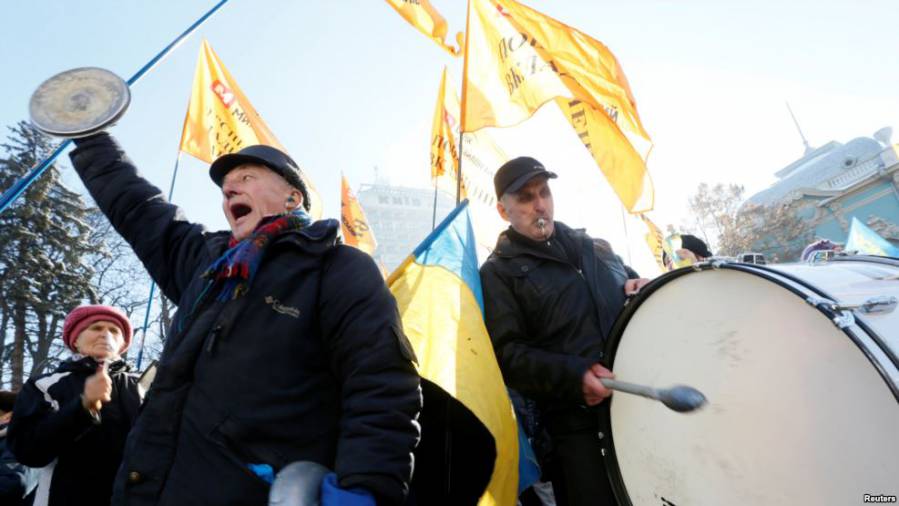 Demonstrators shout slogans while they take part in a rally of depositors in failed Ukrainian banks who demanded compensation of their deposits, in front of the parliament building in Kyiv on November 15.

Ukrainian authorities locked down the heart of the capital on November 15 as hundreds of demonstrators protested outside government buildings over poor economic conditions and rising prices for vital necessities such as natural gas and bread.

Police vehicles and officers in riot gear blocked streets around Kyiv’s government quarter and stood guard with bomb-sniffing dogs in front of the presidential administration, the central bank, and parliament, where crowds braved freezing cold to demand lower utility prices and higher pensions.

Government officials claimed the protests marked the start of a Kremlin-orchestrated plan to "destabilize" Ukraine, which faces economic difficulties and a simmering war against Russia-backed separatists who hold parts of the Donetsk and Luhansk provinces in the east.

Organizers of the protest included leaders of Opposition Bloc -- created from the remnants of the defunct party of former President Viktor Yanukovych, who was driven from power by protests known as the Euromaidan and fled to Russia in 2014 -- and former Prime Minister Yulia Tymoshenko’s Batkivshchyna party.

"Three years after the [Euromaidan protests], we can say that Ukraine’s clan system has been revived. Unfortunately, we again have a president who is an oligarch of the highest level," Tymoshenko said of President Petro Poroshenko in a call to protest published on the party’s site on November 14.

Her critics claimed she was merely fomenting unrest to further her own political ambitions, though some participants told RFE/RL that they had heeded Tymoshenko’s call to protest out of frustration with the government. Others, however, said they were apolitical and had come out to earn some money.

Anya, a 60-year-old pensioner who declined to give her last name because she feared having her $130-per-month pension taken away by the government for protesting, said she and her two friends answered an online advertisement that promised $5 for five hours of demonstrating.

Oleksandr Tkachuk, chief of staff of Ukraine’s domestic SBU security service, said that security was particularly tight because the authorities fear that the protests marked the start of a Kremlin-managed plan to undermine the government by supporting former political allies of Yanukovych and encouraging early parliamentary elections.

"We have previously stated that we have the information proving Russia’s attempts to hijack Ukrainian politics and internal affairs, exploit different grievances to provoke mass revolt and destroy the existing political system," Tkachuk told RFE/RL.

He was referring to a document leaked by Ukrainian hackers last month which they claim was taken from the e-mail of a senior aide to Russian President Vladimir Putin. The document’s authenticity has not been confirmed.

"It does not necessarily mean that today’s demonstrations are completely organized by Russia’s puppets," Tkachuk added. He provided no specific evidence of a Russian role in the protests.

Many analysts believe Russia is continuing to seek to foment divisions and instability in Ukraine after forcibly seizing the Crimean Peninsula in March 2014 and backing the separatists in eastern Ukraine, where the conflict has killed more than 9,600 people since April 2014. But observers also say that Poroshenko’s government uses warnings about a Russian threat to deflect criticism over pressing problems such as corruption and economic troubles.