Putin’s National Guard Cracks Down On Opposition Activists In Irkutsk 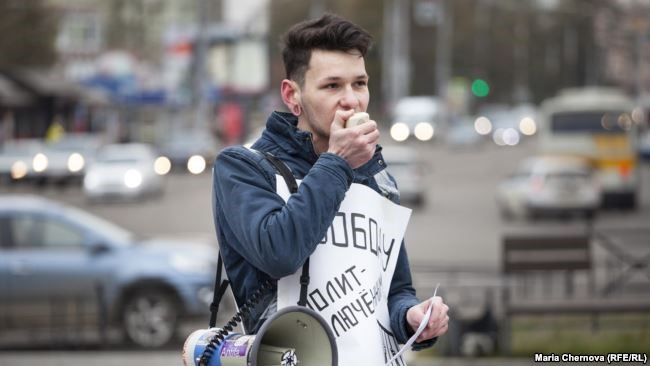 IRKUTSK, Russia -- An anticorruption protest in the Siberian city of Irkutsk on March 26 passed peacefully. The authorities had given permission for the event, and about 1,000 people listened to a few young organizers give impassioned speeches calling for an investigation into allegations of corruption leveled against Prime Minister Dmitry Medvedev before heading home. There were no reports of arrests or violence.

The drama came later, in the early morning hours of April 6.

"On Saturday at 6 a.m., I was awakened by the doorbell. They said that we were leaking water on the downstairs neighbor. When I opened the door, men in masks pushed me against the wall," says Natalya Maksianovich, the mother of 24-year-old Igor Martynenko, an organizer of the Irkutsk protest. "I am still in shock.... After a few minutes, they took Igor and [his girlfriend and fellow protest organizer] Sofia [Miktinyuk] out."

She says nobody knew anything about her son for two days. "I didn’t even know where he was. I was afraid they were beating him or worse," Maksianovich says. "Why else would they hide him from us?"

The men refused to identify themselves and wore no insignia.

But that wasn’t the end of the story. After Martynenko was driven off, the masked men spent more than an hour searching the apartment. They ignored requests for a court order as they packed up virtually all the electronics on the scene into plastic bags. They left without leaving a written protocol of what had been seized.

At the same time, officials were busy at the home of activist Dmitry Litvin. He, too, was hustled off without communication and disappeared into the web of Russian law enforcement for more than 48 hours.

The detentions came the day before the four organizers planned to get together and discuss their next steps after the March 26 rally.

"The four of us were the organizers of the protest," Miktinyuk tells RFE/RL. "And it was completely legal, by the way. All our opposition activity is completely legal. All the protests or other actions that we organized were always conducted with the permission of the authorities and kept within the limits of the law."

"Yes, we are unhappy with the current government and the direction it is taking the country," she continues. "I am certain that our detention was connected with our active opposition to the leadership of the country."

While their concerned relatives were making the rounds of Irkutsk police stations and courtrooms, the detainees were being held at the city’s Center for Combating Terrorism. The masked men who detained them, it turned out, were soldiers of Russia’s newly formed National Guard.

The National Guard is a force of some 400,000 officers that was created in 2016 by President Vladimir Putin and placed under the command of Viktor Zolotov, who formerly headed Putin’s personal protection service.

Although the official mission of the National Guard is to combat terrorism, many in Russia believe its true purpose is to protect the Putin government and to ensure his smooth reelection to a fourth term in March 2018. During the debate about the force in the State Duma, Communist Party lawmakers openly associated its creation with "the forthcoming election," while nationalist firebrand Vladimir Zhirinovsky said the force was essential to deal with "any mutineers, revolutionaries, and extremists."

There were no arrests or violence at the March 31 protest in Irkutsk.

In the end, only 19-year-old Litvin is facing criminal charges. He was released pending trial on charges of "insulting the feelings of believers" for posting allegedly antireligious images on social media. One photograph of someone making a rude gesture in the direction of a church, which Litvin reposted in 2015, particularly attracted the attention of prosecutors.

The other detainees were released, having been told officially that they had been detained in the capacity as witnesses in the developing case against Litvin. Except for Martynenko. He was sentenced to 10 days of administrative custody for allegedly resisting a police officer, although his relatives were not allowed to testify as witnesses to his detention and a video showing some of the incident was not taken into consideration.

Defense lawyer Svyatoslav Khromenkov tells RFE/RL that he believes the court "was guided by an a priori presumption of Martynenko’s guilt."

Khromenkov says he has no doubt that the whole matter was drummed up as a means "for the current regime to let everyone understand that it has muscles."

"As far as I understand, the Irkutsk protest against corruption on March 26 passed relatively peacefully, without arrests like they had in other regions," Khromenkov adds. "The police were reproached for this. So [the authorities] retroactively went after the standouts -- in particular, the young people who particularly attracted attention with their opposition activities and their liberal views."