There’s always a choice. Anti-war activities in Russia, 23-27 August Russia claims Ukraine ‘abducted’ the Sri Lankan students freed after months in Russian captivity Russia’s Luhansk proxies ‘sentence’ two OSCE employees to 13 years on grotesque treason charges Izium Mass Graves: Tortured victims with bound hands and entire families killed by the Russian invaders Mass burial site at Izium, imprisoned teenagers and other Russian war crimes in Kharkiv oblast Abductions and feared mass grave of Russian invaders" victims in liberated Vysokopillia (Kherson oblast) Vovchansk Engineering Works: Dungeons on the Chechen ModelMultiple jail terms for a patriotic Ukrainian song at Crimean Tatar wedding in Russian-occupied CrimeaBodies of more civilians murdered by the Russians found in liberated Kharkiv oblast village First tortured victims exhumed after Ukraine drives Russian invaders out of Kharkiv oblast village Fascism is here in Russia. Anti-war activities in Russia, 15-22 August‘They shot at our feet, near us, and one guy was wounded with an electric shocker...’ Russia plans special propaganda ‘lesson’ explaining to children in occupied Ukraine why the bombing of their cities is ‘liberation’Russian invaders plan ‘trial’ of abducted Ukrainian volunteer on charge of ‘international terrorism’ Instead of obeying UN Court, Russia fabricates show trial to label Crimean Tatar Mejlis ‘terrorist’Russia teaches Mariupol children to shoot and to hate Ukraine Those who unleashed this war will not go to Heaven. Anti-War activities In Russia, 7-14 August 2022‘In a panic, people abandoned their bed-ridden relatives.’ А resident of Mariupol story about how people were coerced to leave for RussiaUkrainian POWs threatened with execution if they won’t blame Ukraine for Russia’s bombing of MariupolJail or steep fines in Russian-occupied Crimea for playing a Ukrainian anti-war song or for saying ‘Glory to Ukraine’
• Topics / Terrorism

How Not to Become a War Criminal: A Guide for Russian Soldiers 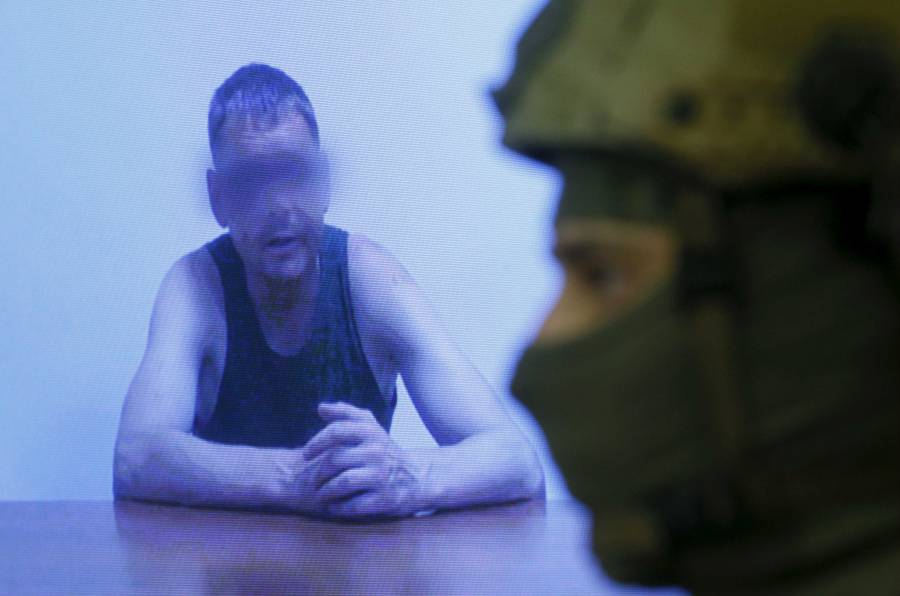 An officer of the Security Service of Ukraine (SBU) stands next to a monitor showing a man, who according to SBU is a Russian army major detained by Ukrainian servicemen at the weekend, during a news briefing in Kyiv, Ukraine, July 29, 2015. REUTERS/Valentyn Ogirenko

Few Russian citizens view the Kremlin’s invasion into Ukraine as unlawful. Not many Russian servicemen realize that when they are fighting there, they fight as unnamed, faceless soldiers who lack the protection of international pacts, including the Geneva Conventions. They not only risk death, injury, or abandonment by the state that sent them there; they also risk becoming war criminals.

The Kremlin has dragged Russia’s army into actions that, legally, can only be carried out by subversive special forces. If special force officers return alive, they are not disowned because of their special status. However, the systematic use of regular or contracted army personnel for such purposes amounts to criminal military commands. Those who knowingly obey manifestly unlawful military orders transform themselves into war criminals.

Obeying such orders under duress (as appears to have been the case with at least 250 people in one case) may offer legal recourse in some situations. Nonetheless, it is better to listen to the warning given by the chairwoman of the Union of the Committees of Soldiers’ Mothers of Russia and not get involved at all: “When military enlistment offices recruit, they promise money. No one tells them that they will be war criminals. Nobody says that they go there impersonal, anonymous, and that everyone will then spit on them, on their families.”

The Criminal Code of the Russian Federation says, “If a person following an order was aware of the order being unlawful, they become complicit in the crime, with the superior being held as the organizer of the crime, and the subordinate, the executor.” According to the statutes currently in effect, military servicemen are only obliged to follow lawful orders and most orders must be given in writing. In case of doubt, military service people should request a written order from their superior. Otherwise, the subordinate runs the risk of becoming a war criminal. A prime example of this is the Russian crew operating the BUK anti-aircraft missile system that destroyed the Malaysia Airlines Flight MH17, killing 283 innocent civilians over Ukraine.

Russian servicemen have legal recourse against unlawful orders, both within Russia as well as internationally. By collecting pertinent evidence, they may claim damages, as well as refugee status abroad. They have the right to contest a verdict in Russian courts, as in the European Court of Human Rights, and to participate in claims against Russian-sponsored terrorism at the International Court of Justice. They and their families are also able to file for considerable financial and moral compensation from the Russian government.

Understanding that violent events in Ukraine are being orchestrated by Russia’s top leaders, Russian military servicemen who find themselves fighting Russia’s undeclared wars—whether unwittingly or under duress—can protect themselves. They can collect proof of being coerced to following unlawful orders and engaging in unlawful combat. Such proof can consist of, but is not limited to, the following:


The personal decision to serve in an unlawful war is often a difficult one. Understanding the heavy predicament many servicemen face, it is important to recall that a system ensuring basic human rights and freedoms exists and should be utilized. It is there to protect the victims of war, and was created as a result of the wisdom gained from the tyranny of previous world wars.