Mass burial site at Izium, imprisoned teenagers and other Russian war crimes in Kharkiv oblast 13-year sentence against Belarusian investigative journalist who helped expose crimes against Ukraine Vovchansk Engineering Works: Dungeons on the Chechen ModelRussian invaders remove Ukrainian language and literature from schools First tortured victims exhumed after Ukraine drives Russian invaders out of Kharkiv oblast village Even Kremlin supporters admit Russia has created ‘a humanitarian disaster zone’ in occupied Ukrainian cities New Russian conveyor belt of repression targets Crimean Tatars, other Ukrainians abducted from mainland Ukraine Admission of guilt: Russia blocks international investigation of Olenivka mass killing of Ukrainian POWs Russia releases convicted mass murderer to fight in Ukraine, then awards him ‘for bravery’ Russia teaches Mariupol children to shoot and to hate Ukraine ‘In a panic, people abandoned their bed-ridden relatives.’ А resident of Mariupol story about how people were coerced to leave for RussiaConflicting values and conflicting narratives: the case of Russia’s war on UkraineUkrainian POWs threatened with execution if they won’t blame Ukraine for Russia’s bombing of MariupolRussia sends forcibly mobilized Ukrainians from occupied Donbas to die as ‘live bait’ at the frontlinePregnant Ukrainian medic held in Russian captivity for four months Russia razes Ukrainian city to the ground and says ‘there’s no point’ to rebuilding it Russia invites Steven Seagal, while blocking the Red Cross from visiting Olenivka prison after killing of 53 Ukrainian prisoners of warRetired Ukrainian naval commander abducted, tortured and taken to Russian-occupied Crimea ‘for trial’Russia killed Inna’s husband, destroyed her home and give awards to the killers for ‘liberating’ MariupolInvaders stage fake referendum so they can accuse Ukraine of ‘invading Russia’
• Topics / Terrorism

Russia, Not Ukraine, Is Serial Violator of Ceasefire Agreement 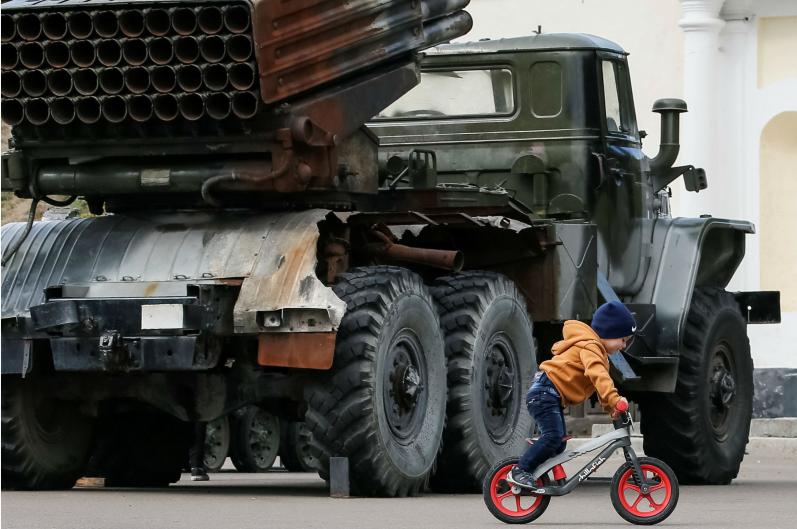 A boy rides a bicycle near a BM-21 Grad multiple rocket launcher system at an exhibition of military weapons and vehicles seized from pro-Russian separatists during fighting in eastern Ukraine, in central Kyiv, Ukraine, September 21, 2016. REUTERS/Gleb Garanich

Like many articles and analyses of the Minsk process, “Ukrainian Military Progress Could Violate Minsk Peace Process” lacks a clear geopolitical understanding of its context. Without this context, it is difficult to make sense of any facts presented.

Both the EU and the United States levied sanctions to encourage Moscow to end its aggression and to discourage it from the expanding the war further into Ukraine.

Equally important is that fact that the sanctions were levied not long before the Minsk I Agreement was negotiated in September 2014, but Moscow’s continuing aggression included the seizure of hundreds of square kilometers of additional Ukrainian territory. A Russian offensive violating Minsk I led to the negotiation of the Minsk II Agreement in February 2015, with terms far more negative for Ukraine. Those terms delayed the return of border control to Ukraine and permitted the Russian-controlled separatists to maintain their own military forces.

The bottom line is clear: Moscow is conducting a low intensity war in the Donbas to destabilize the government in Ukraine by producing regular Ukrainian casualties, seizing small increments of additional Ukrainian territory, and overtaxing the economy.

None of this appears in “Ukrainian Military Progress Could Violate Minsk Peace Process.” This is perhaps not surprising as the article is part of a generally superb series produced by DFRLab that is heavy on data, but short on larger analysis, or context.

But even here there is a problem because the article talks only about the possible Minsk violations by one party to the conflict, and the victim at that. This approach ignores the fact that the Russians and their proxies are responsible for most of the violations, and that Ukrainian violations are often in response to Moscow’s. The Ukrainians recognize that Russian violations have led to the loss of additional territory with no serious response from the West.

Ukrainian troops are adamant that they don’t respond with banned weapons. “If they shoot at us with mortars, we respond with machine guns,” Ivan Burdiuh, a press officer for the 30th Brigade, told The Daily Signal in February.

The best source of unbiased data about the fighting in the Donbas comes from the OSCE Special Monitoring Mission in Ukraine. Since the OSCE operates on consensus and Russia is a member, the OSCE Special Monitoring Mission (SMM) must be cautious in how it puts out information. While it reports violations on a daily basis, it does not aggregate them. And most of the violations that it reports are described as “undetermined.”

Still the SMM daily reports, if aggregated, yield useful information beyond the intensity of the ceasefire violations. In May, for example, the OSCE SMM reported that the Ukrainian side suffered the impact of 945 explosions, while the Russian side experienced only 145. The Russians have likewise proved a greater obstacle to SMM staff’s movements. In May, the Russians blocked access to SMM personnel 82 times, while Ukrainians blocked access 54 times. Such data are much more relevant to evaluate the ceasefire than the possible presence of new Ukrainian weapon systems near the line of contact.

In this article, the DFRLab does not meet the high standards that it set in its other work. Highlighting peripheral developments at the expense of constant ceasefire violations and ignoring context is both misleading and dangerous. It feeds the agenda of those who would like to end sanctions on Moscow. They argue that both Moscow and Kyiv are violating Minsk; therefore, there is no reason for disadvantaging Moscow by maintaining sanctions. It is not in our interests to provide ammunition to those who fail to address who is both the aggressor and the serial violator of Minsk.

John E. Herbst is the director of the Dinu Patriciu Eurasia Center at the Atlantic Council; he served as US Ambassador to Ukraine from 2003 to 2006.