Serious concern about motives as Ukraine detains brother of Mikheil SaakashviliPoroshenko strips political opponent Mikheil Saakashvili of his Ukrainian citizenshipIs President Poroshenko turning to selective stripping of Ukrainian citizenship?Poroshenko law could strip huge numbers of Ukrainians of their citizenshipUkrainian citizens are now a group at risk in Russian-occupied CrimeaRussia backtracks over Ukrainian citizenship in CrimeaRussian, or else: On how Russia is foisting its citizenship in CrimeaCrimean Tatars and others face citizenship dilemmaRussian methods: Calls for Crimea’s return to Ukraine could get you imprisonedMGIMO historian fired for article comparing Crimean annexation to Hitler’s AnschlussInformation channels at warDonetsk Front in Putin’s Dirty WarScurrilous rumours used to spread fear and distrust in Eastern oblastsAutoMaidan activist shot at near ChongarRussian troops already deployed in mainland UkraineThe Crimea is our Home: Get your troops out!Crimean "referendum" a grotesque farceCrimean Tatars call on all Crimeans to boycott "referendum"Avoiding Ukraine’s language minefieldsChief Rabbi and others dismiss Putin’s “anti-Semitic extremist” claims
• Topics / Politics and human rights 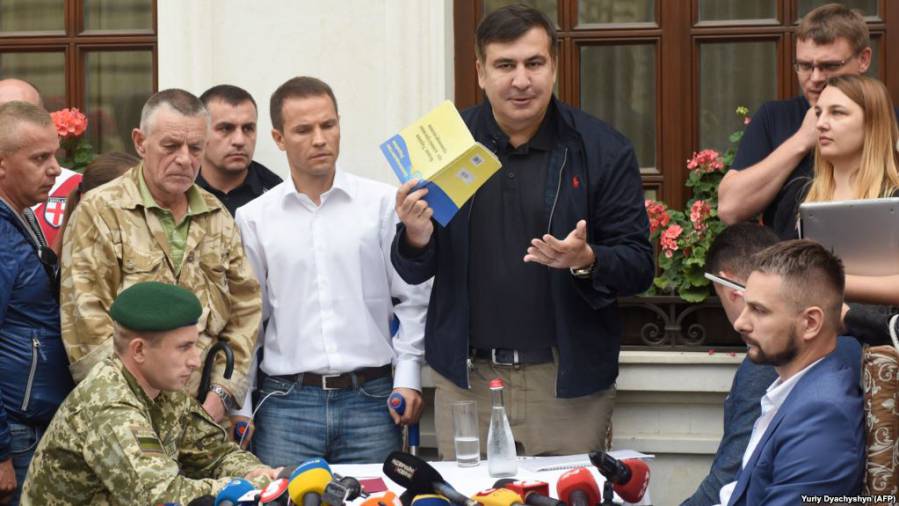 Mikheil Saakashvili speaks to the media while Ukrainian border guards try to hand him a protocol of administrative offense near the hotel where he is staying in the western city of Lviv on September 12.

On September 10, Saakashvili returned to Ukraine, vowing to contest Poroshenko's decision in court and arguing that it was a violation of the Ukrainian Constitution and international law.

RFE/RL spoke with Mark Ellis, executive director of the International Bar Association, about the issue of statelessness and what the legal arguments are on both sides of the Saakashvili case.

RFE/RL: Saakashvili says Poroshenko violated international law by revoking his citizenship. Is there anything to this argument? Do states have an obligation to avoid making people stateless?

Mark Ellis: In general, the answer as to whether or not states have the responsibility under international law to preclude the arbitrary cancelation of citizenship, the answer is "yes." International law in this field has been fairly firm on this. It emerged from the refugee crisis after World War II.

So you immediately see in the more prominent international declarations, including the Universal Declaration of Human Rights, they now recognize the right to nationality. And this is reconfirmed in a number of international treaties and texts, including various conventions that have been created since the end of World War II.

Generally, international law strictly limits the circumstances under which you can deprive an individual of nationality. That's kind of your base line that you start with and then you ask whether there are any exceptions to that fundamental right.

And there is generally viewed as one exception -- an important one -- that sets out that if nationality had been obtained by some type of misrepresentation or fraud, then a state does have a right to revoke that citizenship. Although if a state does do that, it has to be done under the principle of proportionality and it is not cut and dried. But that is generally the legal framework under international law that oversees and rules on this issue of citizenship and nationality.

RFE/RL: That is what Poroshenko has argued -- that Saakashvili failed to declare an ongoing criminal case against him in Georgia when he applied for Ukrainian citizenship.

Ellis: That, on the legal foundation, seems to be correct under law because, as I said, citizenship and nationality have always been seen as more of an issue under state sovereignty so, if a state makes that decision to revoke citizenship, then it can do so. But international law has sort of trumped that. It has set out pretty strict prohibitions for doing that.

The Ukrainian government takes the exception to the rule of not depriving an individual of citizenship by suggesting there was misrepresentation or fraud on the original application. Again, this is seen by international law as a legitimate position to take. But there are limits to that. You have to satisfy the principle of proportionality, which means you have to weigh the withdrawal of citizenship against the gravity of the proposed crime or misrepresentation.

And here I think the Ukrainian government gets itself into a bit of trouble because if you look at it, it was quite clear that it was known wide and far that Georgia had an extradition request out -- an extradition request that Ukraine initially had rejected. And so it was in major media outlets about the issue of fraud and yet Ukraine still gave Saakashvili his citizenship and nationality knowing this information.

So it seems to me that Ukraine could be stopped from relying on the concealment of those criminal proceedings when in fact it was public. If they had a concern, why didn't they express that concern at the time? So I think that will probably be a counter to the Ukrainian government's argument that it has a right to revoke citizenship.

RFE/RL: If Ukrainian courts uphold Poroshenko's decision, does Saakashvili have any international avenues of recourse?

Ellis: That is an interesting point about whether [Ukrainian courts will]...uphold the decision because Ukraine has incorporated in its own constitution these international protections against depriving someone arbitrarily of citizenship and it does also state that individuals have the right to appear in a fair, objective court proceeding and to argue their case and to be represented. So far, that hasn't happened.

First, there needs to be a domestic process where the defendant's rights are protected and he has the ability to argue his case. Internationally, I think it is going to fall more into the international court of opinion. I think this is where the case will ultimately end up, but first there will be a domestic focus.

RFE/RL: Saakashvili has also said he has "UN recognition of his status as stateless." What might this mean and does such recognition give him any rights or leverage?

Ellis: I haven't read precisely what his argument has been in regard to that. I think he has publicly suggested that this is a politically motivated action by Ukraine's government -- and it may very well be.

The reason you would argue that is that generally major human rights instruments, including the Universal Declaration of Human Rights, would prohibit a state's action against a citizen -- in this case, depriving him of citizenship -- if it is based on political reasoning. If it is a political act, then it would be denied. I think this is probably what he is arguing and that is a solid position to take because international law is very clear that it really does protect individuals from politically motivated acts from the state.

RFE/RL: This weekend Saakashvili more or less forcibly entered Ukraine and claimed that his revoked passport had been "stolen" by Ukrainian police. From the legal standpoint, was this a wise move?

Ellis: Saakashvili probably would not have been well-advised if he was following advice. I probably would have said, "No, you shouldn't do that." There is now concern, on his part, that even though Ukraine initially rejected Georgia's request for extradition, there is some discussion that that would now be changed. If he is apprehended and if the courts uphold the decision that he no longer has Ukrainian citizenship, then it seems to me it would be much easier to extradite him elsewhere. We'll see how that works.

But I suspect that he's again focusing on international opinion to heighten awareness of this predicament that he is in, in essence arguing that he is a stateless person and that that is not only inappropriate, but illegal, and he's requesting the international community to speak out to support him.

RFE/RL: In general, what factors must Kyiv consider in deciding whether to grant the Georgian request? And does Saakashvili's statelessness play any potential role in these processes?

Ellis: I think that the political motivation part of this is probably the most serious. Unless you were going to violate international law, you would have to be certain that any extradition request was being done consistent with international law, which would prevent an extradition if in fact the request was politically motivated. I think still the focus is going to be -- and should be -- on whether the decision by the Ukrainian president -- which, under the law, he's able to make -- was proportionate.

Is Ukraine protecting the rights of an individual not to be deprived of nationality? And by taking the action that Ukraine did, they clearly have created a situation where an individual now is stateless. Again, international law frowns upon that decision unless it can meet the proportionality test and reasonability test and due-process test. And I question whether those tests have been fully met to date by Ukraine in making its decision.

RFE/RL: Would Saakashvili's status as a stateless person have any impact on his extradition process?

Ellis: It would depend on whether or not the particular crime that he's being accused of committing has some universality to it. Is it possible to have him extradited to another country that was allegedly harmed by his actions? It is correct that if you are sending him back to a state where the individual is no longer a citizen, the requirements are pretty steep. You've got to find some type of foundation or basis for sending him back to a state where he is no longer a citizen. I'm not saying it is impossible, but I think it is much more difficult.

RFE/RL: Would you hazard a prediction at this point as to how the whole matter will be resolved?

Ellis: It is always difficult to do that when you are looking at principles of international law and the possibility that a state is trying to act in its own interests and, in doing so, would set aside international norms. I think that if you were adhering to the strict principles under international law against arbitrarily depriving somebody of citizenship, then I think Ukraine still has some ways to go in defending its decision to revoke [Saakashvili's] citizenship.

That's where I think we are right now. I think the onus is on Ukraine to justify under both its domestic law and its constitution why it has made the decision to deprive citizenship. I would suspect that the focus will still be on Ukraine to justify its decision. I'm not saying that Ukraine couldn't do that. I'm just saying that based on what I see now, Ukraine is falling short of that and will have to step up on justifying legally why it has made the decision that it made.