Russia under Putin: Small child solemnly swears to prosecute her mother if requiredMass burial site at Izium, imprisoned teenagers and other Russian war crimes in Kharkiv oblast Russian invaders remove Ukrainian language and literature from schools Information about Russia’s war crimes is now available in seven languagesFascism is here in Russia. Anti-war activities in Russia, 15-22 AugustEven Kremlin supporters admit Russia has created ‘a humanitarian disaster zone’ in occupied Ukrainian cities Russia plans special propaganda ‘lesson’ explaining to children in occupied Ukraine why the bombing of their cities is ‘liberation’Russia teaches Mariupol children to shoot and to hate Ukraine Those who unleashed this war will not go to Heaven. Anti-War activities In Russia, 7-14 August 2022Opposing the Orwellian State. Anti-war activities in Russia, 27 July-5 AugustRussia razes Ukrainian city to the ground and says ‘there’s no point’ to rebuilding it “He lay on the sidewalk, naming towns and cities in Ukraine”. A digest of anti-war activities in Russia, 23-29 JulyAmnesty International’s 4 August statement. A response by the “Tribunal for Putin” initiativeDirector of Amnesty International in Ukraine resigns in protest calling controversial Amnesty press release "a tool of Russian propaganda’ Invaders stage fake referendum so they can accuse Ukraine of ‘invading Russia’ Chief Kremlin propagandist calls Russia’s killing of elderly civilians – Hero of Ukraine Oleksiy Vadatursky and his wife - "denazification in action"Russian horrific castration of Ukrainian POW was about terror and preventing own soldiers from surrendering “Let’s Fight the Propaganda Together” Anti-war Activities in Russia, 9-16 July 2022Kremlin propagandist proposes to "share" plundered Ukrainian harvest only with countries who ‘behave’ and support Russia Necessary conditions
• Topics / News from the CIS countries 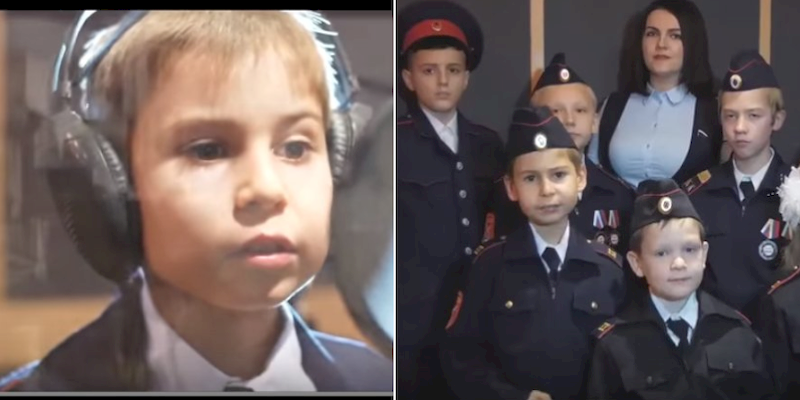 A ruling party MP in Russia has produced a video clip in which children enthusiastically sing of their willingness to ‘fight the final battle” for ‘Uncle Vova’, otherwise known as President Vladimir Putin.  They also promise not only to hold on to Crimea which Russia has illegally annexed, but also to reclaim Alaska.  While seemingly the initiative of Anna Kuvychko, a new United Russia MP doubtless eager to demonstrate her loyalty, this is not the first such video where children in uniform are used for unadulterated propaganda.

The clip has Kuvychko singing together with young police cadets, some under 10, from School No. 44 in Volgograd.  The words and music are by Viacheslav Antonov, who is apparently a taxi driver from the Moscow region.  His rendition, together with his young son, also has the lad leaping in to tell ‘Uncle Vova, we’re with you”.

Kuvychko has embellished her clip with images from abroad, clearly intended to demonstrate the chaos reigning there, and the country ‘deprived of a President’. All of this is, of course, in contrast to the children singing together in the studio or against a background of historical sites, including Mamaev Kurgan and the memorial complex marking the pivotal Battle of Stalingrad during WWII.

The words in the refrain about the world being tired of wars, especially sung by children, are reminiscent of Soviet propaganda songs, like “Do Russians want war?”  There is, however, a fundamental difference.  In that Soviet song, the children were there to reflect childlike innocence, a world in which, as the small child sang, there should “always be the Sun, Mama and me”.  Here the children sing that while peace would be good, “if the Chief Commander calls us to the last battle, we’re with you, Uncle Vova”.  If the children themselves only dimly understand what that ‘last battle’ suggests, what about their parents?

Some of the words of this “patriotic composition” are positively menacing:

“Our Sevastopol and Crimea we will retain for our descendants,

And return Alaska to the hearth of the homeland”.

By no means all view this as disturbing.  The report from the local publication bloknot-volgograd.ru, quoted under the video clip, is basically glowing.

“The text of the song talks about difficult diplomatic relations on the international arena in which Russia is proving unwavering and is determinedly upholding its own vector of development, despite pressure. Moreover, the children, inspired by the example of Crimea, hope for the reunification [sic] of other originally Russian territories. “Now they have other challenges before them, no less serious than before.  But they will definitely cope and win,” Kuvychko asserts.”

As mentioned, this is not the first such video.  On September 1, a little girl called Diana solemnly promised Alexander Bastrykin, head of the Investigative Committee that she would shop her mother if that were required by her work.  Bastrykin responded by embracing her and kissing her hand, while young boys a little older than Diana promised that they would make sure that she joined the investigators’ ranks after leaving kindergarten (details here).

The Crimean Human Rights Group and others have long warned of the dangerous level of militarization in Crimea under Russian occupation, including the use of children.  During official Russian festivities in Sevastopol on the third anniversary of annexation,  there was a choreographed item in which girls sing: “My country, my fate, my dream, my war”.  At that point, other children burst onto the stage waving mock machine guns around, with a culminating point seemingly the girls prancing about with Russian flags.

It should be noted that Putin himself clearly has a taste for such demonstrations of adulation normally seen among totalitarian dictators. Children can be heard singing Putin’s praise in his presence here and while it is unclear how many online birthday greetings are real, the Russian media regularly produces sycophantic reports about Putin’s dog, skiing, fishing, etc.