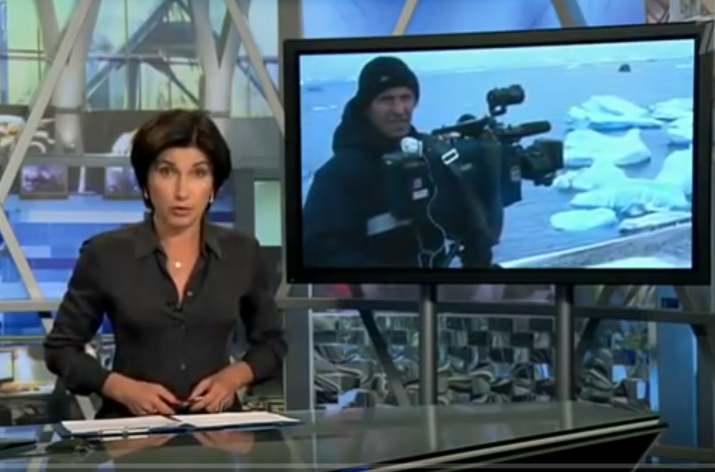 Russia’s Investigative Committee has charged the Ukrainian commander of a military unit with the ‘murder’ of Anatoly Klyan, a cameraman with the Russian state TV Pyervy Kanal.  Klyan was certainly fatally injured in the Donetsk oblast on June 29, 2014.  The problem is that Russia’s attempt to claim this was in an ‘attack on soldiers’ mothers and journalists’ was debunked immediately by a journalist colleague of Klyan’s who was convinced that the journalists had been sent there to be shot at, in order to provide good propaganda coverage.

It is precisely such propaganda that the Investigative Committee’s report on 27 February 2018 seems aimed at, since the ‘charges’ against the Ukrainian commander Mykola Malomen are in absentia and likely to remain so.

These charges include ‘the organization of the killing of a person in connection with carrying out their official activities, in a dangerous fashion by preliminary conspiracy and motivated by political hatred’.

Malomen is claimed to have issued the order to open fire to kill without warning on any armed individuals or civilians approaching the military unit.  This, the report asserts, resulted in them firing at “a bus with mothers of military conscripts wishing to hold negotiations about the return home of conscripts not wanting to take part in the fighting, and journalists of Russian and Ukrainian television channels”, among them Anatoly Klyan.  The bus had approached “during the night from 29 to 30 June 2014”, though the Investigative Committee claims that Malomen was aware that there were only unarmed civilians in the bus.

This was not what one eyewitness who had been invited to the same staged and fatal stunt reported.  Orkham Dzhemal’s article for Forbes.ru was posted on 30 June 2014.

In it, he explained that June 29 had been the last day of the ceasefire between Kyiv and the self-proclaimed Donetsk People’s Republic [‘DPR’].

The ‘ceasefire’ had been largely in name only, and Dzhemal gave details of previous attacks by the Kremlin-backed militants on Ukrainian military units.

The first had been in Donetsk, and after 6 hours of night battle, the military unit had been forced to surrender to the Russian and pro-Russian militants, with several officers taken prisoner.

The unit seized had been of no obvious value to the militants since it was basically responsible for convoying prisoners to and from the local remand prison.  Dzhemal had spoken with one of the militants who effectively admitted that the point of the whole exercise had been to take prisoners to use in exchanges for ‘DPR’ fighters.   Another regiment had not waited for such an attack and evacuated their men, but after setting off the ammunition stocks, thus depriving the militants both of hostages, and of trophies for their night offensive.

“The next attempt to seize a Ukrainian unit seemed less like a military operation, and more like provocation. The military stocks were still burning when the Donetsk Republic’s press service began ringing around journalists.  All were to gather near the regional administration building.”

A young man who introduced himself as ‘Gyurza’ spoke to the journalists explaining that they were to go, together with soldiers’ mothers, to the military unit in the township Spartak.  There was a lot of anti-aircraft ammunition, he said, but no more than 50 men – officers and conscripts guarding it.  He claimed that agreement had been reached with the commander that they would surrender without a fight.  “The mothers of soldiers serving there will come out with placards for additional moral pressure, and you’ll be able to get sensational material. I will carry out the negotiations, I have experience in this”, Gyurza asserted.

A separate minibus for journalists was laid on, however Dzhemal says that some kind of intuition prompted him to travel to the ‘negotiations’ by taxi, together with colleagues from LifeNews.

They arrived first and stopped on the road, waiting for Gyurza and their colleagues.  They had sensibly got out of the car and turned off the lights, but had obviously been observed since within three minutes there was a hail of machine gun fire, flares and then grenades fired at the car.  They managed to crawl to safety, from where they watched the ‘main part of the tragedy’ unfold.

The minibus with journalists arrived.  The driver apparently tried to put a white scarf out the window, before turning towards the military unit.  It is likely that the white scarf was not even seen in the dark, and the bus came under heavy fire.  The driver was wounded, and later died, and Klyan received a fatal bullet wound.

“There will probably now be a whole lot of statements about the inhuman Kyiv fascists who shoot journalists. Although all who were there, without exception, understand that we were simply placed under fire. It’s not for nothing that they call this war “mainly information”: a busload of journalists shot at is also a propaganda achievement, no worse than a military unit that’s surrendered,” Dzhemal wrote.

The propaganda was swift in coming with both the Russian Foreign Ministry and the state-controlled media claiming this to be “brutal and totally lawless persecution of Russian journalists in Ukraine”.

The international media NGO Reporters without Borders was also sceptical, asking pertinent questions about why the bus had set out with journalists and soldiers’ mothers so late at night, and how, in the dark, the Ukrainian officers were to have determined that the bus was carrying civilians.

It is easy to guess why Russia’s zealous ‘investigators’ have taken almost four years to announce these charges.  Orkhan Dzhemal’s testimony should not be forgotten.