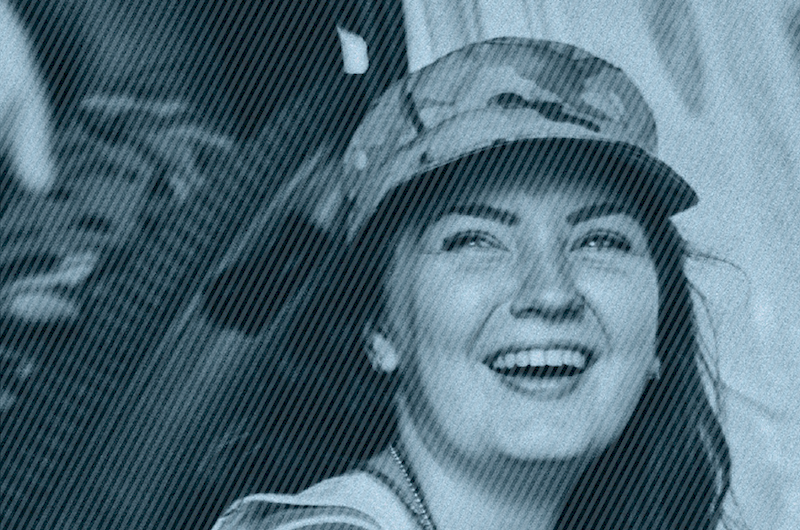 In Ukraine, Alina Viatkina served as a paramedic of the volunteer medic battalion Hospitallers, which is part of the Right Sector, a nationalist party. Credit: UkraineWorld

From the Atlantic Council

“We were moving through flashing fields. And I realized history was evolving right in front of my very eyes. I had yellow goggles on; everything was yellow with them. I took the goggles off, and then the wind started blowing in my eyes. I couldn’t see anything,” says volunteer soldier Bizhan Sharopov, who fought against Russian-backed separatists in the Donbas in eastern Ukraine in 2014-15. He’s talking about the battles for Lutuhyne and Heorhiivka that took place in the summer of 2014.

Bizhan was among Donbas veterans participating in the “Voice of War” project, which teaches writing skills so that veterans can share their experiences about the war in eastern Ukraine.

We met them and talked about their memories. Their stories are a mosaic of danger, difficulties, heroism, friendship, and work. Here are some.

“It was hard. It was cold and damp. No sleep. No food. Some guys even imitated shell-shock to get out,” says mobilized soldier Vitalii Piasetskyi, who defended Donetsk Airport in January 2015.

In mid-January, the separatists controlled all the floors above and beneath the one with Ukrainian soldiers. They were throwing grenades through a hole in the terminal’s ceiling, with tear gas. “You cough up your lungs, lie on the floor, and can’t do a thing,” the soldier adds.


“You know that the next bullet or a fragment might be for you. But you don’t fixate on fear. You just do your job: you are firing back. You are helping the wounded. You are making barricades,” says Vitalii.

Another hot spot was Ilovaisk in August 2014. Ukrainian forces were withdrawing from the besieged town through a humanitarian corridor agreed on with the Russians. But the Russian forces opened fire. “First they did not expect our counterattack: their equipment and people were so close to us. We destroyed what we could. They asked for a truce to recover their wounded and killed. But what the Russians really wanted was to move their equipment a safe distance away: our maximum firing range was only 600 meters through grenade launchers,” says a volunteer soldier, Ihor Mykhailyshyn, of the Donbas Battalion.

Ukrainian soldiers knew that they had already lost the battle of Ilovaisk. Those who remained surrendered to Russian army, not to cossacks or separatists, so they had the illusion that they would be treated in a civilized way. “Both of us are armies: at least they won’t kill us, we thought,” continues Ihor. “Nobody told us where we were going. One local saw the road to Donetsk through a slit in a truck. And we started saying farewell to our lives.”

The separatists kept the captives in a basement. “Two days later they brought us food. Why would you feed death row prisoners? Then we realized that they wouldn’t kill us,” recalls Ihor.

For six weeks, Ukrainian soldiers sat in this basement. Then the separatists transferred the captives to rebuild Ilovaisk. Two and a half months later—just before New Year’s Day 2015—the Ukrainian prisoners of war were exchanged and went home.

Women face particular challenges in war. Alina Viatkina, a paramedic of the volunteer medic battalion Hospitallers, which is part of the Right Sector, a Ukrainian nationalist party, confesses that women competed to see who could be more similar to the men. “You couldn’t identify yourself with other women. I talked to or took smoke breaks mainly with men.”

Alina provided medical aid to the injured during the battle that raged at Donetsk Airport in the winter of 2015. “We regularly went behind Vodiane, closer to the airstrip. We waited for wounded troops for eight to ten hours. Some soldiers put alcohol wipes under their tongues to wake up. We barely slept. I had never drank so many energy drinks before,” recalls Alina.

War is not only about heroes. It’s also a job, a routine job, says Yurii Rudenko, a serviceman who guarded military staff in Kramatorsk (2015-16) and Chasiv Yar (April-July 2016). It was a period of trench warfare in the Donbas with frequent truces. It was calmer than manoeuvre warfare, and the main challenge for soldiers was to stay on their toes.

During his service, the Ukrainian army often shot down Russian surveillance drones. “In my unit, we were training to launch fire right after the order—in no more than forty seconds. This helped keep us busy,” Yurii continues.

Talking about the situation after the so-called ceasefire of February 2015, which was often violated, Vasyl Antoniak, a volunteer soldier fighting in Donbas in 2014-15, says, “The longer you are at war, the more you like it. When it’s calm and there is no shelling, you start worrying,” he adds.

I asked Vasyl what the scariest moment was. He told me it was the retreat from Khriashchuvate to Shchastia. “We had to defend the bridge in Shchastia and blow it up when needed. We were awaiting a massive advance of Russian tanks and, therefore, withdrawing our weapons. Looking at this was very painful. We heard a constant hum night and day. And I realized that this was it. ”

When soldiers come back home, they see a totally different reality: they see peace. But they also want to see positive changes in Ukraine. “I believe that our country has a future—or else my war experience and the death of my comrades were in vain. I can’t accept that,” says Vitalii Piasetskyi.

Ruslan Minich is an analyst at Internews Ukraine and at UkraineWorld, an information and networking initiative.

Editor’s note: UkraineWorld has launched a three-part series, “The Voices of Ukrainian War Warfighters" that will be published weekly by UkraineAlert.