Ukrainian sentenced to 8 years on bizarre ‘sabotage’ charges in Russian-occupied CrimeaUkrainian political prisoner faces death threats in Russia for being from Ukraine and MuslimHow do you explain that Daddy is a political prisoner far away in Russia?Donbas Militants and Russian FSB Coordinate Fake ‘Ukrainian Saboteur’ ArrestsRussia accuses Ukraine of Trying to Sabotage Crimean Electricity with a Handsaw
• Topics / The right to a fair trial
• Topics / Human Rights Abuses in Russian-occupied Crimea 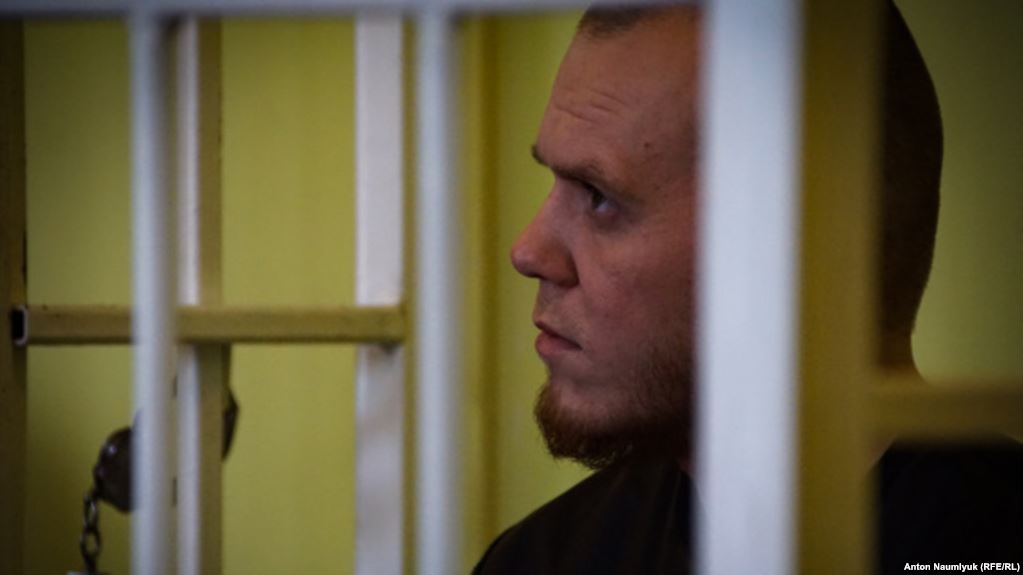 A court in Russian-occupied Crimea has upheld a shockingly high 8-year sentence on Hennady Lymeshko, a young father from the Kharkiv oblast and one of the ever-increasing number of Ukrainians whom Russia’s FSB forces to ‘confess’ on camera to supposed ‘sabotage plots’.

Since the indictment differed significantly from his ‘confession’, it seems likely that Lymeshko’s mother Rimma Ryzhkova is right in believing that the ‘confession on camera’ was made under torture or other forms of duress. He never had an independent lawyer, which may have influenced the fact that he did not later retract the initial ‘confession’, but he was undoubtedly promised a lower sentence in return for not denying guilt.  He had only been provided with a state-appointed lawyer three days before the original ‘trial’ on 10 May 2018, and was clearly not advised to ensure that he had a written agreement regarding the terms of his ‘cooperation’.   In short, he was tricked with the prosecutor demanding eight and a half years’ imprisonment in a maximum security prison.  It was claimed that Lymeshko’s alleged political motive of “hostility to the Russian Federation in connection with reunification (sic) of Crimea” constituted an ‘aggravated circumstance’.  This ‘trial’ at the Sudak District Court lasted all of an hour, with ‘judge’ Yevgeny Rykov sentencing Lymeshko to just six months less than had been demanded by the prosecution.

Lymeshko’s right to a fair trial continued to be grossly violated.  Although the ‘lawyer’ did lodge an appeal on his behalf, she does not appear to have even seen the need to appear at the appeal hearing on 24 July.  Lymeshko effectively represented himself, asking for the sentence to be reduced to four years and denying that he felt any hostility to the people of Russia. “if you look at the material of the case, you will understand that none of it is how it looks”.

The appeal was rejected, and the sentence has now come into force, despite serious doubts about everything to do with this case, including the methods that the FSB used to extract the first ‘confession’.

There was never any objective evidence to back the FSB’s claim in August 2017 to have averted acts of sabotage, only this ‘confession’ from Lymeshko, who showed signs of having been beaten,  On 15 August, the  FSB claimed  that Lymeshko had been arrested on August 12, after he arrived in Crimea on August 9.  They asserted that through his arrest, they had “prevented several acts of sabotage against infrastructure and vital services in Crimea”

In that statement, the FSB called  Lymeshko  “an agent of the SBU [Security Service] in the Kherson oblast, sent to Crimea to carry out acts of sabotage” and claimed that he had worked as a senior reconnaissance officer in the Ukrainian armed forces in the ATO zone (the fighting in Donbas).

Ukraine’s Armed Forces confirmed that Lymeshko had been a contract serviceman from November 2016 through May 2017, but said that he had been dismissed as unsuited to the job, and that he had no ties to the military.

All of this was broadcast on Russian television, together with Lymeshko’s confession, to having been in a sabotage group controlled by the SBU since the autumn of 2015.

The ‘confession’ was less than convincing, and not only because of the marks suggesting physical force had been applied.  Lymeshko was clearly trying to provide answers required of him, and it was also obvious that the video was not continuous, but made up of separate parts pasted together.

Perhaps the most damning thing was that for all the original claims and Lymeshko’s own supposed confession, the 25-year-old ended up charged only with possession of a weapon and the illegal production of explosive devices, with the sabotage plot and SBU forgotten.  An eight-year sentence is probably up to double the sentence that might be expected, without the alleged ‘hostility’/