Putin has declared war, but not just against Ukraine, with his proposed constitutional changesRussian invaders remove Ukrainian language and literature from schools Fascism is here in Russia. Anti-war activities in Russia, 15-22 AugustRussia teaches Mariupol children to shoot and to hate Ukraine Conflicting values and conflicting narratives: the case of Russia’s war on UkraineInvaders stage fake referendum so they can accuse Ukraine of ‘invading Russia’ Russian prisoners offered big money and ‘amnesty’ to kill for Russia in Ukraine Russia confirms plans to annex occupied parts of Zaporizhzhia and Kherson oblastsKremlin propagandist proposes to "share" plundered Ukrainian harvest only with countries who ‘behave’ and support Russia Missing persons and enforced disappearances in the Kherson Region (24 February-24 June 2022)Russian proxy ‘Donetsk republic’ threatens foreign defenders of Ukraine will be executed, with families not told whenFormer HR Ombudsman Lyudmyla Denisova on her dismissal, 4 years of work, Ukrainians in occupied areasRussia begins propaganda of war against Ukraine at pre-school level Covert mobilization and Ukrainian conscripts from occupied Crimea sent to die in Russia’s war against Ukraine Russia instals FSB man, other Russians to ‘govern’ occupied Kherson where the population hates themRussian Prosecutor General given power to close media for ‘discrediting the army’ through truth about the war against UkrainePatterns of Resistance are changing. A Digest of Protests in Russia (17-24 June 2022) Russia produces a variation of easily disproven lies about its horrific war crime in Kremenchuk Disappearances in the Zaporizhzhia Region (24 February to 18 June 2022)Collaborators with Russian state terrorism should be thrown out of International Federation of Journalists
• Topics / News from the CIS countries 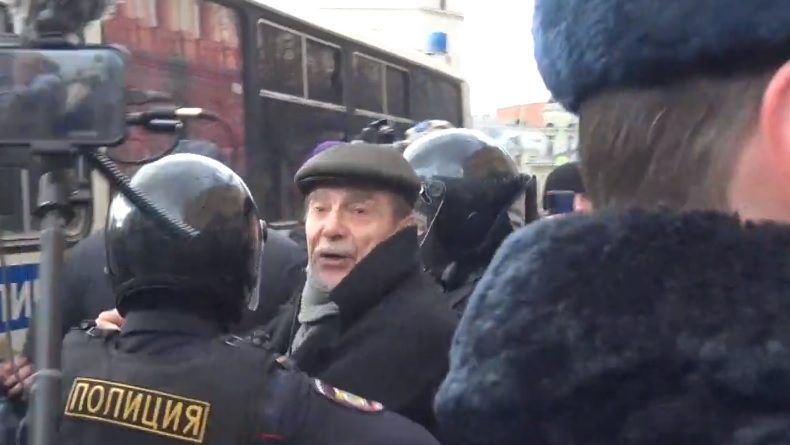 Around 50 people were detained on 14 March outside the FSB building in Moscow while trying to hold single-person pickets against political repression and constitutional amendments that will allow Vladimir Putin to remain President until (at least) 2036.  Among those detained was 78-year-old human rights defender Lev Ponomaryov, who was then reportedly hit at the police station by a masked police officer without insignia. Ponomaryov has been hospitalized and told the BBC Russian Service that he does not remember being beaten, but that they were all treated very roughly, and the mark under his eye indicates that at least one blow was dealt to his face.  He says that a young man who was detained at the same time was badly beaten.  They were among 11 people, including several human rights activists, taken to the Tagansk police station.  Members of a public monitoring committee present demanded that lawyers be allowed to speak to the protesters.  Instead the police tried to take the protesters’ passports and their phones away from them.

Single-person pickets are essentially the only legal form of peaceful protest still available in Putin’s Russia.  Legal, does not mean that people are not detained, however, and OVD.info reports that around 50 people were taken into custody on Saturday afternoon while waiting in line at the FSB building for their turn to hold a peaceful picket against political persecution.

The totally peaceful protesters were demanding the release of Russia’s ever-mounting number of political prisoners, however their protest was also over ‘constitutional amendments’ which the Kremlin is pushing through to enable Putin to be ‘President’ until 2036.  Theirs was not the only protest which the regime is seeking to crush.

Roskomnadzor, Russia’s effective censor, has also blocked the website of a civic campaign against the proposed amendments.  Few would seriously believe that the ‘referendum’ on Putin’s amendments on 22 April will be a fair vote, but presumably the Kremlin was worried that the other plebiscite on this website might show a radically different result.

The civic campaign ‘Net”’ [‘No!’] was collecting signatures under a manifesto calling on people to vote on 22 April against the amendments.  The site said that the activists understand that the vote will not be open and honest, “however silence will be interpreted as consent.”   Grani.ru reports that the manifesto had already been signed by 50 thousand people, including 120 politicians and human rights activists.

Although the order to block the site was officially issued by the Tagansky District Court in Moscow, it was Roskomnadzor which applied for the ban and received it the very same day.  it was claimed that there had been a breach of the law on information, with the article given being about infringements on personal data infringements. 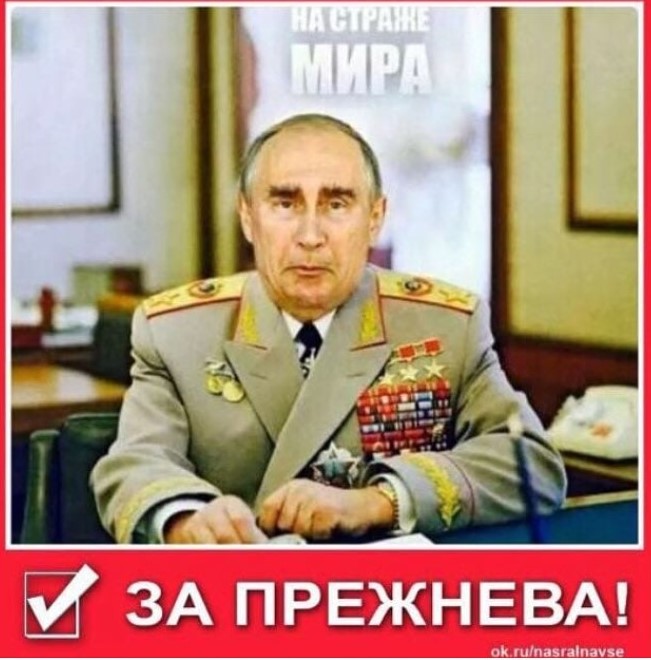 For Prezhnev Both the name and the image merge Putin with Leonid Brezhnev, who died in office in 1982, aged 76

It was clear when Putin first announced plans for a constitutional shakeup on 15 January this year that one of the reasons was to ensure his grip on power at the end of his fourth presidential term (or fifth, if you count the term as nominal prime minister, but actual leader, after the first two terms).  On 10 March, it turned out that he had no intention of even nominally relinquishing power.  First the State Duma and Council of the Federation (the upper house) voted for an amendment that would allow all presidential term limits to be set at zero, meaning that Putin would then officially be free to be president for two more terms.  It was claimed that this would need to be approved by the Constitutional Court, although that was understood to be a formality. So too was the support received from two thirds of the regional legislative bodies, as well, illegally, as the so-called parliament in occupied Crimea. On 14 March Putin signed the law, which will now be sent to the Constitutional Court which will, presumably, just as swiftly approve it.

Since the last two presidential elections were already heavily rigged, and this vote will be without independent observers or proper rules preventing falsification, it seems safe to assume that the only imponderable about the 22 April event is the percentage supposedly in favour of all these amendments, including that which will see Putin, if he lives that long, President until he’s 84.  He would thus be six years older than the symbol of Soviet stagnation and corruption, Leonid Brezhnev.  The latter, however, only managed to hold office – as General Secretary of the Soviet Politburo – for 18 years, whereas Putin came to power at the beginning of 2000 and has essentially never left.

This has been heavily criticized as an attempt to usurp power.  It is, in fact, only one of many reasons why opponents believe that a constitutional coup is taking place. One of the most shocking amendments is in the provision that allows Russia to flout international agreements if the largely subservient Constitutional Court claims that its provisions do not comply with the Russian Constitution.

As reported, Russia has already passed such legislation reserving ‘the right’ to not comply with judgements from the European Court of Human Rights on exactly the same pretext.  Since this new Constitution will certainly try to legitimize Russia’s illegal annexation of Ukrainian Crimea, it will be adopted in contravention of international law, including many international treaties that Russia has not withdrawn from.   This is undoubtedly another act of hostility against Ukraine, but is also an assault on international law and practice.

There are ongoing protests against the amendments, with people holding placards suggesting turning the political sentences against an ever-rising number of Russian and Ukrainian political prisoners to zero, not the presidential terms; or changing the President, not the Constitution.