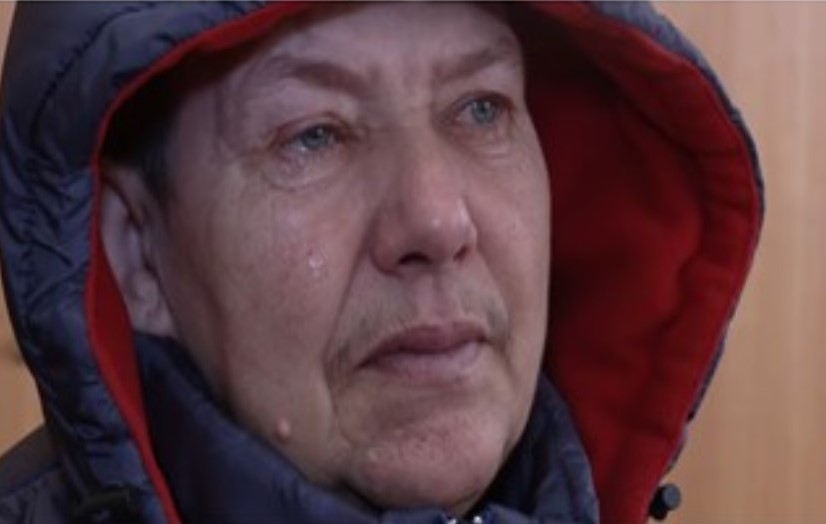 Hanna Havrylina, Head of Hremiach, wearing a hood because the Russians forcibly cut her hair off Screenshot from the Suspilne interview

Hanna Havrylina, Head of Hremiach, a village in the Chernihiv oblast, was abducted by the Russian invaders on 20 March, held prisoner for 20 days and tortured.  Her tormenters even forcibly cut her hair off, evoking involuntary associations with the Nazis who used to shave the heads of Holocaust victims.

She was seized by the Russians near the school in Hremiach, blindfolded and driven away.  She does not know where she was taken, except that she was brought to a cold railway carriage.  The Russians fired shots just above her head three times and threatened to shoot her in the knees.  After that the interrogations began, with her captors putting a bag over her head.

Her captors then took her to the Kursk oblast in Russia where she was held prisoner for about a week in a tent camp.  It was bitterly cold, and they wouldn’t let her sleep,  while forcing her to work, heating the tent with logs.  There were a lot of other prisoners, she says, and, after she asked two young lads in a whisper where they were from, she understood that they were all from Ukraine.

She was later moved to a SIZO, or remand prison, with her captors forcing her to undress, taking her rings and earrings, as well as a thousand UAH that she had in her pocket.   The Russians who had invaded her country claimed that she had directed artillery fire for the Ukrainian Armed Forces.

“We’re brothers, we came to liberate you,” her captors said.  “I say and what good have you done?  Who asked you for that?   The Russians’ response was to force her into a chair, but off her hair and then send her for a wash in cold water and to the cell.  She was initially held with four other Ukrainian women – three border guards and a civilian from Chornobyl, who said that she was a correspondent.

Havrylina can scarcely speak when she recalls the daily interrogations, and says that her tormenters hit her around the head with a lock. They were allowed to the toilet just three times a day.

The three border guards were released on 31 March, leaving her and the woman from Chornobyl.  The latter was so desperate that she used a sheet to try to hang herself.  After that, Havrylina says, their captors took their sheets and towels away. She doesn’t know what has become of the woman who remained behind when Havrylina was released.

She was taken from Kursk to occupied Crimea by plane, and then to the Zaporizhzhia oblast for the prisoner exchange on 10 April.  She was among 26 Ukrainian POWs and civilian prisoners who were released.  When they finally got into the vehicle to return home they sang the Ukrainian national anthem, cried and hugged each other, happy to be on their native soil.

The Russian invaders began abducting local leaders; journalists and civic activists in essentially all populated areas that temporarily came under their control.  Just in the Zaporizhzhia oblast, from 19 March to 9 April, the Russians abducted 106 people, including 21 representatives of the local authorities.

Two Kherson oblast journalists Oleh Baturin and Oleksandr Hunko were seized by the Russians, while a third journalist Kostiantyn Ryzhenko was forced into hiding after the Russians came looking for him.  Hunko was released after four days, Baturin after eight days of torture and threats against his family. The Russians also abducted two women journalists from the Zaporizhzhia oblast.  One was released fairly soon afterwards, however Iryna Dubchenko was seized on 26 March and taken to the Russian proxy ‘Donetsk people’s republic’ “for trial”.  She was finally released, possibly in the same exchange as Havrylina on 10 April.  There were also very real concerns for the health or life of Viktor Maruniak, Head of the Stara Zburivka Council in the Kherson oblast.  It was reported on 12 April that he has been released, though no further details are as yet know.

These are just a few of a very large number of abductions since Russia’s full-scale invasion on 24 February.  Since Olha Sukhenko, Head of Motyzhyn (Kyiv oblast), her husband and their son, Oleksandr, a well-known footballer, were murdered soon after being abducted by the Russians, there are very real grounds for concern about all such barbaric attacks on civilians.