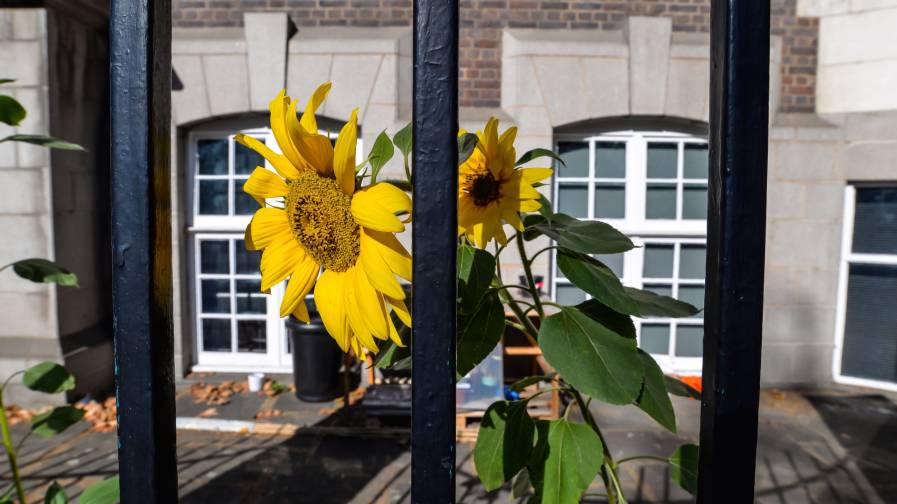 Under Article 391 of the Criminal Code (CC) of Ukraine ”Persistent disobedience to lawful requirements of authorities of a correctional institution, or any other resistance to lawful actions of such authorities in discharge of their functions, by a person who serves a sentence of restraint of liberty or imprisonment, where that person had been penalized for his/her misconduct by placement in a separate cell or a more restricted regime of service within one year”, shall be punishable by imprisonment for a term up to three years.

Article 391 of the CC is usually applied in the following way. The prison administration imposes numerous disciplinary sanctions on a prisoner, as a punishment he is transferred to disciplinary isolation, then to a cell, which is a reason to apply this Article. The prisoners usually cannot appeal against disciplinary sanctions, which are mandatory prerequisites for the initiation of criminal cases, and the sentences themselves, due to obstruction by the administration of prisons and pre-trial detention centers in access to legal aid, correspondence, etc.

The very fact of including this norm in the CC of Ukraine was subjected to devastating criticism in numerous scientific works. The arguments can be summarized in the following way. Article 391 of the CC directly contradicts the conceptual grounds of the CC of Ukrainein the edition of 2001, according to which the legislator abandoned references to administrative prejudice as a condition of criminal liability, which led to the fact that administrative offenses were automatically recognized as crimes when repeated. The application of administrative (disciplinary) prejudice contradicts Articles 21 and 24 of the Constitution of Ukraine regarding the equality of citizens before the law, as it constitutes discrimination. It is not clear why some citizens should bear administrative or disciplinary responsibility for certain offenses, while others should bear criminal responsibility.

In addition, it seems outrageous and incompatible with the fundamental principles of the rule of law, when a person sentenced to imprisonment, who has already suffered significant legal restrictions, in the case of committing acts that are essentially disciplinary offenses, receives a much stricter additional criminal liability for this and, usually, a new term of imprisonment.

It should be noted that Article 391 is a rudiment of the Soviet punitive system, it is a slightly modernized version of Article 183-3 of the CC of the Ukrainian Soviet Socialist Republicin the edition of 1960 (the article included in 1983). However, even totalitarian Russia has already abolished this norm. Of the post-Soviet countries, it is still used only in Ukraine and Belarus.

The law application practice of Article 391 also causes concern. Thus, administrations often initiate criminal proceedings under Article 391 against convicts who for some reason get into a conflict situation with them. Such reasons are often the reluctance to work for free at "black" illegal enterprises in the colonies, reluctance to comply with unspecified requirements of the institution's administration, "indecent" article under which the individual was convicted, "indecent" circumstances of a criminal case in which the individual was convicted, personal conflicts between prisoners and the administration or the prisoners who are"administrative assistants", etc. In order to initiate proceedings under Article 391 against such "conflict"prisoners, the administration of the institution only needs to impose a number of disciplinary sanctions on the prisoner, which, as already noted, the prisoners are almost unable to appeal. Often, such charges are artificial and are used only to formally meet the requirements for initiating criminal proceedings under Article 391.

Of course, there are normative requirements for prisoners to behave correctly with the administration, to stand in line during regime measures, to perform work on the improvement of the colony and to clean the premises during duty. But to regard non-compliance with such requirements as a crime punishable by up to three years of imprisonment is inadequate from the point of view of the proportionality of the punishment to the committed misdemeanor. Unfortunately, most of the prison employees consider the absence of a badge, a bed not made according to the standard, wearing a uniform not according to the established standard, keeping a charger and/or a mobile phone, etc., to be elements of the crime under Article 391. In addition, no normative legal act contains an exhaustive list of misdemeanors for which certain types of disciplinary sanctions may be applied. This gives the administration a very wide margin of abuse in the imposition of fines on prisoners, which then form the basis of Section 391 charges. 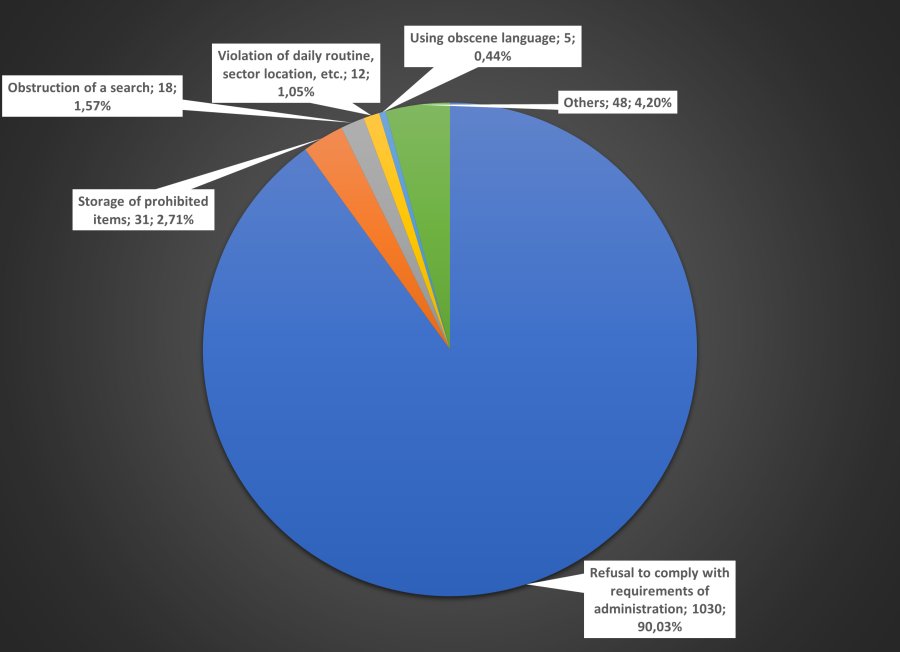 The number of sentences by type of refusal to comply with the requirements of the administration from 1 January, 2010 to 1 July 2022 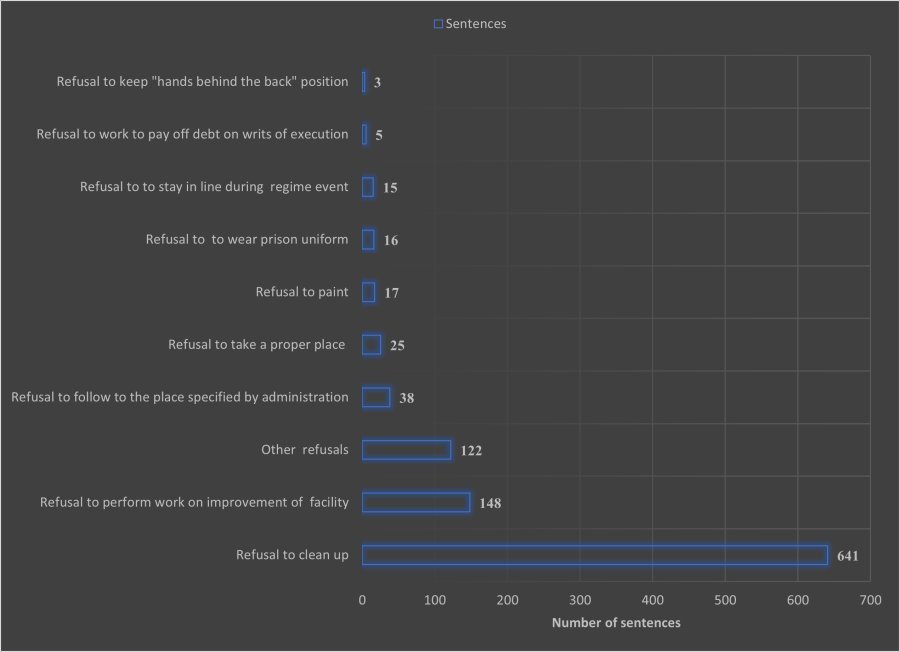 It draws attention to the fact that the criminal punishment for such actions as: "slept in the wrong place", "closed the viewing window", "was unshaven in the formation during the breakfast", "smoking in an unspecified place", "failure to carry out the command "Rise"", "tactless behavior", "uttering obscene language" amounted to a year of imprisonment or even more! And the refusal to keep hands in the position "behind your back"caused two years of imprisonment!

Only two sentences out of 1,144 have signs of justification - three years of imprisonment for "Damage to the premises of the duty unit and barricading of the correctional center employeesin the premises of the duty unit" and for "Arbitrarily leaving the territory of the prison". However, the qualification of these actions under Article 391 seems incorrect, and the actions of the prisoners in these cases should have been qualified under other articles of the CC of Ukraine.

96,77% of the cases concerned the imprisonment for a certain term. There were judges who did not want to follow the instructions of the prison administration. In 7 cases out of 1144 (0,61%) there were acquittals. The most lenient punishments include sentences in which the punishments were not associated with deprivation of liberty at all, or were associated with a term of imprisonment of less than 1 year. There were 29 such sentences: 150 hours of public service, 5 punishments in the form of fines (510, 850, 1700, 6035 and 8500 Ukrainian hryvnias), 23 sentences with punishment in the form of arrest. 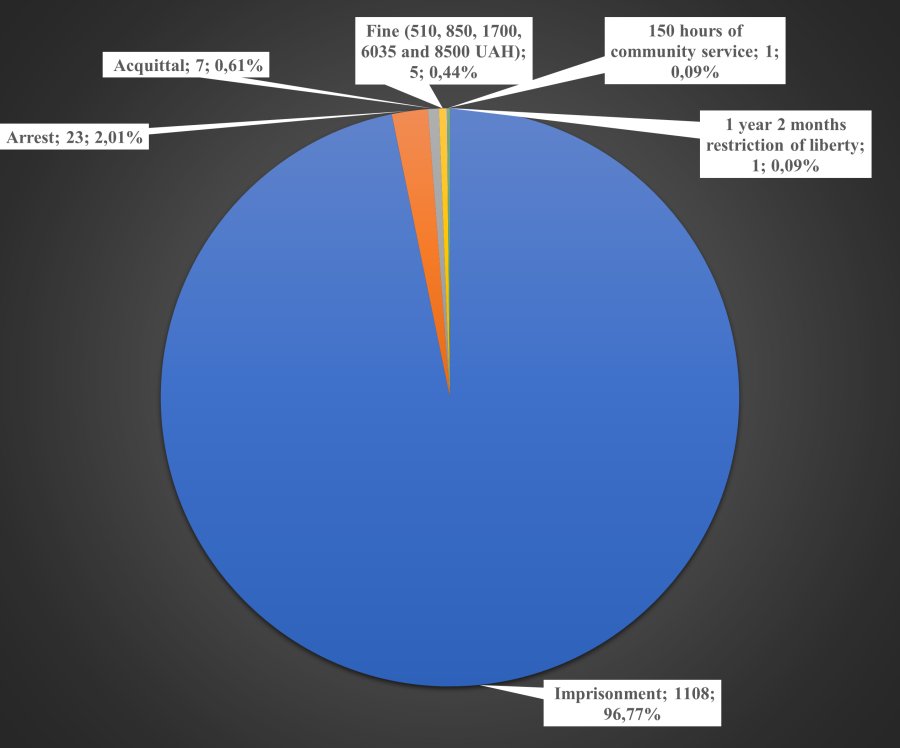 The number of sentences by the term of the imposed punishment in the form of arrest from 1 January, 2010 to 1 July 2022 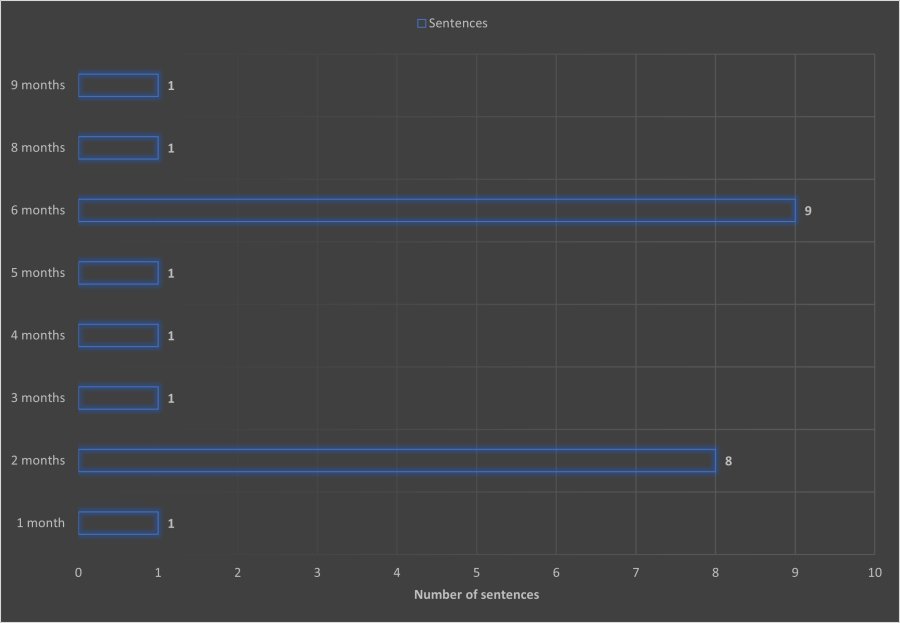 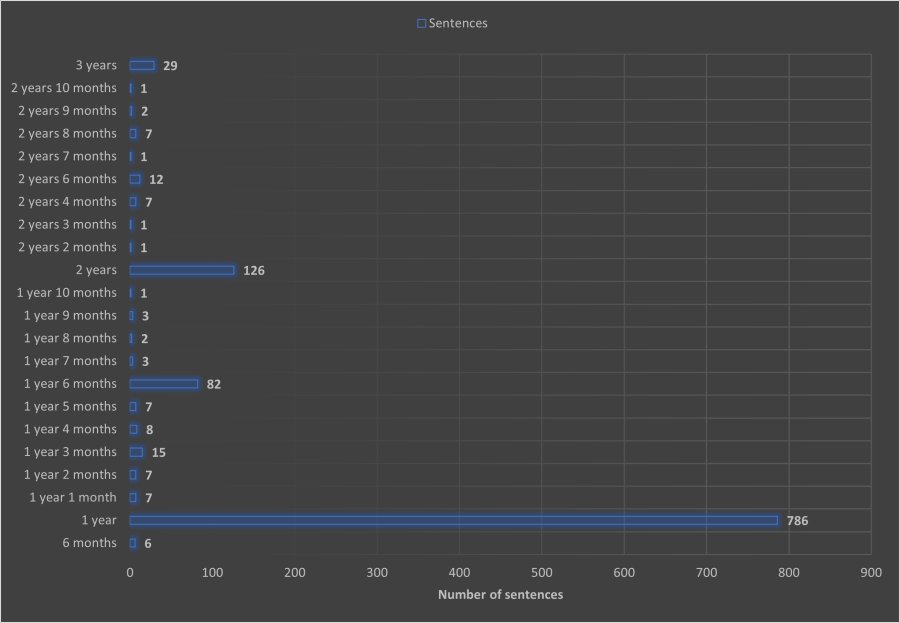 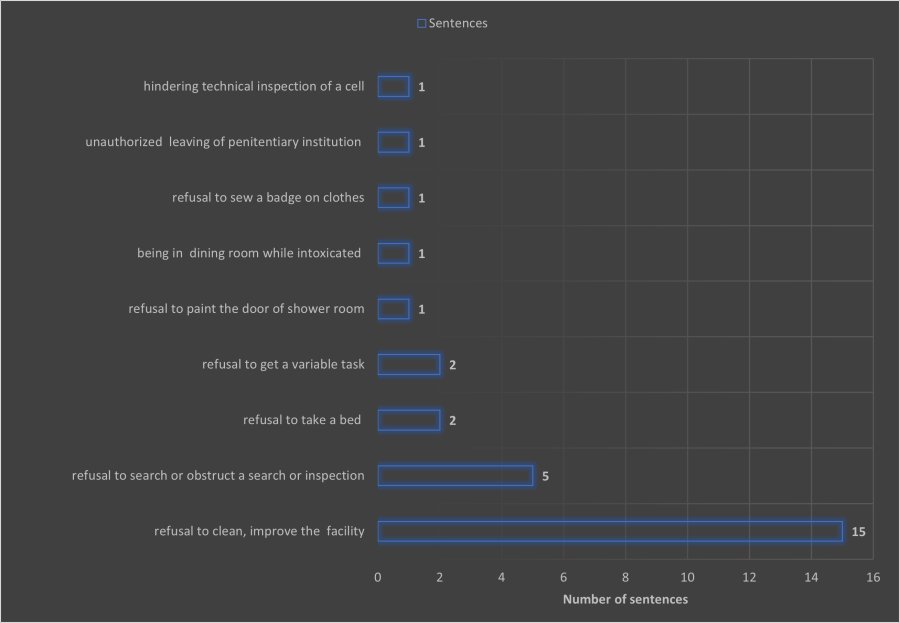 The maximum sentence of 3 years of imprisonment in the period from 1January 2010 to 1 July 2022 was imposed on convicts who, at the time of initiation of criminal cases under Article 391, were held in the following prisons: 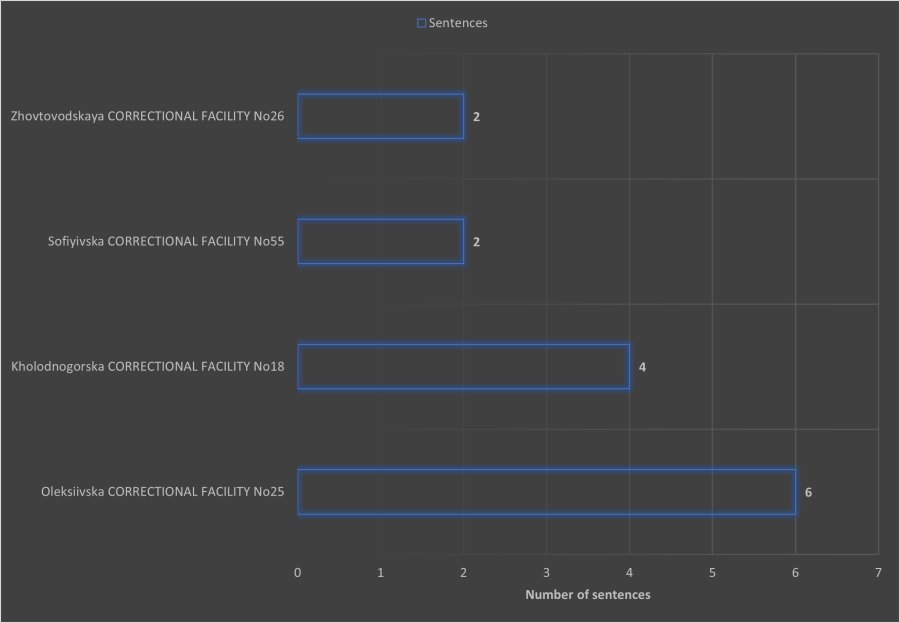 16 other cases are in one prison.

The greatest number of sentences concerns the prisoners from Kryvyi Rih correctional colony No.80 – 66 cases. Kharkiv colonies take the second and third places: Oleksiivka colony No.25 – 46 sentences (all punishments for the refusal to clean the cell!) and Dykanivka colony No.12 – 41 sentences. The third place is shared with Synelnykiv colony No.94. 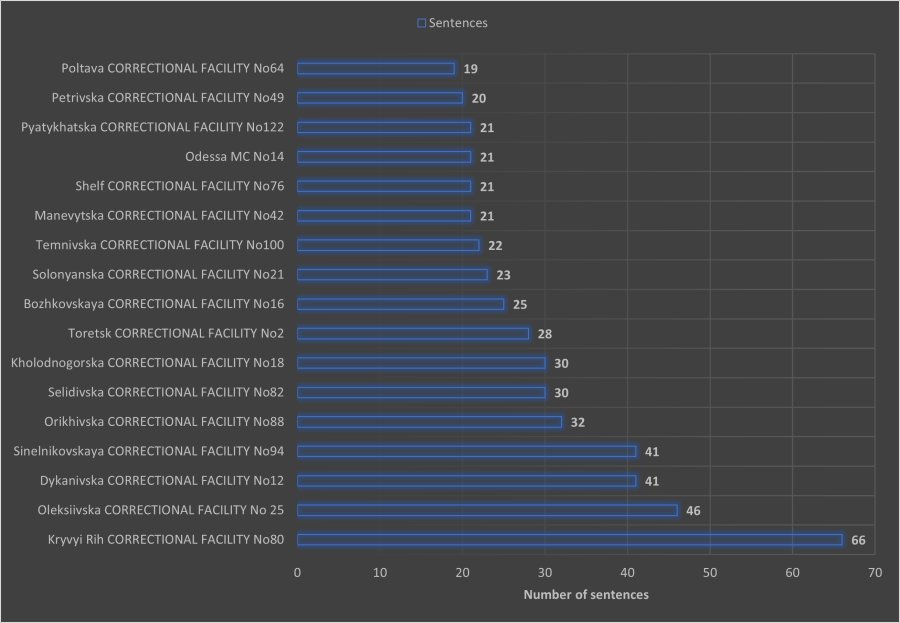 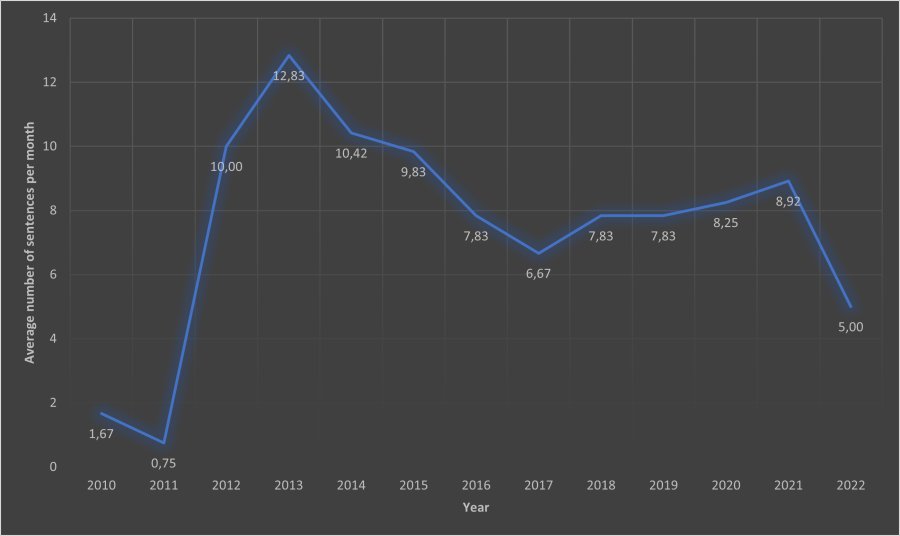 First of all, we are interested in the practice of applying Article 391 in recent years. In the period from 1 January 2020 to 1 July 2020, 236 sentences were handed down. 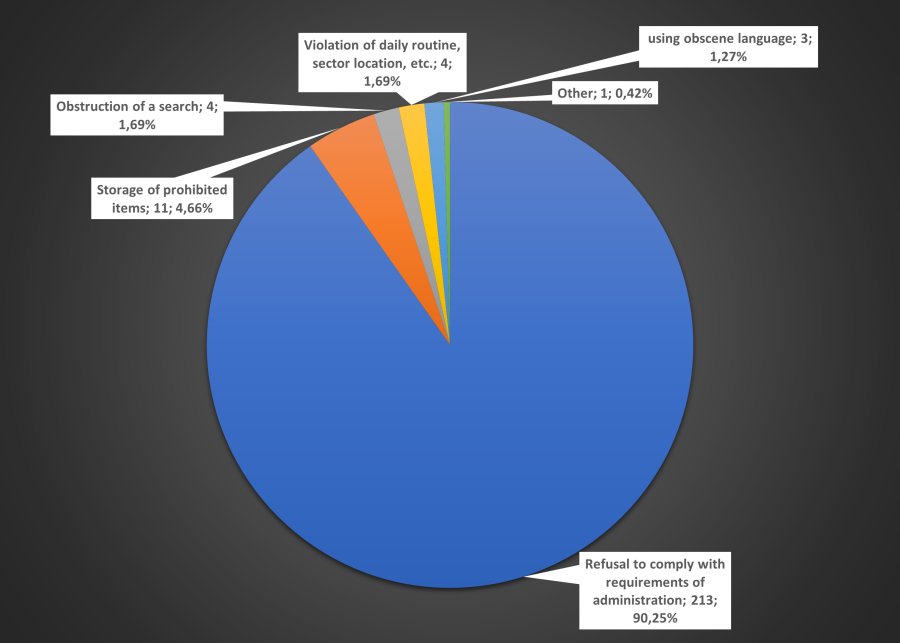 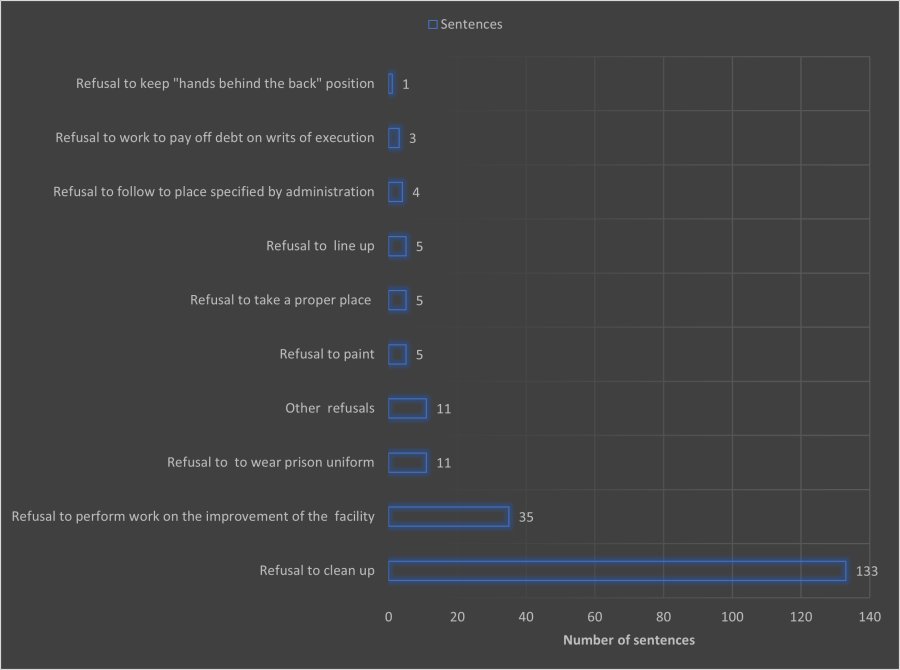 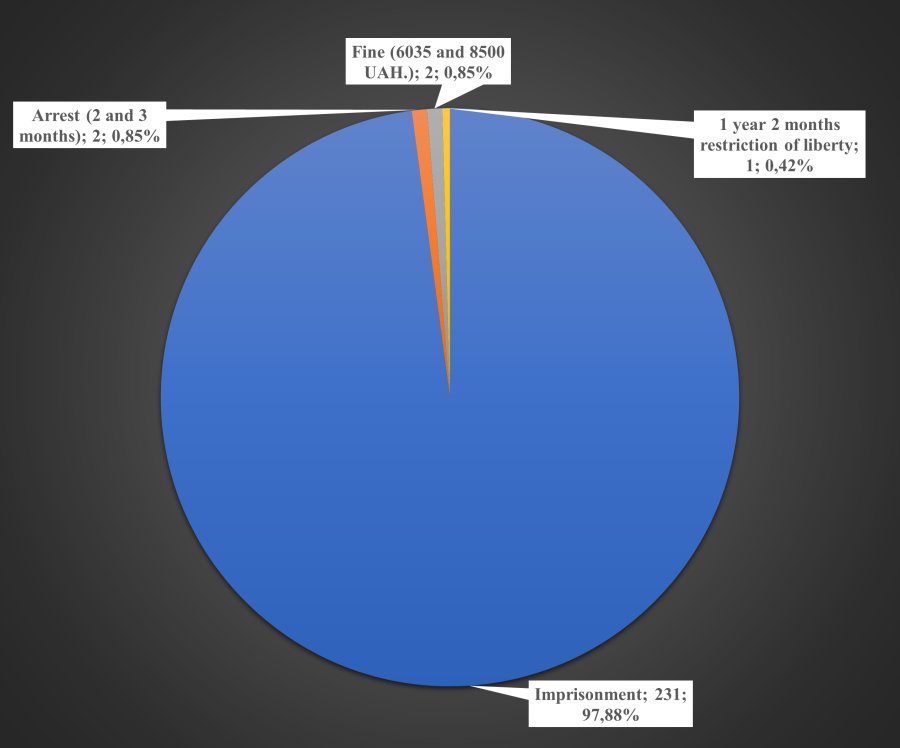 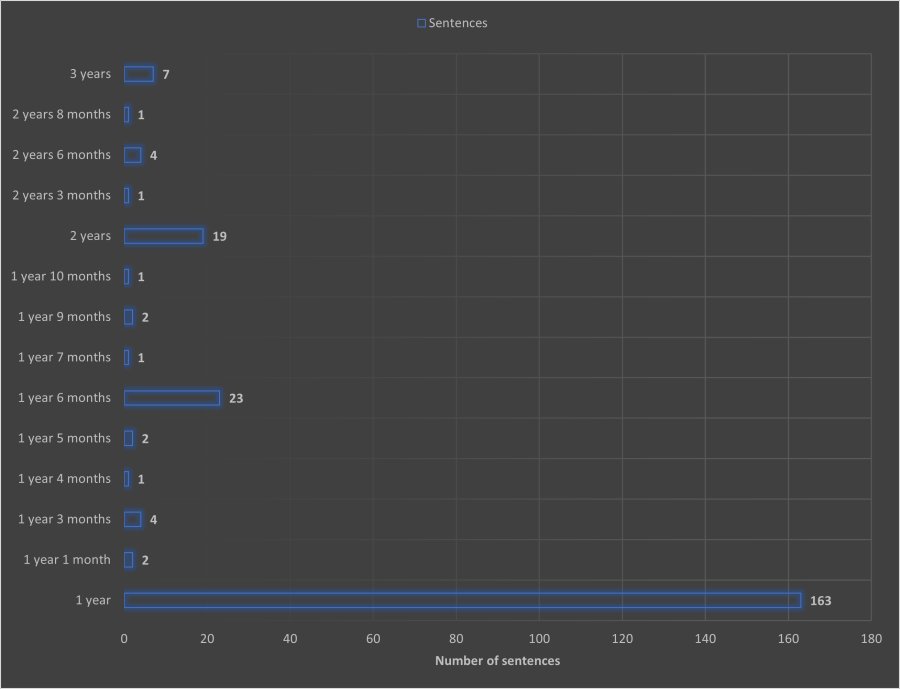 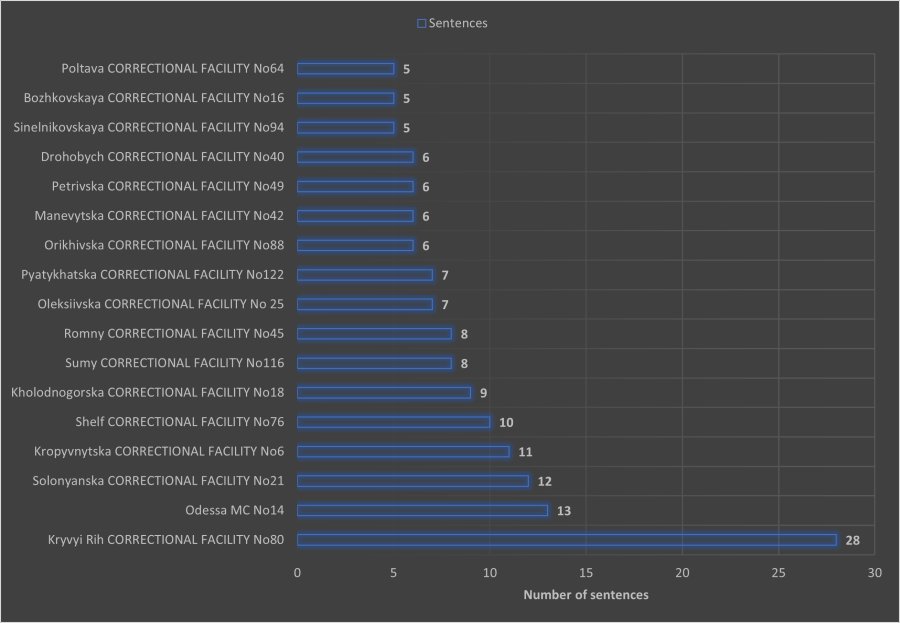 Criminal liability can be brought only for actions that by their nature and public danger can be considered a crime, and if the convicted person was fined for actions that by their nature are disciplinary misdemeanors, then regardless of the number of such actions, they remain disciplinary and not criminal misdemeanors. In a democratic legal state, there should not be a situation where the sum of several disciplinary penalties (for example, charges for profanity + for refusing to clean the camera + for refusing to clean the territory) turns into a criminal offense, all the more so, with established practice, when in most cases the prison administrations arbitrarily impose disciplinary sanctions on convicts, deliberately and in advance preparing the ground for initiating proceedings under Article 391 with tacit consent and the lack of evaluation of such behavior of the administration by the courts when considering criminal cases for Article 391, where such disciplinary sanctions form the basis of the accusation.

Article 391 of the Criminal Code of Ukraine, both by its essence and by the practice of its application, does not correspond to the basic democratic principles and the principles of criminal law and is used in most cases as a tool of pressure and reprisals against disobedient prisoners. In this form and with this practice of its application, Article 391 of the Criminal Code has no right to exist and should be abolished.