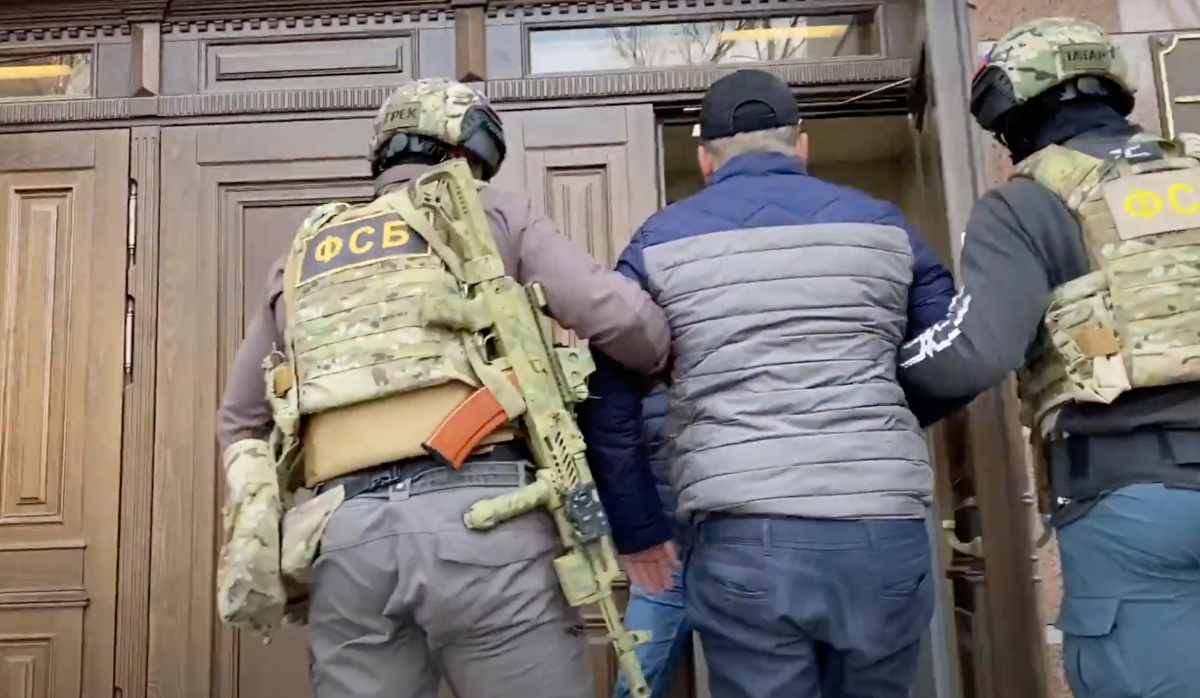 A Russian-controlled ‘court’ in occupied Simferopol has sentenced 31-year-old Ruslan Abdurakhmanov to five years in a harsh regime prison colony on charges of staggering cynicism.  The young Crimean Tatar is one of several Ukrainian citizens, living in mainland Ukraine, whom the Russian aggressor state has first abducted, and then charged with involvement while in mainland Ukraine in a peaceful organization which is perfectly legal in Ukraine.

It is typical that there is even some doubt as to whether the conviction on 2 September was of Ruslan Abdurakhmanov, or, as the occupation ‘court’ schedule suggests, of Aider Umerov.  Although the Russian occupation regime began imprisoning Crimean Tatars on charges of involvement in the Noman Çelebicihan Battalion back in 2018, these prosecutions have become yet another conveyor belt of repression in occupied Crimea, with the main aim for Russia being in the propaganda narrative provided about such cases.  Although the FSB now appear to be using the charges to justify their abduction, torture and subsequent ‘arrests’ of other Ukrainian citizens, it has long seemed as though being a Crimean Tatar was sufficient for the FSB, with no evidence of actual involvement in the Battalion required.

The sentence was passed on 2 September by the occupation Kievsky District Court in Simferopol, under ‘judge’ Mikhail Bielousov.  The latter has been accused by Ukraine’s prosecutor of war crimes over his role in the imprisonment of Andriy Kolomiyets, a young Ukrainian Maidan activist sentenced to 10 years on no less surreal charges.

As reported earlier, Russia is using the Noman Çelebicihan Battalion’s title to spread disinformation about an unarmed civic organization which is legal in Ukraine.  The Battalion was founded by Crimean Tatar activist and businessman Lenur Islyamov on 1 January 2016, with the first members people who had taken part in the civic blockade of occupied Crimea.  This blockade was initiated by Crimean Tatar leaders Mustafa Dzhemilev and Refat Chubarov, together with Islyamov, on 20 September 2015.  The blockade demanded an end to all trade, and supplies of electricity to Crimea while it remained under Russian occupation.  There were initially very specific human rights demands, including an end to the political repression and restrictions on the media which Russia had brought to Crimea, and much more. Such a total blockade should have been imposed back in April 2014 when Ukraine rightly stopped providing water to occupied Crimea.

While the Battalion and its members undoubtedly saw their ultimate objective as the end to Russia’s illegal occupation of Crimea, this was not an armed formation. Battalion members merely promoted the goods and energy blockade and provided backup for Ukrainian border guards in areas near the administrative border with occupied Crimea. The Battalion has not really existed for such time, but this is not stopping Russia from using charges of involvement in it to fabricate politically motivated ‘trials’.

Since the first arrests in early 2018, people have been charged under Article 208 § 2 of Russia’s criminal code (“taking part in the activities of an illegal armed formation, acting on the territory of a foreign state for purposes which are against the interests of the Russian Federation”).  Although claims are generally made that those arrested were trained in using weapons, these are only ever backed by anonymous ‘witnesses’ who may well have never known the person on trial.  There was never any recognizable crime, with Russia simply treating the objective to end Russia’s illegal occupation of Crimea as “activities against the interests of the Russian Federation.”

In June this year, Russia’s Supreme Court declared the Noman Çelebicihan Battalion  to be a ‘terrorist’ organization and banned it on the territory of Russia or occupied Crimea.  Although the number of men arrested since the beginning of Russia’s full-scale invention has risen dramatically, it is telling that neither the charge, nor the sentences have risen significantly. That could, however, change at any time, with Russia using an equally flawed Supreme Court ruling about Hizb ut-Tahrir to sentence civic journalists and activists to up to 20 years without any crime.  At present, the ‘terrorism’ label which did, in fact, post-date the actual existence and activities of the Battalion, is largely used for propaganda purposes by the Russian state media.   The RIA Novosti report on Abdurakhmanov’s ‘trial’ uses the term ‘terrorist’, however describes alleged activities (the involvement in the goods blockade and supposed serving as personal guard to Lenur Islyamov) that have absolutely nothing to do with terrorism.

The report claims also that Abdurakhmanov was detained “while trying to cross the Russian border”.  There is nothing at all illegal about attempting to cross from mainland Ukraine through the administrative border into Crimea, and there were very clearly no grounds for arresting Abdurakhmanov in April this year.  On several occasions since the full-scale invasion, Russia has first abducted men from their homes in the Kherson oblast and taken them to occupied Crimea.  This was the case with 25-year-old Crimean Tatar Ruslan Osmanov.  Such evident lawlessness did not stop an occupation court from sentencing him to six years’ imprisonment on 19 August this year.

Six Crimean Tatars are currently serving sentences of up to 10 years’ imprisonment, without any crime, merely on a charge of involvement in the Noman Çelebicihan Battalion in mainland Ukraine.  These are: Edem Kadyrov; Fevzi Sahandzhy; Dilyaver Gafarov; Nariman Memedinov; Aidyn Mamutov and Medzhit Ablyamitov.

The list below includes those reported here earlier, as well as those reported by the Crimean Tatar Resource Centre to have been seized recently in occupied parts of the Kherson oblast.

27 March  Rustem Gugurik, a taxi driver from Novooleksiivka (Kherson oblast), was arrested by the FSB on 27 March, when, together with his wife, Viktoria and their 6-year-old daughter, he was at the Chonhar checkpoint planning to enter occupied Crimea.  Instead, the Russian FSB ‘border-guards’ seized Gugurik and held his wife and daughter for around 56 hours, without any food, only water.  50-year-old Rustem Gugurik denies any involvement in the Battalion, but did take part in the Crimean Blockade.  He stated back in 2016 that he was sure that his involvement in the blockade was the reason why he and his brother, Bekir, were banned from entering occupied Crimea from 2016 to 1 January 2021.

9 April  Arsen Ibraimov , a resident of Kherson, was detained at Kalanchak by the Russian FSB, who claimed, as though this were justification, that he “took an active part in the goods and energy blockade of Crimea, and also in anti-Russian protests in the area of the ‘Chonhar’ checkpoint.”

14 April  Rustem Osmanov was seized by Russians who burst into his home in Kalanchak, Kherson oblast.

20 May (or, according to the report on 2 September, April)  Ruslan Abdurakhmanov, from the village of Azovske

25 May  Aider Umerov, from the village of Partisany in the Henichesk raion