Ukraine’s Miners: Put at Risk and ExploitedAnother methane explosion at a Luhansk region mineNo End to the Deaths in Ukraine’s Mining DisastersUnion blames Mine Owners for Fatal BlastRefined torment of minersReformers of the Mining Industry – Miners’ Opinion not needed?On illegal mines in the Donbass region and where the Police and other authorities are not lookingWere miners left to die after the explosion at the “Zakhidna” Mine?Ukraine’s Mines remain deadlyYet more miners die in Ukraine’s minesBlack Gold mixed with BloodDonbas Miners: Neither decent working conditions, nor a normal burialMore victims of Donbas’ illegal minesOrganizer of illegal mine imprisonedPit No. 8: Illegal Mines in UkraineMain hero of illegal mining film savagely beatenMore victims of police protection of illegal miningNo money for medics in occupied Crimea & Russia, while 15 billion spent to rubberstamp Putin’s life presidencyAccountability for international crimes committed in Ukraine between 2014–2018European Court of Human Rights demands answers from Russia over downing of MH17 over Ukraine
• Topics / Social and economic rights

Miner who complained of inhuman conditions after mine disaster “transferred” 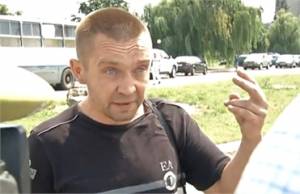 Following considerable publicity over reports that Ihor Smetanin, the miner who spoke out about inhuman conditions at the Sukhodilska-Eastern Mine had been fired, the Head of the Luhansk Regional Administration has stated that Mr Snetabub has been moved to another mine.

As reported, Ihor Smetanin spoke to journalists after the latest disaster on 29 July at the Sukhodilska-Eastern Mine, owned by billionaire National Deputy from the Party of the Regions, Rinat Akhmetov.

Ihor spoke in the video, which was posted on Youtube, about helping to bring his dead colleagues up to the surface and how he had cried all night.

He said that there may have been as much as 5 percent methane in the mine, with the nom being around half a percent.  Most harrowingly, he said that if there’s a leak, they just air the place a bit and continue working.  If they don’t, they can lose their job.

They earn a pittance and work in shocking conditions.  Men are expendable ….

All this was reiterated by the Head of the Confederation of Free Mining Unions, Mykola Koziuberda.  He told the Internet publication OstroV that the blast at the Sukhodilska-Eastern Mine was the result of the owner’s “greed” and the intense pace with which the coal faces are being worked

At a press conference on 11 August, the Head of the Solidarity Labour Movement, Konstantin Ilchenko said that Ihor Smetanin was in hiding.

“I spoke with him. He agreed to take part on 11 August in our press conference. But after our conversation police arrived to speak with him – the bandits had a conversation with him and promised that he’d be found in a cell and nobody would lift a finger. And the man got frightened. This is how people live in the Luhansk region”.

Following this publicity Prime Minister Azarov stated that if information was received that Smetanin had really been threatened, the Governor and director of the mine would lose their jobs.

It was reported the next day that the Head of the Luhansk Regional Administration, Vladimir Pristiuk stated to the press that t he had personally checked what had happened to Ihor Smetanin after the miner’s interview was widely reported in the media, followed by reports that he had lost his job.  Mr Pristiuk said that Ihor Smetanin had been moved to another mine – Samsonovskaya-Western.  He said that the document about his leaving the Sukhodilska-Eastern Mine stated that he was doing this of his own free will, Pristiuk had doubted that this had been voluntary.  He apparently rang the Director General of Krasnodonugol and demanded that Ihor Smetanin be reinstated.