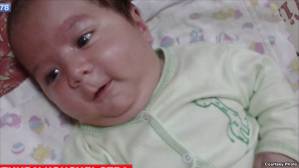 A young Tajik couple is looking for answers after their infant son died in police custody while Russian authorities were investigating his mother's legal status.

And Zarina Yunusova and Rustam Nazarov have a number of questions.

How did 5-month-old Umarali Nazarov die in a St. Petersburg hospital less than 24 hours after being separated from his mother, Yunusova?

How can they be sure the dead infant they were briefly shown is really their son?

Why has it taken more than two weeks to find out what is going on?

When will they be able to take the body home?

The lives of 21-year-old Yunusova and her partner, Nazarov, 25, have been turned upside down since the events of October 13, and they need to know what happened.

What they do know is that their son was healthy when police burst into the family's rented St. Petersburg apartment that day. Nazarov was away at work at the time, but Yunusova and Umarali were rushed away to a police station.

"They didn't allow me to dress the baby warmly or even to put a hat on his head, " Yunusova recalled to Russian media this week.

At the police station, a crying Umarali was taken from his mother's arms. It would be the last time Yunusova would see her child alive.

After an investigation, Yunusova was found guilty of violating Russian migration laws, and ordered to leave the country by October 28.

Following the court hearing, which lasted well into the evening, the distraught family asked police to return their child. However, they were told the baby had fallen ill and was taken to a hospital, and that the parents would not be able to visit him until the next day.

The following morning, the parents were told that their son had died and his body taken to the morgue. It was four days before the parents would be allowed to see the body.

"I'm not even sure if it's my son, " Nazarov told RFE/RL's Tajik Service and Current Time television. "I couldn't recognize the body because the face is bruised and black around the eyes, nose, and lips."

The only indication that it could be Umarali, the father adds, was a mark from a recent inoculation.

Until they get closure, the family can only speculate about what happened.

"Maybe my son died of hunger or cried himself to death as he was being kept there for several hours, " Nazarov suggests, adding that he doesn't rule out that the officers dropped the baby and fatally injured him.

Police in St. Petersburg are in the best position to know what happened, but have declined to comment until their investigation is complete. The autopsy results are expected by November 14.

Umarali's parents, their supporters, and even high officials in Tajikistan and Russia are calling for quicker action, however.

On October 27, dozens of Tajiks rallied in front of the Russian Consulate in New York, chanting "Justice for Umar" and "Tajik lives matter."

The protesters held up signs declaring that #WeAreUmar and that "We demand justice."

In St. Petersburg, dozens gathered outside a city police station on October 22 to protest police treatment of the family.

As of October 30, more than 40, 000 people had signed a petition started by St. Petersburg activist Galina Artyomenko on Change.org demanding answers and justice for the migrant child's death.

Amid the outcry, Tajik President Emomali Rahmon personally requested that the Russian government investigate the circumstances of Umarali's death. And during a meeting with Russian Prime Minister Dmitry Medvedev on October 30, he received assurances that Russian investigators would get to the bottom of the matter.

The case has galvanized the Tajik community at home and abroad.

More than a million Tajiks travel to Russia every year to work as migrants. Document checks and detentions are common, as is occasional violence, and the discrimination they face there is well-documented.

Nazarov already finds himself defending his family amid suggestions that they were somehow to blame for Umarali's death.

On October 21, according to Novaya Gazeta, police began investigating the family for criminal negligence in the upbringing of their child.

Police officials have claimed that there were "signs of crime" in the actions of Umarali's parents, according to the daily. Local authorities have alleged that the family's apartment has no electricity or running water, although Novaya Gazeta reported that its correspondents determined that there was electricity and water when they visited, and that the apartment was clean, warm, and "entirely inhabitable."

"I reject claims that we allegedly live in a cellar and have cockroaches at home, " Nazarov says. "We keep our home very clean."

Boris Vishnevsky, a St Petersburg lawmaker from the liberal Yabloko party, described the incident as "murder" and tweeted a photo of himself paying his respects by placing flowers on the windows of the Tajik Consulate.

Vishnevsky's approach, however, has not been adopted by fellow local lawmakers. Most have avoided comment on the issue, and calls for the city police chief to be summoned for questioning have been ignored.

For Nazarov's family, it's the second death of a child in St. Petersburg: Umarali's 12-year-old brother was stabbed to death in 2004.