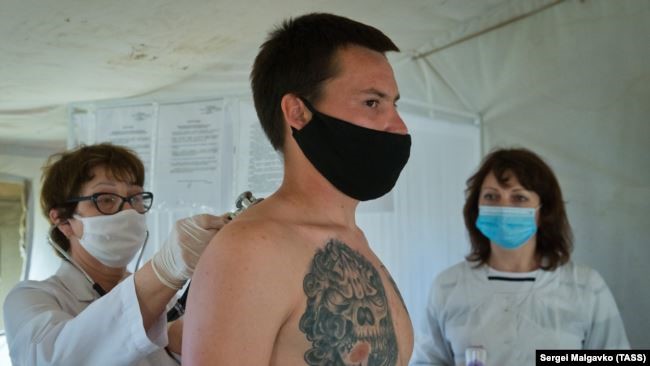 Almost 100 young men have been sentenced by  Russian-controlled courts in Crimea for refusing to do military service in the Russian army. How many of them refused out of opposition to Russia’s occupation of Crimea cannot be known since any admission of this in court could lead to serious terms of imprisonment for supposedly ‘encroaching upon Russia’s territorial integrity’,  All of this is in flagrant violation of international law, as is Russia’s propaganda of its armed forces and of war, aimed at encouraging Crimeans to volunteer.

The Crimean Human Rights Group has been monitoring the situation since annexation, and providing information to international bodies, in particular, the International Criminal Court.  Russia first imposed conscription on the occupied territory in the Spring of 2015, and since then more than 22 thousand young Crimeans have been conscripted into the occupier’s army.   The number has been increasing each year, with 3,300 likely to be called up in Spring and Autumn this year.  Skrypnyk notes that Russia’s promise back in 2014 that Crimeans would not be forced to do military service outside Crimea has long been broken, with many young men sent to parts of Russia since 2017.

The situation in 2020 is particularly shocking because of the pandemic.  Instead of cancelling the call-up, Russia simply postponed its commencement from early March to 20 May.

The Crimean Human Rights Group is aware of 105 criminal prosecutions, with 96 of them already having resulted in convictions.  In general, the ‘courts’ impose fines, however these do not remove the requirement to do military service, meaning that if a person still refuses, harsher penalties are inevitable.

Skrypnyk points out that there can be various grounds why a person would want to avoid military service, however certain reasons cannot be revealed in court.  Following all international bodies and democratic states in calling Russia an occupying state and Crimea Ukrainian can lead to and has already resulted in prison sentences  The most likely charge would be under Article 280.1 of Russia’s criminal code, which came into force shortly after Russia’s invasion and annexation of Crimea.  This norm punishes for something called ‘making public calls to action aimed at violating Russia’s territorial integrity’, with Russia treating illegally annexed Crimea as its territory.

Skrypnyk was a university lecturer in Yalta before annexation, and says that she knows of young people for whom the prospect of having to do Russian military service was a key factor in them leaving Crimea.  For very many Ukrainians of conscription age, it makes it impossible to visit family in Crimea since their Crimean registration could be used to claim that they should do military service, or even prosecute them for supposedly evading it.

All of this is seriously illegal since the fact that a person has Ukrainian citizenship, whether living in Crimea or in mainland Ukraine, means that they are obliged only to serve in the Ukrainian Armed Forces.

Skrypnyk is convinced that much more needs to be done than merely documenting these latest examples of Russia’s breaches of international law. Sanctions need to be extended with these specifically over the illegal imposition of conscription.  These should be tough sanctions touching on both financial issues, and programs of cooperation with Russia on military and scientific matters.

There are real grounds for this as the situation is entirely unequivocal. Russia’s constant attempts to deny that it is an occupying state are rejected by the United Nations, by democratic countries and by the International Criminal Court’s Chief Prosecutor who has confirmed that Russia’s ongoing occupation of the peninsula constitutes an international armed conflict, one falling within its jurisdiction.  Article 51 of the (Fourth) Geneva Convention relative to the Protection of Civilian Persons in Time of War, which Russia is a partner to, unequivocally states that: “The Occupying Power may not compel protected persons to serve in its armed or auxiliary forces. No pressure or propaganda which aims at securing voluntary enlistment is permitted”.

On 21 May, James Gilmore, US Ambassador to Ukraine, issued a hard-hitting statement spelling out the illegality of Russia’s conscription in Crimea.

Calls for Russia to stop behaving lawlessly are, unfortunately, treated as so many words, unless backed by sanctions or other measures that hurt.  With Russia actively  trying to destroy Ukrainian identity and indoctrinate children into believing Russia’s lies about Crimea having always been a part of Russia and into glorifying war, the situation could not be more urgent.