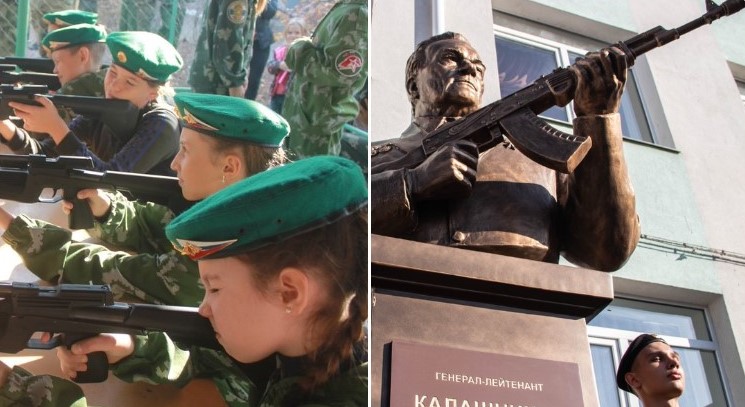 Russia is glorifying war and teaching children how to kill in occupied Crimea, and no lessons at all have been drawn from the mass killing in Kerch on 17 October 2018, in which 20 students and teachers were gunned down.  Quite the contrary, with children at another Crimean school now having a statue brandishing a machine gun greet them as they arrive for lessons.

School No. 26 in Simferopol has been named after Mikhail Kalashnikov, the Russian military engineer and inventor of a number of weapons, since 2016. It was only in November 2019, however, to mark the centenary of Kalashnikov’s birth, that a statue of him holding the machine gun which he invented was erected.

This is a shocking image, but essentially typical of the militarization that Russia has brought to occupied Crimea.  In Simferopol School No. 18, ‘military-sport games’ were organized to mark the same Kalashnikov anniversary.  This was at least the second time in 2019 that such games were held at the school, with children dressed in uniforms clearly imitating those of the Russian armed forces.  Children and teenagers demonstrated their skills in shooting, in assembling and dismantling Kalashnikov rifles, as well as loading them.

Judging by the ‘military-patriotic’ camps that Russia also stages, the activities are also likely to include propaganda about ‘Russian history’, with that doubtless including Russia’s deeply misleading narrative used to justify annexation of Crimea.

The same No. 18 school also shared photos of its ‘Youth Army’ [Yunarmia] unit travelling to Perevalne “to meet with old friends and play laser battles”.  Russia’s defence ministry is trying to get one million children and young people into this ‘army’ and it is likely that very many schools in occupied Crimea have their own units. In later October, it was reported that  Russia had recruited 1500 children and young people from Sevastopol into Yunarmia.

There have been reports indicating a degree of direct coercion, and there must inevitably be considerable pressure both on schools and on the children and their parents for them to take part.

This ‘youth army’ is the militaristic wing of the Russian Movement of School Students’, created by presidential decree on October 2015 and aimed at instilling “the system of values inherent to Russian society”.  The Youth Army is supposed to be “responsible for issues linked with the military-patriotic upbringing of young people”.

While formally a part of the Movement of Schoolchildren, Yunarmia is clearly run by the Russian Defence Ministry.  In his analysis of the new formation, Roman Popkov wrote that Russian generals openly admitted that they wanted to teach kids to fight from an early age. Sergey Shoygu, Putin’s Defence Minister has spoken of a  major goal of the Yunarmia movement being to popularize military ideology and foster a special bond “between young Russians and the army”.

Russia is in grave breach of international law, both through its use of conscription in occupied Crimea, and through its open efforts to glorify military service and war among young Crimeans.

The activities are, in principle, fun for many young kids and Russia is spending large amounts of money on them, at a time when other activities get little or no funding.  The militarization is, however, for a purpose and the danger inherent in the propaganda pushed, together with the ‘military-patriotic activities’ cannot be overstated.

The fact that the first horrific massacre in a college took place under Russian occupation does not, in principle, imply any cause and effect relations, but questions should have been raised and they were not.

On 17 October 2018, Vladislav Roslyakov, an 18-year-old student of the Kerch Polytechnic College set off an explosive device and shot dead 15 other students and 5 lecturers before, seemingly, killing himself. Nothing like this has ever happened in Ukraine.

We can only surmise whether the mounting militarization under Russian occupation had played a role, however Russian President Vladimir Putin’s attempts to blame ‘globalization’ seemed cynically off track, especially since Putin then proposed still further state intervention to provide the allegedly missing “necessary, interesting and useful content for young people.

What was evident from the outset was that the Russian authorities did not appear interested in a proper investigation.  The Russian and pro-Russian Crimean media were more than willing to treat the tragedy as terrorism while they could quote a Russian-installed top Crimean official as claiming that Ukraine was behind the attack and that the culprit allegedly “looked like a Tatar”.  It soon became clear that the young man was a Slav, and one, reportedly, with pro-Putin sentiments, and the Russian Investigative Committee changed the qualification of the crime from an act of terrorism to multiple homicide.   The Russian-controlled media, on the other hand, went on to use the tragedy to stir up enmity towards the Jehovah’s Witnesses whom Russia is persecuting (because of an alleged and tenuous link between Roslyakov’s mother and the Jehovah’s Witnesses).

Perhaps a comprehensive investigation was carried out into how the young man had come to have such weapons, but nothing has been made public.  There is nothing to suggest that attempts were made to understand why and to consider whether the ferocious level of militarization had played a role.