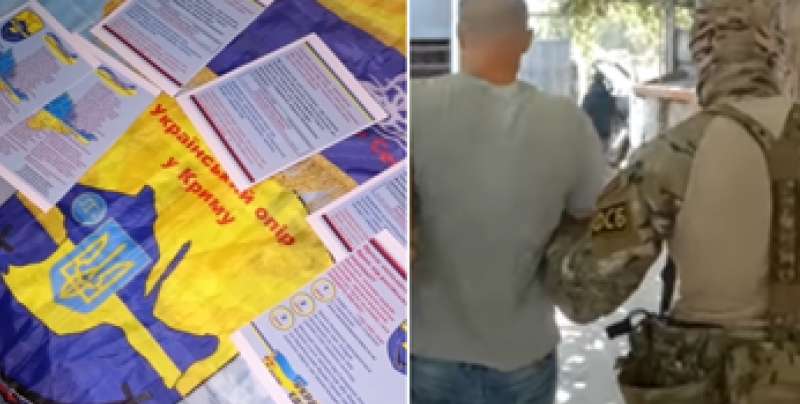 One of two young men seized by the Russian FSB in occupied Crimea between 19 and 22 September has been informally identified as 22-year-old Oleksandr Dolzhenkov from Odesa.  There is as yet no information about the 28-year-old from Yevpatoria whose arrest was announced at the same time.  The FSB report mentioned only the men’s names, and that the 22-year-old had been arrested  for circulating pro-Ukrainian leaflets, with the FSB claiming this to be ‘calls to action aimed at violating the territorial integrity of the Russian Federation.’  The 28-year-old from Yevpatoria is also claimed to have threatened to blow up administrative buildings on social media. 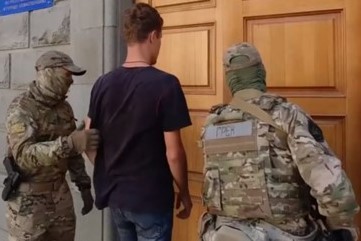 Krym.Realii reports that Dolzhenkov is a graduate from the Geology Faculty of Odesa National University.  He also runs a YouTube channel under his name Александр Долженков with video blogs on travels around Ukraine and some other European countries. There is no official confirmation that Dolzhenkov is the person arrested, and Krym.Reallii is waiting to hear from the young man’s family.

Ukraine’s Prosecutor for Crimea and Sevastopol reported on 25 September that it has initiated criminal proceedings against the FSB over their illegal detention of the young man.  Although they do not name him, he is identified as being from the Odesa oblast, and is said to have been seized in Yevpatoria.

The video of the 22-year-old’s arrest focuses solely on what look like innocuous pro-Ukrainian leaflets, entitled ‘Resistance in Crimea’.  As is often the case, the FSB made public information three days after the young man’s arrest on 19 September.  Had there been any calls in the leaflets to violent resistance, etc., it is  most unlikely that he would be only facing a charge under Article 280.1 of Russia’s criminal code (the so-called ‘calls to action aimed at violating Russia’s territorial integrity.’).  280.1 appeared in Russian legislation shortly after the invasion and annexation of Crimea and has, as feared, been used to persecute Ukrainians and some Russian citizens for saying, in full agreement with the international community, that Crimea is Ukrainian territory which Russia is illegally occupying.

The FSB assert that the younger man, who is probably Dolzhenkov, came to Crimea “to look for accomplices in order to destabilize the socio-political situation in the region. In September 2020, the Ukrainian circulated leaflets containing  calls to action aimed at violating the territorial integrity of the Russian Federation in Crimean citizens. After this, on 19 September, he was detained by FSB officers.

At the place he was staying leaflets of an extremist content were discovered and removed, together with the means of communication with the help of which unlawful actions were carried out.”  The young man has been remanded in custody.

On 21 September, the FSB also arrested somebody whom they identify as a Russian citizen “involved in the public justification and propaganda of terrorism and extremism.”  Everything, from the shouts as three FSB men stormed in was designed to create the impression that the 28-year-old, initially seen on the video only in shorts / underwear, is a dangerous criminal. It is asserted that “the Yevpatoria resident, using his page in a social network, sharing and supporting the activities of Ukrainian national groups, posted material with threats to carry out explosions of administrative buildings in Crimea.  The individual is also involved in circulating agitation leaflets of an extremist nature.”

The FSB assert that they found and removed components of explosive devices , items that look like firearms and bullets and extremist leaflets.  There was nothing to indicate that there were independent witnesses present when the armed and masked FSB men allegedly made their ‘find’.

Russia has made it all but impossible for Crimeans to not take Russian citizenship, and the 28-year-old is, doubtless, a Ukrainian also. He too has been remanded in custody and is facing three charges under Article 205.2 § 1; Article 280 § 1 and 280.1  - ‘public calls to carry out terrorist activities; public calls to extremist activity and the same calls to action aimed at violating Russia’s territorial integrity.’