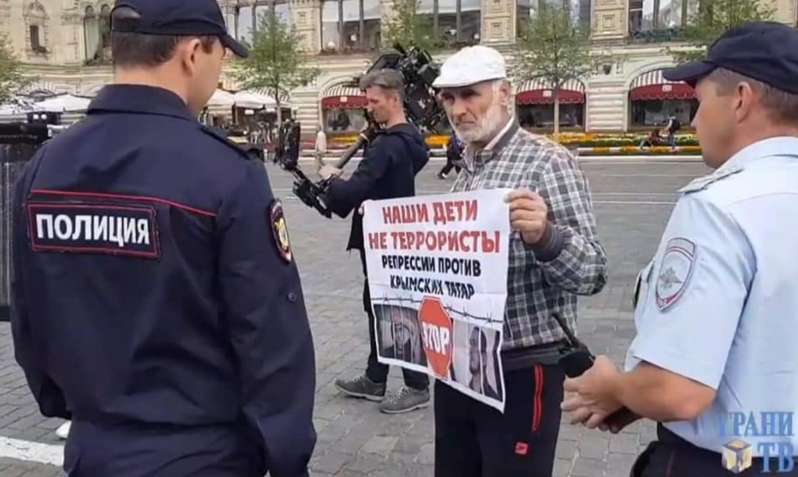 It may be unclear who ordered the recent surge in ‘police raids, visitations and ‘prophylactic chats’ in Russian-occupied Crimea, but there is certainly no doubt as to who is being targeted and why.  This is a deliberate offensive against Crimean Tatars and ethnic Ukrainians married to Crimean Tatars with a particular focus on Crimean Tatar activists who have taken part in peaceful protests in defence of political prisoners.  The scale of the visitations suggests that this is not just some local police department trying to improve its statistics on ‘countering extremism’ before the end of the year, but aimed at maximum intimidation.  Many imprisoned Crimean Tatar civic journalists and activists were, after all, first subjected to varying forms of administrative prosecution and harassment before the FSB decided to ensure their silence through arrests and ‘terrorism’ charges.

At least three ethnic Ukrainian wives of Crimean political prisoners have faced police visits and attempts to get them to write ‘explanations’ about their religious beliefs, etc. As reported, the first such visitation, to Anna Bogacheva on 28 November 2020 only strengthened the strong suspicion that Bogacheva’s prisoner of conscience husband, Vadim Siruk, had been targeted by the Russian occupation regime as an ethnic Ukrainian convert to Islam.  At least two other women – the wives of Arsen Dzhepparov and Inver Bekirov – have also been harassed and told they must proved ‘explanations’.  The situation seems particularly grotesque as the Russian FSB have repeatedly tried to present the Crimean Tatar Muslim prisoners of conscience as racially and religiously intolerant fanatics, whereas the only racism and religious intolerance is demonstrated by representatives of the occupation regime.

A number of other visits have been made to Crimean Tatars, most of them activists, involved in peaceful actions in defence of political prisoners. This is not, in principle, new. The Russian occupation prosecutor and police began issuing ‘warnings of the inadmissibility of extremist activities’ within a couple of months of Russia’s invasion.  Such ‘warnings’ are regularly issued to prominant Crimean Tatar figures and activists from Crimean Solidarity, including before the anniversary of the Deportation of the Crimean Tatar people on 18 May each day.  Russia banned remembrance activities  on the 70th anniversary of the Deportation in 2014, and has since been implying that honouring the victims of that act of genocide constitutes ‘extremist activities’.

The visitations now taking place seem rather different.  In many cases, entirely implausible grounds have been given, with the officers scarcely trying to come up with a coherent reason.  The officers who, on 9 December, turned up at the home of Shurki Seitumerov, well-known historian and the father of two political prisoners Osman and Seitumer Seitumerov, claimed to be “looking for burglars”.  The story was absurd:  a person from Simferopol had purportedly been robbed in Salachik (Bakhchysarai region) and officers from Simferopol, it was claimed, had arrived “to look into the matter”.  For this reason, they suggested, they had appeared at the home of an elderly man to ask what he had been doing at 2-3 a.m. and whether he had seen anything suspicious.

The officers who appeared at the home of activist Zeynur Asanov claimed that they were looking for a car with a number plate similar to that on Asanov’s car.  After Asanov refused to fill out and sign a protocol, the officers wrote out all the information on his passport, as well as his telephone number and then left.

The justification for harassing the family of political prisoner Seiran Saliyev and his human rights activist wife, Mumine Saliyeva, was even more idiotic.  Mumine Saliyeva commented later that although the motives for turning up at the homes of wives and families of political prisoners, of civic activists, are not entirely clear, this is a kind of pressure on activists in Crimea.  It is clear from the numerous reports of such visits that the police have been issued with a list of people to ‘visit’.

“I believe that such activities are the latest systematic reminder to all of us that any civic activism in Crimea will remain under the scrutiny of the enforcement officers”, Saliyeva says.

A number of those who have faced visits took part in peaceful protests in Moscow in solidarity with Crimean Tatar political prisoners.  Like in Soviet times, those who took part were detained and prosecuted.

Shurki Seitumerov was one of several elderly veterans of the Crimean Tatar national movement who, in July this year, demanded an explanation and apology from Sergei Aksyonov, the Russian-installed Crimean leader, after the latter thanked FSB and other Russian enforcement officers with machine guns who had burst into homes where young children were sleeping  and planted ‘prohibited literature’ in order to imprison the children’s fathers for a decade or more.  Aksyonov had claimed that these arrests, including of Aleksander Sizikov, who is totally blind and disabled, had been impeccable “work in fighting extremism and terrorism”, and that such “individuals” “should and will be imprisoned, without any variants”.  Aksyonov proved too cowardly to come out and speak to the men.

Shurki Seitumerov explained at the time: “I consider it my duty to come here today and address the official, sitting in his comfortable chair and seeing fit to hurl abuse at my people, our sons, grandsons, to desecrate our memory, including that of my grandfather who was accused in just the same way in 1938 of terrorism and executed after 2 months.

Osman and Seitumer Seitumerov, as well as their uncle, Rustem Seitmemetov are facing huge sentences without any crime with Russia systematically using harassment, intimidation or arrests and long terms of imprisonment to silence those activists who speak out against such repression.