Josef Zisels condemns attempts to manufacture Ukrainian-Jewish clashes in Lviv on 22 JunePolice turn a blind eye to the Party of the Regions politician who used a pistol on 9 May in LvivCommittee in Defence of Modern Political Prisoners formed in LvivOver 5,000 demonstrate in Lviv against arrest of Svoboda Party membersLviv: Brush up your Russian and brush away stereotypes.Lviv provocation on 9 May: No joking matterTortured for damaging a bust of StalinYoung activists charged with damaging statue to Stalin released pending trialStudent charged with damaging statue to Stalin released pending trialLeader of nationalist organization gets four months for a pistolFile on those accusing of damaging Stalin monument passed to the courtStudent will remain in custody over beheaded bust of StalinMore on the “Zaporizhya Terrorists”Police detain two more members of civic organization TryzubSearch of Poet’s Home – No need for fear, colleagues and human rights activists adviseDestruction of Stalin monument – pretext for repression?KHPG: On the arrest of a number of members of VO TryzubThe Korniychuk Case – evidence of the start of repression in Ukraine?On the detention in custody of lawyer Yevhen KorniychukLutsenko to remain behind bars
• Topics / Politics and human rights

VAAD, the Association of Jewish Organizations and Communities of Ukraine has issued a statement in connection with the measures planned in Lviv on 22 June by Odessa civic organizations who call themselves “Jews against anti-Semitism” and “Jews against Gurvits”.  The following is a translation of the whole statement.

According to information circulated by the media, Odessa civic organizations who call themselves “Jews against anti-Semitism” and “Jews against Gurvits” are planning to hold an “anti-fascist rally” in Lviv on 22 June. According to the information we have available*, these organizations do not represent either the Jewish community of Ukraine or the Jewish community of Odessa, and have no moral right to speak on behalf of all Jews of Ukraine. Their provocative activities, aimed at destabilizing inter-ethnic relations in the country, have previously been condemned by Jewish civic organizations in Odessa, rabbis, associations of former prisoners of the ghettos and concentration camps, by some of the Righteous among Nations and by the Israeli Embassy in Ukraine. Furthermore, according to available information, radical pro-Russian groups are behind these ephemeral structures, and the leadership of both Committees has been seen on a number of occasions to be involved in overt anti-Semitic propaganda.

The Association of Jewish Organizations and Communities of Ukraine which includes 266 organizations from 90 cities strongly condemn this attempt to use tragic dates of mourning and remembrance for political ends. VAAD Ukraine stresses that provocation on this day is unacceptable and calls on all constructive State, municipal and civic forces to make all efforts to minimize possible negative consequences from the activities of provocateurs.

*  VAAD Ukraine provides an article by Viacheslav Lichachov entitled: “Jews against Anti-Semitism”: Who is behind the Provocateurs?   The photo is from the article and states that in Odessa the Righteous among Nations drive members of the “Jews against anti-Semitism” Committee from their events, calling them “provocateurs and Nazis”.  Photographer: Viktor Pavlov (http://cdyu.livejournal.com/305534.html), 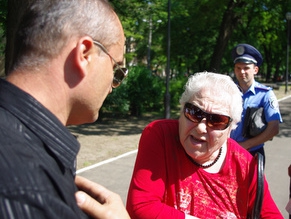