Trial begins of police officers over death of Laslo Kolomparov 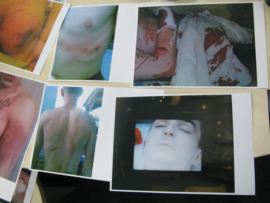 The trial has begun of two police officers over the death in custody in January 2011 of Laslo Kolomparov.

As reported, 39-year-old Laslo Kolomparov supposedly jumped out of a window of the Loziv Police Station. He had a closed head and skull injury, concussion, numerous rib fractures, an injury to the chest cage, a broken shoulder and burst liver and bladder. He died during the night of 15 January 2011.

The police claimed at the time that Laslo Kolomparov, together with his wife had come of their own free accord to the police station.The police suspected him of selling drugs. They assert that he threw himself out the window and deny torturing him.

At the time his family asserted that he, his wife and small daughter had been taken to the police station by force. They say that both Laslo Kolomparov and his wife were tortured in front of their daughter, and that having understood that Laslo could not survive his beating the officers threw him out the window. His family says that it was not only his wife and daughter who saw that he was beaten and given electric shocks, but other witnesses.

The two officers are charged under several articles of the Criminal Code: torture; exceeding official duties leading to grave consequences; bribes; infringement of inviolability of ones home.

According to Laslo Kolomparov’s father, the officers deny any guilt and have said in court that they did not torture Kolomparov.