16 September – In Memory of Gongadze and other slain journalists 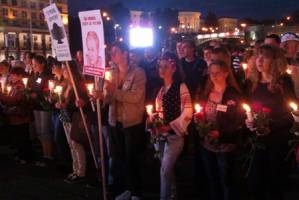 On Sunday evening, 16 September – 12 years since journalist Georgy Gongadze was abducted – a meeting in remembrance was held on Maidan Nezalezhnosti [Independence Square] / 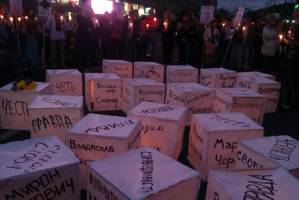 Around a hundred journalists and other members of the public gathered to remember Georgy Gongadze and other Ukrainian journalists killed.  They lit candles which burned in boxes with the names of the journalists.  These were burned at the end symbolizing a funeral pyre for freedom of speech in Ukraine.

The participants held Ukrainian flags, and a placard with the silhouette of Georgy Gongadze’s head in black against a white background with the words: “12 years of cynicism. How much more?”

People also had portraits of the current Speaker of Parliament Volodymyr Lytvyn, former President Kuchma and the former head of the Security Service Leonid Derkach with the words: You should be behind bars.  They wanted to stress that “the whole world knows who was implicated in the murder of Georgy Gongadze yet they have still not been held to answer”.

The participants later formed a procession and set off in silence to the President’s Administration to express their protest at the inaction of the authorities in investigating cases where journalists have been killed.

From Ukrainska Pravda and ЛігаБізнесІнформ (where the photos are from) 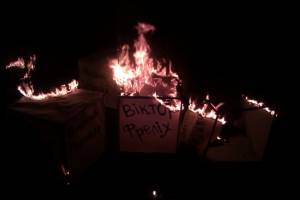