LGBT Equality March banned in KyivOn attempts by the Kyiv authorities to ban the March for Equality on 25 MayHRW calls for investigation into attacks on LGBT protestAnti-Discrimination Coalition calls on parliament to revoke anti-gay billUkraine draft law banning homosexual references violates freedom of expression – UNSecretary General Jagland concerned over law on homosexuality in UkraineLaw banning „promotion of homosexuality” just as dangerous as libel lawEU deeply disappointed by anti-gay bill in UkraineMPs support homophobiaProposed laws discriminate against LGBTI people and violate children’s rightsMPs want to ban "propaganda of homosexuality"Beaten Ukrainian gay activist unbowedConcern in Europe over homophobe violence in KyivOn Homophobia in Ukraine and its consequencesFirst-ever Kyiv pride cancelled in face of ultra-right threatParliamentary Committee approves law banning „propaganda of homosexuality”UHHRU condemns plan to bring in liability for “propaganda of homosexuality”Former HR Ombudsman Lyudmyla Denisova on her dismissal, 4 years of work, Ukrainians in occupied areasCourt in Ukraine passes first real sentence over homophobic attack A brief description of the KHPG strategic litigations in the first half of 2021
• Topics / Freedom of peaceful assembly

A modest first for Ukraine 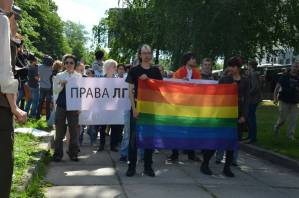 That Ukraine saw its first Gay Pride March on Saturday is something of an achievement. The event was much more peaceful than in Moscow where at least 30 people were detained, and there were scuffles.

This, however, was to a very large extent because the initial march – formally a March for Equality- was banned following an application from the Kyiv City State Administration.   The latter had argued that the March would clash with events to mark Kyiv Day.  A week earlier the same authorities had made no effort to ban an “antifascist” demonstration organized by the ruling Party of the Regions to compete with an opposition “Rise Ukraine” rally planned long in advice.

The authorities and police then showed shocking passiveness when two journalists were attacked, and the degree to which hired thugs had been enlisted for the events on 18 March could only exacerbate tension a week later.  The fact that around 100 people joined the March is therefore cheering

The irony is that members of the right wing VO Svoboda Party who criticized police behaviour on 18 May and rightly condemn encroachments on freedom of peaceful assembly in general have no such respect for members of the LGBT community.  They had promised to be out in force to ensure the court ban was implemented.  Since their homophobic views and behaviour have been expressed in violence on many occasions, tension was high because of likely aggression from them and provocation from others.

Thankfully the March, whose route had been changed and not publicized, went fairly peacefully.  A delegation from Munich, a city twinned with Kyiv, took part

Around 10 people were detained, but seemingly from those trying to disrupt the event.

There had also been legitimate concern after the organizers of the event last year were advised to cancel it.  One of the reasons was a brutal attack on a prominent Gay Rights campaigner Sviatoslav Sheremet.

Over the last year Ukraine has also followed another dangerous initiative set by Russia with a number of bills tabled in parliament proposing to ban what their authors call “promotion of homosexuality”.  With anti-discrimination in Ukraine woefully inadequate, adoption of any of the draft bills presently tabled would drag Ukraine back at very least to Soviet times and have the gravest implications for freedom of expression.