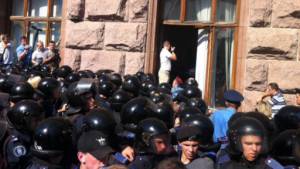 Attempts by protesters to prevent a much disputed session of the Kyiv City Council on Monday morning failed and the session went ahead, lasting a mere 15 minutes. During that time the Council, whose legitimacy is much disputed, allocated 100 million UAH on municipal supplementary payments for public sector workers and construction; added 37 new posts to the Kyiv City State Administration and passed four resolutions and three appeals to the Verkhovna Rada without any discussion at all.

As reported, the Council’s term of office has expired, and elections are overdue.  The ruling party is, however, blocking all efforts to call new elections which would almost certainly bring results which they don’t want.  There are also fears that measures such as the increase in staff and powers of the Kyiv City State Administration are aimed at creating a counter to a future Kyiv Mayor and Council.  The head of the Administration is appointed by the President; the Mayor elected by Kyiv residents (more detail here)

Hundreds of protesters on Monday were confronted by a large contingent of Berkut riot police guarding the Council building.  Some opposition MPs have made formal complaints to the Prosecutor General, asserting that they were beaten.

Deutsche Welle reports that up till now the members of the opposition and civic activists who are demanding elections have run up against Berkut officers and young athletic types (generally hired for their brawn and thuggish behaviour).  This time around 3 thousand public sector workers - teachers and doctors – were brought in in a supposed demand for their supplementary payments.  The 300 UAH per person involved is indeed sorely needed by doctors and teachers whose monthly salaries are pitifully low.

Political analyst Serhiy Taran calls the events outside the Kyiv Council political technology, and says that the authorities have an interest in budget workers being poor and dependent.  This makes it easy to use them for their own purposes. He adds that puppet trade unions only help the authorities,   The public sector demonstrations took place under the banners of the Federation of Trade Unions of Ukraine and branch-based unions.

Taran adds that Kyiv teachers, medical and transport workers themselves understand that the current authorities in Kyiv have no legitimacy.  They succumb to pressure from their unions out of fear of losing their jobs. “In Europe trade unions are active in defending employees’ rights, here their criminal organizations which bring people onto the streets to defend the interests of those in power.”