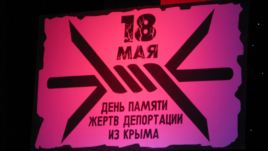 18 May. Remembrance Day for the Victims of the Deportation

The website 15minut.ua reports that a book by the Crimean historian and Director of the Tavrida, Andrey Malgin contains a gross inaccuracy.  In  “The Crimean Partisan movement and the “Tatar Question” Malgin presents Cossacks who collaborated with the Nazis as Crimean volunteers.

Veteran of the Crimean Tatar national movement Murat Voyenny noticed the misleading caption to a photograph and demonstrated copies of the relevant pages from two different books.  Each contains the photography but the captions are different.

In a book by Russian historian Sergei Drobyazko “Under the flag of the enemy. Anti-Soviet formations within the German armed forces”, published in Moscow in 2004, the caption to exactly the same photograph is: “Awarding Cossacks of the Platov Regiment”.

Malgin told the publication that his title was correct, and suggested that the mistake was probably in Drobyazko’s book.  15 минут contacted Drobyazko who is adamant that the photograph shows a soldier from the Cossack regiment receiving an award. He says that the Platov regiment was formed by the Nazis in the summer of 1942, from Kuban, Tver and Don Cossacks. He points out that soldiers of that regiment alone wore red and white military insignia.

15 минут  decided to check by seeking out a copy of the Nazi propaganda publication Signal for June 1943.  This, they found, unequivocally confirms Drobyazko’s version.  The date is also wrong in Malgin’s version, since the photo appeared in a journal in 1943.

The very fact that Malgin repeats most of the earlier – and accurate – wording under the photograph would make it difficult to believe that he acted in good faith.  The photograph also accompanies text in which Malgin writes of what he alleges was “the large-scale nature of Crimean collaboration”.

Murat Voenny told 15 минут  that the photograph and misleading title are part of a deliberate campaign aimed at discrediting the Crimean Tatars and trying to justify the 1944 Deportation.

There are ample grounds for such suspicions.   A book entitled “Remembrance Book of the Eastern Crimea” was recently published with local authority funding.  This also accuses the Crimean Tatars of collaboration with the Nazis and effectively justifies the 1944 Deportation.  Although there have been statements that a criminal investigation has been initiated into how public funding came to be used, there is little confidence that any real measures will be taken.

Optimism would seem especially misplaced under the current Prime Minister of the Crimea, Anatoly Mohylyov.  The latter came to well-deserved notoriety back in 2008 with an article “A conflict along the lines of Kosovo is brewing in the Crimea” in which, together with general hate speech, he claimed that the Crimean Tatars had been guilty of treason during the War.

It should be stressed that the Soviet regime itself acknowledged back in September 1967 that the accusations made by Stalin and his henchmen as supposed justification for the 1944 Deportation were unfounded.

Despite outrage over the article, Mohylyov never apologized or retracted his accusations.  None of this deterred Viktor Yanukovych from appointing him head of his presidential campaign in the Crimea, and then in March 2010  Interior Minister.  It was also Yanukovych who appointed him Crimean Prime Minister in November 2011.   It therefore seems most unlikely that Mohylyov’s policies in the Crimea do not have the backing of the President.  These include clear efforts to undermine the influence of the Mejlis of the Crimean Tatar People, and to heighten tension between different groups in the Crimea.

All of this is especially disturbing in the light of the problems highlighted in a recent OSCE Report commissioned by the High Commissioner on National Minorities, which stresses that:

“Crimea faces a volatile mixture of acrimonious political competition, socio-economic exclusion, inter- and intra-religious strife and a general atmosphere of increasing intolerance. The risk of inter-ethnic violence is real and requires urgent attention, both from Ukraine and from its international partners.”

There are all too many indications of readiness to fuel the problems, none that those in power wish to seek solutions.