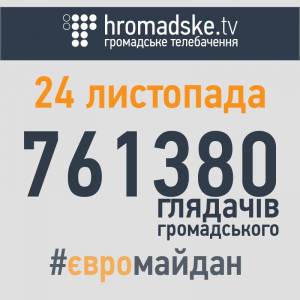 Hromadskie.tv –  the public broadcasting initiative started by a group of independent journalists began broadcasting on 22 Nov and immediately proved how vital such a resource is.  It reports that during the Euromaidan procession and rally on 24 Nov it had 761 380 viewers.

The text below was supposed to go on site on Nov 21 however events, chiefly the government’s about-face on the EU-Ukraine Association Agreement knocked all other stories.

The journalists announced the initiative back in June when they set to preparing a broadcasting system which they hope will work for many years.  On Nov. 5 an updated site was opened here: http://hromadske.tv/

Up till 22 Nov around one video was posted each day, as well as interviews with Ukrainian artists. One of the project’s initiators Natalya Humenyuk explains their choice of format by saying that there are too few faces seen in the media: “The same 15 people always say the same thing although there are far more people in Ukraine who it’s worth hearing”.

The first direct broadcast is scheduled for Nov 22, followed by TV marathons broadcast live on the Eastern Partnership Summit in Vilnius and the elections in 5 problem constituencies.

The first programmes will be information based, however not exclusively political, but about all aspects of life in Ukraine. Humenyuk explains that they hope to improve the quality of discussion in Ukraine, make it more substantive and broaden the circle of participants.

The planning has been extremely thorough with a development strategy for the first year and then the following 2-5 years of its work. They were able to buy technology thanks to a grant from the US Embassy in Ukraine, as well as through donations from Ukrainians.