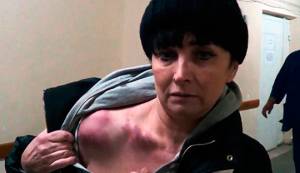 Svitlana Malytska, journalist and photographer for traffic police watchdog Road Control was brutally assaulted in the lift to her flat on the evening of Dec 16 less than 2 weeks after two colleagues were remanded in custody on highly questionable charges.  Two men appear to have been lying in wait and got into the lift with her.  She reports that one of them, who looked around 30, immediately began trying to suffocate her, and inflicted blows to her body, while the other, around 50, just watched.

Both the foul language that the assailant used (roughly “Road whore”), and his threats were clearly linked with her work for Road Control.

The assailants were thankfully scared off by other residents and the police and an ambulance were called.

Malytska’s work has enabled Road Control to win over ten court cases against the Kyiv prosecutor’s office, and regional prosecutors.

This was then followed by the arrest of Viktor Smaliy, the Road Control journalist representing Dzyndzya  (details here: Panas, Dzyndzya, Smaliy: Message Received. What now?

In November Road Control journalist Andriy Zhukovyen was granted political asylum in the United States.  The founder of Road Control, Rostyslav Shaposhnikov is currently in Poland.  He told Radio Svoboda that he had left Ukraine to avoid being arrested