No answers over Nov 30 brutal dispersing of peaceful EuroMaidan 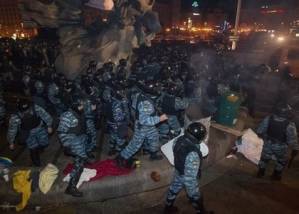 Exactly one month after Berkut riot police savagely dispersed hundreds of entirely peaceful pro-EU protesters on Maidan Nezalezhnosti, EuroMaidan activists will be holding a candle-lit gathering in the same place to demand answers.  Prosecutor General Viktor Pshonka is still claiming that his people have not ascertained who ordered the action and which officers were involved.  Most importantly, aside from the largely symbolic dismissal of three public officials, there is little sign of real will to hold those responsible to account.

There was one positive move forward on Dec 23 when the District Administrative Court allowed a civil suit and ordered the Interior Ministry to provide orders and other documentation regarding the use of the Berkut officers.  On a more negative note it rejected equally legitimate demands for information from others including the Prosecutor General, the ambulance service and hospital.  There has been enormous secrecy about injured protesters, and pressure on medical staff to conceal the real details about the patients they treated, so such information is clearly needed.

During his address to parliament on Dec 21, Pshonka produced carefully edited video footage showing activists attacking police officers.  When asked angrily why he was refusing to let opposition MPs show the videos demonstrating Berkut violence against peaceful demonstrators showing no resistance on Nov 30, Pshonka claimed that “everybody had seen those videos”, and he wanted to show the others “for balance”.

Everybody has indeed seen them. They give the lie to almost every word spoken by the country’s chief law enforcer.

Pshonka claimed that the police had repeatedly issued clear warnings calling on people to vacate the square, and that they had also created a corridor for protesters to leave safely.  This is not borne out by the video footage, testimony of protesters and of witnesses.  Protesters were forced to seek refuge in St Michael’s Monastery with Berkut officers actively pursuing them.   Medical workers who endeavoured to treat injured protesters were themselves beaten.

According to a report complied by the Association of Ukrainian Human Rights Monitors on Law Enforcement [UMDPL], there was clear breach of the Police Act and other legislation with the Berkut officers’ use of force and special means coinciding with the warning.  UMDPL says that this meant that some people had not even woken up.  The report condemns the “indiscriminate, wide-scale, brutal and cynical manner in which the Berkut officers kicked and beat protesters with rubber truncheons and their fists without considering their age, gender or physical condition”.

Outrage in Ukraine and international condemnation forced Ukraine’s leaders to produce statements of concern, and promise that those who had used “excessive force” would be punished.

Even if there were any grounds for believing the promise, it would still be pitifully inadequate.  Certainly the Berkut officers behaved in a savage fashion, however their very deployment was in grave breach of the law.  The use of this special force is regulated by an Interior Ministry order which states explicitly that Berkut officers are brought in for dealing with difficult situations where force is required.  The people on Maidan were talking quietly or asleep, and Berkut should not have been there in the first place.

Pshonka produced questionable chronology and altogether too many words to try to justify the deployment of men trained for conflict situations on the grounds that municipal workers supposedly needed to erect the New Year tree and an ice skating rink.  It was, he alleged, “all directed at protecting public order”,

One of the lines which Pshonka pushed strongly was the involvement of “members of radical gangs who pretend to be civic organizations, including sports groups.”  These individuals, he alleged, caused confrontations with the police.

On Nov 29, there were indeed a large number of “titushki” or athletic-looking thugs in Kyiv, most of them gathered in Mariyinsky Park.  They certainly behaved aggressively, but not towards the police.  During the day there were at least two attacks on journalists from media providing coverage of the EuroMaidan protests.  It was widely reported that they had been brought in to Kyiv for the pro-government demonstration planned for Sunday.

Pshonka’s repeated assertions are especially interesting given well-founded grounds for suspecting that the trouble on Bankova St on Dec 1 caused by a crowd of young masked louts was deliberately organized.  It was largely during those events that interior ministry conscripts, and possibly police officers, were injured

The actions by Berkut on Bankova St are also criticized by UMDPL in their report, however the situation was somewhat different with the deployment of a special force  unit in principle legitimate.

This was demonstrably not the case on Nov 30 and attempts to merge the two situations must be withstood.  The brutal actions on Nov 30 gave new vigour to the EuroMaidan protests and prompted widespread demands for the government’s dismissal, the president’s impeachment, and for sanctions against those now in power.

Failure to carry out an honest investigation and do more than dismiss a few obvious scapegoats will show that all those calls were entirely justified.