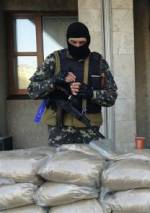 The Luhansk Regional Branch of the Committee of Voters of Ukraine [LRB CVU] has issued a statement saying that election commission members must not be used as cannon fodder in the fight between the Kyiv authorities and Luhansk separatists.

It says that over recent days it has received numerous calls from heads or members of election commissions from Luhansk; Antratsyt and Krasny Luch [electoral districts 105; 106; 109 and 111) asking for advice. Should they work or stop?  How dangerous is it, and will their work be paid if the work of the district election commissions [DEC] is blocked?

“Yet at the same time  the commissions are receiving verbal instructions from the Central Election Commission to continue working, and national media praise the bravery of members of the commissions who are working in conditions of real danger and threats. Some journalists are literally storming our telephones, demanding contact details for the heroes who’ve been subjected to beating or abducted.

In view of this, the LRB CVU board must remind Ukraine’s authorities that in a country which respects its citizens, members of election commissions are not forced to fight with radicals, and especially, with armed radicals. And where there are threats to voters and election commissions, they are either provided with the proper security at polling stations or the elections are not held.”

On the territory of 10 out of 12 election commissions in the Luhansk oblast it is the separatists that are controlling the situation, not the Kyiv authorities. The separatists have already stated that they will prevent the May 25 elections and have demonstrated their willingness to use violence to that end. The adoption on May 15 of a law stating that the premises of DEC should be guarded by the police 24 hours is nothing more than hypocrisy. After all in the Luhansk oblast there are no police loyal to Kyiv. There are police loyal to the separatists.

To encourage the election commissions to continue working in such conditions means deliberately exposing the people working in them to danger. This, in our view, is unacceptable for a civilized state.

In view of this we strongly recommend that the government and the CEC:

Due to the suspension of the precinct commissions’ work, it will not be possible to hold the early elections for mayor of Rovenki; Antratsyt; Perevalsk scheduled for May 25.

-   Carefully analyse the possibility of holding the presidential elections on May 25, 2014 on the territory of electoral districts 110 and 113. In the absence of the proper resources for ensuring the safety of voters and members of the electoral committees elections in these districts should not be held either for president or for mayor of Lisichansk.

-   heighten security on the territory of electoral districts 114 and 115, primarily with respect to the possibility of movement of para-military formations.

-  consider the possibility of reinstating the work of district commissions as per Article 19.4 of the law on the presidential elections in order to meet all financial obligations to people who have already carried out a significant part of the preparations for the elections.

-   ensure that those residents of the Luhansk oblast whose polling stations do not open  can vote in other districts.