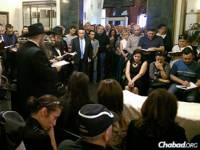 On Aug 30 Georgy (Eliayagu) Zylberbord was murdered in Donetsk by pro-Russian militants.  He and a security guard had tried to stop the terrorists from plundering the cottage settlement on the outskirts of Donetsk where he lived.  The Kremlin-backed militants murdered both men.

The Eurasian Jewish Congress reports that Zylberbord was 47 years old, a businessman, supporter of the arts and community, and a member of the board of the Donetsk Jewish Community.

Rabbi Pinkhas Vyshedski, a close friend of the murdered man, says that Zylberbord was a regular synagogue goer and generous supporter of the Donetsk Jewish community.  For him and his wife Zylberbord was like a member of their family.

Rabbi Vyshedski left Donetsk because of the troubles and has opened an office of the Donetsk Jewish community in Kyiv. This helps Jewish people from Donetsk who’ve been forced to flee and have sought refuge in Kyiv and other parts of the country.

Most Jewish people from Donetsk have left the city and are living in camps for displaced people, community centres or renting flats in other cities. Some fled to Mariupol and are now again in danger as the militants together with strong Russian reinforcements advance.

Although there were concerns among the Jewish community in Donetsk back in April over leaflets purporting to be from the self-proclaimed Donetsk people’s republic, there is no reason to believe that Zylberbord was killed because he was Jewish.  Militants from the DPR have gained notoriety over recent months for plundering; violence; hostage-taking and also killings.

Once again there is no evidence that the four were killed because they were Christians, although they were abducted from a church service.

The pro-Russian militants have, however, made it quite clear including in something they call their constitution that they recognize only the Orthodox Church of the Moscow Patriarchate.

Those clerics, such as Mufti Said Ismagilov and Pastor Sergei Kosyak who have remained in Donetsk both to help in evacuation efforts and to provide spiritual support for local believers, are thus in constant danger from the militants.