Russia plans fast-track removal of Ukrainian refugees to SiberiaPresident vetoes flawed displaced persons lawFurther calls for veto of internally displaced persons lawMysterious money supposedly allocated for refugeesKHPG statement on the adoption of a law on internally displaced personsLaw on Internally Displaced people comes in for criticismHelp for Forcibly Displaced PeopleNo mechanisms in place for dealing with refugees from the CrimeaCrimean Tatars and others face citizenship dilemmaRussian methods: Calls for Crimea’s return to Ukraine could get you imprisonedMGIMO historian fired for article comparing Crimean annexation to Hitler’s AnschlussInformation channels at warDonetsk Front in Putin’s Dirty WarScurrilous rumours used to spread fear and distrust in Eastern oblastsAutoMaidan activist shot at near ChongarRussian troops already deployed in mainland UkraineThe Crimea is our Home: Get your troops out!Crimean "referendum" a grotesque farceCrimean Tatars call on all Crimeans to boycott "referendum"Avoiding Ukraine’s language minefields
• Topics / On refugees 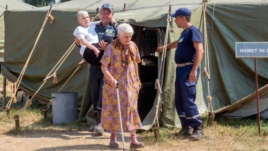 The head of the State Emergency Service has reported that for the first time people are returning to eastern Ukraine, rather than leaving the area where fighting has been underway. Serhiy Bochkovsky reported that over the last 24 hours 2, 281 people returned, with 1, 863 of these coming back to the Donetsk oblast.  Overall 39 thousand, 550 people have so far returned.  He attributed the return to  the gradual restoration of infrastructure, etc.

Bochkovsky added that people are continuing to leave, however the numbers are diminishing by the day.  Whereas earlier thousands were leaving each day, over the last 24 hours 391 people left the area of conflict in Donbas and the Crimea, with 109 children among these, and 94 invalids.