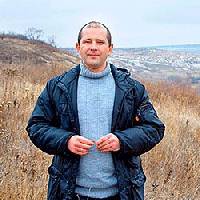 His wife Ksenya Tretyakova told Telekritika that Bilokobylksy has phoned her on Sept 26, in the morning, and said that he’d been freed.

The militants knew that he was a journalist and were able to look through his material and his contacts on his laptop.  He himself was used for manual labour, loading sandbags.

As reported, Oleksandr Bilokobylsky was abducted on Sept 13 after he set off from Kharkiv to take food and medicine – both for his sister who has asthma and for a friend whose child has epilepsy.

The 32-year-old journalist has written for a number of local newspapers as well as for Obozrevatel and the Russian RIA Novosti.  He has recently been living in Kharkiv with his wife and 10-month old son.

There is no news about the whereabouts of Serhiy Saladynsky, head of the Luhansk Eastern Ukraine Centre and chief editor of an Internet publication Politika 2.0, since July 28 who is also believed to be in the hands of the LPR.