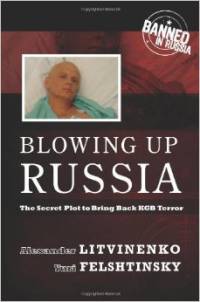 Russia has placed a book written by former FSB officer Alexander Litvinenko on its list of extremist materials and forced an Internet library to remove it.  This comes 3 months after Russian President Vladimir Putin awarded a state honour to the man suspected of killing London-based Litvinenko with radioactive polonium.  Putin’s award was “for courage and daring demonstrated in carrying out work duties in conditions linked with risk to life”.

The book now banned in Russia was written by Litvinenko and Yuri Felshtinksy and certainly has a shocking title, in the original English version, namely: “Blowing up Russia: Terror from Within”.  This is no manual for aspiring terrorists however, as becomes clear from the Russian title:  "ФСБ взрывает Россию" [“The FSB blows up Russia”].  The book accuses the FSB or Security Service of being behind the Russian apartment block bombings in Moscow, Buynaksk and Volgodonsk in September 1999 which killed 307 people.  The official version was that the bombings were the work of an armed group from the Northern Caucasus, however there were rumours at the time that the bombings had been carried out by the FSB.  The authors allege that this was in order to raise Putin’s popularity after Boris Yeltsin’s handover of power to him.  According to open sources,  Felshtinksy, a US national,  decided to investigate the bombings and persuaded Litvinenko to join him, presumably because of the latter’s insider knowledge of the FSB.  Litvinenko had fled to the UK in 2000 and received political asylum after attempts to prosecute him over allegations he made about an FSB plot to murder Boris Berezovsky.

Russians have now been prevented from assessing the merits of the authors’ investigation for themselves  The work is now No. 2791 on the List of Extremist Materials with people facing prosecution if they try to circulate or publish it.

This is the most open ban, however efforts previously to bring copies of the book into Russia, and a film based on the book "Покушение на Россию". have always run into problems.  Copies of the film, which was sponsored by Berezovsky, were stopped at customs.  Grani.ru reports that in December 2011, during a wave of protests in Russia over Putin’s plan to stand for a third term as President, a permit was initially issued to show the film, but was then withdrawn.

Alexander Litvinenko died in hospital on Nov 23, 2006, after falling ill on Nov 1 with what the bemused doctors finally understood to be radioactive polonium-210-induced acute radiation syndrome.

He had met with two Russian nationals – Andrei Lugovoi and Dmitry Kovtun – in the Millennium Hotel on Nov 1, and it is they who are alleged to have put the polonium in his tea.  Scotland Yard had plenty to go by, all of it deadly and “linked with risk to life”, since radioactive polonium was found in all the places the men had visited, and even the seats they occupied on the BA plane back to Moscow.  Lugovoi was mentioned as key suspect very soon, but Britain’s request for his extradition was rejected, and in September 2007, Lugovoi became an MP in Vladimir Zhirinovsky’s LDPR Party.  In March 2015, Putin honoured Lugovoi, described as the deputy head of the State Duma Committee on Security and Countering Corruption.  Since no other information was provided for a highly provocative award, it is worth reiterating that we are told only that it was “for courage and daring demonstrated in carrying out work duties in conditions linked with risk to life”.

Despite the enormous weight of evidence against Lugovoi and Russia’s unwillingness to cooperate with the British investigators, Britain long avoided the damaging effect, particularly to its economic interests, of giving the case too much publicity and a full inquiry into Litvinenko’s murder only began in January this year.  By February the Guardian’s Luke Harding was reporting that “the case against Lugovoi and Kovtun looks unassailable”

Another of Harding’s reports is entitled “Litvinenko report on Putin ally was motive enough for murder, inquiry told”.  The inquiry was told that in the months before his murder, Litvinenko had been investigating a number of top-ranking Russian politicians including Viktor Ivanov, one of Putin’s closest allies and now the head of the Russian Federal Narcotics Agency.  The report which Litvinenko helped to write accused Ivanov of involvement in cocaine-smuggling.  The High Court was read an excerpt from the report stating that “When Ivanov was cooperating with gangsters he was protected by Vladimir Putin, who was responsible for foreign economic relations … Putin himself was not Mr Clean at that time.”

The use of polonium-210 precluded any possibility that the murderers could have obtained the poison on the black market.  The way the trail seemed to clearly lead to FSB and those in high positions in Russia was doubtless one of the reasons why the British government spent years avoiding this crucial inquiry.

All national media have avoided mentioning the report made public by slain politician Boris Nemtsov’s associates on May 12.  “Putin. War” makes very serious allegations about Putin’s invasion of Crimea and aggression against Ukraine.  The authors were able to find only one publisher in Moscow willing to publish this absolutely damning indictment of the Putin regime, and thus far only 2 thousand copies have been published.

It is frustrating that the US payment service Pay-Pal has blocked the Russian account for donations to publish the report.  Whatever pressure they are under from the Russian authorities can be nothing to that faced by the courageous authors of “Putin. War”.  Or the tragically real danger faced by Boris Nemtsov, Alexander Litvinenko, Anna Politkovskaya and many others.