“10% of Aidar Battalion volunteers joined for ulterior motives, not to fight” 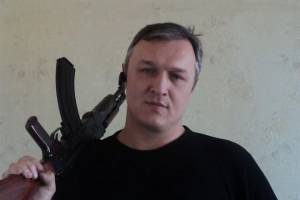 The trial is about to begin of Yury Hukov, journalist (writing as Yury Aseyev), one of the first members of the Aidar volunteer battalion who was briefly imprisoned by the now disgraced Aidar commander Serhiy Melnychuk and has since then worked for the Kharkiv Human Rights Group.

Hukov was arrested when he went himself to the police in order to issue a report about the death of his wife.  She was killed on May 23, 2015 while travelling in the same car as Kremlin-backed militant Alexei Mozgovoi.  Hukov has reason to believe that the killing of this leading militant in a shooting that also killed his wife was the work of a Russian spetsnaz unit, and was sanctioned by Vladislav Surkov, aide to Russian President Vladimir Putin.  His contact in Russia who gave him the information also said that Igor Plotnytsky, now the head of the so-called ‘Luhansk people’s republic’ knew of the plan to kill Mozgovoi, and that this suited him.

The journalist appeared with his report at the police station in Kharkiv on June 23, and was arrested.  It transpired that he had been on the wanted list since March, accused of breaking in and armed robbery of a separatist (‘separatist’ is the word all those commenting on the case use).  KHPG is convinced that the charges against Hukov are unwarranted, and he is represented by one of the Group’s lawyers.

The charges date back to June 2014.  KHPG Director Yevhen Zakharov explained to Censor.net that Hukov and three other battalion members were sent by Melnychuk to detain an alleged separatist.  They did not find him, only his wife. She made a lot of noise, neighbours came running, and the Aidar people decided to simply leave.  Zakharov says that one of the men took away a laptop and mobile phone so that Melnychuk could look at the man’s contacts.  Zakharov says that “the Aidar men had reliable information that the man they were looking for was a separatist and was taking part in anti-Ukrainian actions”.  He stresses that the man’s property was taken away at Melnychuk’s orders, but also asserts that it was Melnychuk who persuaded the wife of the separatist to lodge a complaint with the police.

Zakharov points to a whole range of procedural infringements, and believes that under no circumstances should Hukov be facing break-in and armed robbery charges.  He should also not be held in detention, particularly since at least his 13-year-old daughter were already living with him, and the two smaller children have now lost their mother.

Hukov left – or was thrown out of - Aidar in August last year after an extremely disturbing turn of events reported at the time.

In  an interview given to Censor.net a short time before his arrest Hukov explained that he had been active supporter of Euromaidan, one of a small minority in Alchevsk (Luhansk oblast) where he lived with his wife and three children.  It was obvious that he would take part in the actions to defend the country as Kremlin-backed militants began seizing control of whole cities.  He and five friends joined Aidar at the beginning of May, at the initial stages when the battalion was still being formed.  At the beginning Melnychuk made a good impression on him.

“Within a week of our arrival there were already 100 people, but it always worried me that 10% of them were people who hadn’t come to fight, but were pursuing their own aims. For that reason we had run-ins, both with the commander and with those volunteers”.

He says that after a while the battalion’s reputation began to deteriorate specifically because a part of the battalion, headed by Melnychuk himself, turned to looting and extortion.

He began to understand, he says, just what kind of person Melnychuk was.  On June 14 the Battalion seized the city of Shchastya back from the militants and took a militant commander, nicknamed Batya prisoner. The latter was believed by many in the area to be responsible for abductions and torture of hostages.  Hukov came into conflict with the Aidar command after he objected to the torture that Batya was subjected to and tried to persuade Melnychuk that prisoners must be given proper medical treatment.  Batya died, and Melnychuk’s response to Hukov was that if he was so smart, he could spend time imprisoned in the basement.

He was put there for 8 days, though was released earlier after somebody let him use a mobile phone to text the Interior Minister Arsen Avakov and news of his imprisonment was reported by the media.

The death of Batya was the reason mentioned in reports at the time, and since, however Melnychuk did try to justify the imprisonment, claiming that Hukov was suspected of various crimes.  It is possible that this was the reason for the report against Hukov over the unsuccessful attempt to take ‘Separatist S’ into custody, and the charges he is now facing..

After being released, Hukov did not continued in Aidar, and from August onwards he was working for the Kharkiv Human Rights Group. .

Both before and after moving to Kharkiv, he tried to persuade his wife to leave the zone of conflict, but she refused.  He explains that his wife was a devout Christian and close to the Orthodox Church of the Moscow Patriarchate.  Hukov says that it was her priest who told her she shouldn’t leave.  She began working with Mozgovoi back in September.  The full name of Mozgovoi’s brigade, Hukov points out, was “the communist-Orthodox Prizrak brigade” and he believes it was the shared Orthodox views that led her to cooperate with this leading militant.

Although the two became totally divided on the ideological front, they had lived together for 14 years and had three children, who have now lost their mother and are deprived of their father who is held in detention.

The accusations of illegal abductions and detention, theft, extortion, etc. against Aidar began fairly early and were articulated in a report issued by Amnesty International on Sept 8, 2014.  Melnychuk was elected to parliament as member of Oleh Lyashko’s Radical Party in October 2014, but was expelled from the party in February this after the storming by Aidar fighters of the Defence Ministry.  He was stripped of his parliamentary immunity in June and is under a signed undertaking not to leave Kyiv.  He faces charges of organizing an illegal group for the purpose of abductions and robbery.