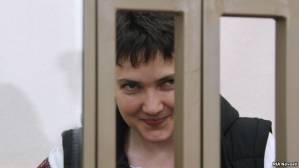 Ukrainian military pilot Nadia Savchenko stands inside a defendants’ cage as she attends a court hearing in the Russian city of Donetsk on October 26.

At first glance, there’s not much in common between a tough-as-nails Ukrainian military pilot jailed in Russia and a middle-aged Belarusian intellectual recently awarded the Nobel Prize for literature.

Nadia Savchenko and Svetlana Alexievich, however, have voiced deep admiration for each other.

The two women, who have never met, also share a strong distaste for Russian President Vladimir Putin, including for the macho stunts he regularly pulls on Russian television.

"As for Putin riding a horse bare-chested, in a fighter jet, and putting out fires, hunting in the taiga, on a ship, a submarine, and wherever else he promoted himself, I say: ’Well done! Every man must know how to do these things, ’" Savchenko wrote in a letter to RFE/RL. "But that’s the irony: I’m a woman, and, just imagine, I know how to do all these things, too."

Savchenko has been held since July 2014 and charged with participating in the killing of two Russian journalists in war-torn eastern Ukraine and of crossing into Russia illegally -- charges she vehemently denies.

Not Asking For Mercy

The pilot, whose detention has made her a national hero in Ukraine, says she was illegally brought into Russia after being abducted by Russian-backed separatists amid fighting with Ukrainian government forces in eastern Ukraine.

Her lawyers say they have phone-billing data proving that she had already been detained when the journalists were killed.

Her high-profile trial, denounced in the West as political retaliation against Ukraine, is currently taking place in Russia’s southern Rostov region. She faces 25 years in prison if convicted.

Savchenko told RFE/RL she had no intention of backing down in her standoff with Putin. "I won’t ask for mercy from this piece of filth, " she wrote. "He’s already lost his fight against me, considering the fact that I’m a gal and he’s a guy."

"Time will tell which one of us has the bigger balls, " she concluded.

Savchenko was responding to an interview with RFE/RL in which Alexievich, too, mocked Putin’s topless horse-riding photo, in which he was pictured against a mountain backdrop in Siberia in 2009.

Alexievich made the comments in February after signing an open letter asking Putin to release Savchenko, who currently has formal immunity as a member of Ukraine’s delegation to the Parliamentary Assembly of the Council of Europe.

"When I signed this letter, I remembered the famous picture showing Putin on a horse, half naked, with this powerful torso, " she said. "How is this compatible with the fact that a man is fighting a woman? Such strong, interesting women?" she asked.

"In the worst of wars it’s still the practice to respect the resilience and the will of the enemy. Even the Germans did this during World War II, there are many such examples, " she continued. "But for some reason the Russian authorities are incapable of this."

Alexievich also praised the jailed pilot for her integrity and said her only crime was doing her duty as an officer to defend her country.

In her letter, Savchenko admits that she has not read any of Alexievich’s books but that she has already ordered some of them from prison; specifically her first novel, War’s Unwomanly Face.

She says she had misgivings when she first heard the novel’s title, but now realizes that the Belarusian writer is, just like her, a staunch advocate of women’s empowerment.

"I understood that our opinions largely coincide, that this book is not a chauvinistic treatise about a woman’s place being in the kitchen, " she wrote. "Quite the opposite."

The original report in Russian can be found here