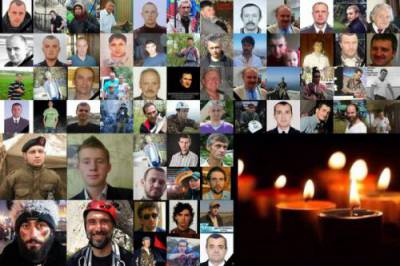 On this day I first understood that you can have no fear. None at all. When there is something that is much more important than your fear, inability, illness, tiredness. When next to you young men, only a little older than your granddaughter, are bleeding.  When they die in your arms and you don’t even howl from impotence, but do what is needed so that the next person does not die.

When the thought is pushed deep down in your subconscious that “I’m not a surgeon, I can’t do this” and your hands recall what they were able to do more than thirty years ago. Did you think that would never be needed?

Lord, I didn’t remember a single face.  The wounds I remembered, not the face.

I remembered the one with a smashed head, all covered in blood, who shouted down the telephone: “Mama, I’m at the university.  I’m in the laboratory.  Mama, I’m busy I can’t talk right now.

And the one with arms and face in burns who cried “Babusya, help”.

And the one whose fine veins protruded from each wound on his thigh, ripped apart by a grenade…

And the one who carried the wounded from the Trade Union Building shortly before the fire.

We passed through a column of titushki [government-paid thugs] on Velyka Zhytomirska.  An idiotic thought from literary life: “We won’t be touched, I’m a doctor, we have wounded people with us.  It’s good that our driver’s mind was working differently.  We took the wounded to an underground (as in unofficial) hospital on Podil.

Are the young lads alive. I don’t remember the faces, I don’t know their names. Today we need to pray for all of those who were with us then.  To thank them – the living and the dead.

To remember that we are not given trials which we cannot endure.

That human life is very fragile.  To be able to help those who are most in need of help.

A Point of No Return

20 February was a Thursday in 2014.  On Friday evening before it became known that Yanukovych had fled from Kyiv, journalists and presenters on one of the main national TV channels, “Inter” heard in a live broadcast that they personally had lied and twisted the truth about Maidan for three months, and that they too had the blood of the dead on their hands. It was very closely not what presenter Andriy Danylevych was expecting.  Inter had from the beginning of Viktor Yanukovych’s presidency been one of the worst offenders for lies and muffled news, and this had become particularly acute during Euromaidan.  Danylevych had invited STB journalist Lidia Pankiv to recount how she had restrained Berkut riot police from turning on protesters and became the fiancée of one of the men.

“You probably want to hear a story from me about how with my bare hands I restrained a whole Berkut unit,   And how one of the Berkut officers fell in love with me and I fell in love with him.  But I’m going to tell you another story. About how with my bare hands I dragged the bodies of those killed  the day before yesterday. And about how two of my friends died yesterday. . … I hate Zakharchenko, Klyuev, Lukash, Medvedchuk, Azarov.  I hate Yanukovych and all those who carry out their criminal orders.  I came here today only because I found out that this is a live broadcast.  I want to say that I also despise Inter because for three months it deceived viewers and spread enmity among citizens of this country. And now you are calling for peace and unity. Yes, you have the right to try to clear your conscience, but I think you should run this programme on your knees.  I’ve brought these photos here for you, so that you see my dead friends in your dreams and understand that you also took part in that. And now, I’m sorry, I don’t have time.  I’m going to Maidan. Glory to Ukraine”.