Eight months of abductions and torture, as Russia’s terrorism intensifies at the Zaporizhzhia nuclear power plantUkraine’s penitentiary institutions and the war‘Mogilisation’. Anti-war activities in Russia, 26 September to 1 OctoberThose who unleashed this war will not go to Heaven. Anti-War activities In Russia, 7-14 August 2022“I Gave the Dogs Vodka to Keep Their Hearts Going” (Mariupol Resident)“PEACE lost”– digest of Russian protests (UPDATED)"They gave us no protective gear apart from a helmet and a cross" – the disabled in Ukraine’s Occupied Territories are being forced to fight Horrific conditions and torture in Russian filtration camp ‘ghetto’ for Mariupol residents ‘Back in the day Shoygu and I saved Neftegorsk after an earthquake and now he turns Mariupol into it’Romani Voices From Hell: Discrimination, Epidemic, War‘The enemy was just under our windows…’ – Anastasia from IrpinRussian invaders raid Kherson oblast home of member of the Crimean Tatar Mejlis and former political prisoner ‘I saw fire arrows flying from Kherson...’Russia tries to imprison blind and disabled Crimean on insane ‘terrorism’ charges Children among the dead after Russian invaders opened fire on fleeing civilians Report concerning the investigation of the mass unlawful use of force to the convicts of the Oleksiivska correctional colony (No.25) on January 8, 2020 Blind Crimean political prisoner prevented from reading why Russia wants to imprison him for 20 years Blind Crimean charged with ‘terrorism’, after Russia's FSB plant ‘prohibited books’ he can’t readA brief description of the KHPG strategic litigations in the first half of 2021Russia’s religious persecution for statistics in occupied Crimea
• Topics / News from the CIS countries

’They Took Everything Away’: Russia’s Disabled Hit Hard By New Rules 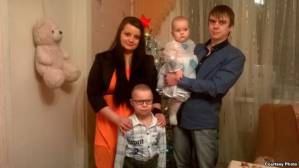 Although he relies on a daily cocktail of drugs to survive, Marina Nizhegorodova’s 5-year-old son Daniil was struck off the disability register in October, leaving his family to fend for itself.

Daniil is 5 years old, but he has spent more time in the hospital than many adults.

Last year, he was treated four times at the intensive-care unit of his local hospital in Magnitogorsk, an industrial city in Russia’s Urals region.

Although he relies on a daily cocktail of drugs to survive, Daniil was struck off the disability register in October, leaving his family to fend for itself.

"It was a shock for us, " says his mother, Marina Nizhegorodova. "Now, we have to pay for the tests and the drugs from our own pocket. They took everything away from us."

Daniil is one of hundreds of thousands of patients who were denied disability benefits in 2015 under new measures that health advocates say are hurting many of Russia’s most vulnerable citizens.

Russia’s Ministry of Labor and Social Protection insists that the new measures are based on the German model and aim at perfecting the previous mechanism, which granted disability benefits according to the type of medical condition and the severity of the symptoms.

Under the new system, introduced at the start of 2015, health authorities instead evaluate the loss of a particular function of the body, regardless of the diagnosis or degree of general infirmity.

Only patients deemed to have lost at least 40 percent of one of their body functions can now apply for financial assistance.

The new rules have sparked an outcry among patients and health experts who warn that sufferers are being pushed off benefits in a bid to cut welfare costs.

"A patient’s condition should not worsen, he should not be deprived of social protection just because the control mechanism has changed, " says Sergei Koloskov, a disability-rights advocate and member of Russia’s Public Chamber. "No longer approving people who were previously approved simply because the criteria are different is a profoundly vicious thing to do."

The change has come during a time of persistent economic troubles for Russia, which is reeling from the effects of low world oil prices and Western sanctions over Moscow’s interference in Ukraine -- as well as the Kremlin’s own "countersanctions, " which have restricted imports. The Russian economy shrank by 3.7 percent last year and is expected to decline by another 1 percent this year. Searching for ways to save, the government may cut military spending by 5 percent in 2016.

’Millions For War, None For Sick Children’

Under pressure from patients and disability rights activists, the Labor Ministry eventually relented and issued a new decree softening the rules for patients suffering from specific conditions, including bronchial asthma and Type 1 diabetes, which is usually diagnosed in children and young adults.

But the amended rules, which came into force on February 2 of this year, have failed to soothe patients, who say the criteria for assessing disability remain unchanged.

A petition launched by Daniil’s mother last month has gathered more than 7, 300 signatures.

"Money should be saved on the salaries of officials, not on sick children!" wrote one signatory, Yelena Davydovich from the city of Seversk.

"This is a monstrous government that has no money for sick children but has millions for war, " wrote Tamara Gil of Omsk, in Siberia. "Have mercy on parents who didn’t abandon their children in orphanages."

Russia began a costly campaign of air strikes in war-ravaged Syria in September 2015 and has beefed up its military presence there. Despite growing evidence, President Vladimir Putin and his government deny Russia has sent troops and weapons to support separatists in a war that has killed more than 9, 100 people in eastern Ukraine since April 2014.

In Daniil’s case, health officials ruled that he had lost only 30 percent of function and therefore no longer qualified for his monthly 13, 000-ruble ($180) disability pension.

Nizhegorodova was told that her son needed to have at least five vomiting episodes that led to his hospitalization in an intensive-care unit each year in order to reach the 40 percent threshold that would entitle him to disability benefits.

She says the authorities did not take into account the fits that Daniil’s doctor was able to treat in time at home.

Nizhegorodova is outraged. She says she has no intention of letting her son, who could die within an hour if a vomiting episode is left untreated, get sick enough to score the five mandatory hospitalizations.

"I can’t imagine how I’m supposed to sit and watch my child die, " she protests. "When he has a crisis, he throws up every two or three minutes. After 15 minutes, he’s already thrown up all the bile in his body and he starts vomiting blood. The ambulance may not make it, he may not reach the hospital in time. But no one cares."

Like many relatives of people with disabilities, Nizhegorodova stopped working to care for her son, who needs to be administered four pills a day at a precise time and requires routine tests to check his salt levels.

Daniil must also regularly visit a physician to monitor his condition and obtain prescriptions for the tablets he needs for his survival.

Without his disability benefits, the family has been in dire straits. "In our situation, even 50 rubles ($0.70) means something, " Nizhegorodova says. "But all they care about is reducing the number of disabled people and cutting the budget."

She says Kristina, 17, has suffered from chronic exhaustion, dizziness, and fainting spells since her thyroid gland was removed due to a medical error in 2006.

Authorities ruled that Kristina, who will be on hormonal medication for the rest of her life, was not sick enough to receive disability benefits. She had previously received a monthly pension of 15, 000 rubles ($210).

The decision has dealt a harsh financial blow to Murtazina, a railway carriage inspector, and her husband, a driver, whose combined monthly income is less than $500.

"She needs these pills to live, she takes them every day, every morning, " she says. "But for some reason, she wasn’t approved."

Murtazina also believes that the new disability system’s true purpose is to save money at the expense of Russia’s disabled.

Asked whether she is considering taking the matter to court, she laughs bitterly. "Do you really think that would work?" she says. "I’ve long since stopped believing in this."

Despite the show of support for her petition, Nizhegorodova, too, is slowly losing hope of reclaiming her son’s right to government assistance.

She can’t afford hiring a lawyer and says the Ministry of Labor and Social Protection has asked her to stop sending letters of appeal.

"They are not asking for more; they are asking, in a situation where help is already scarce, not to be deprived of everything, " disability-rights advocate Koloskov says. "This is deeply unfair."