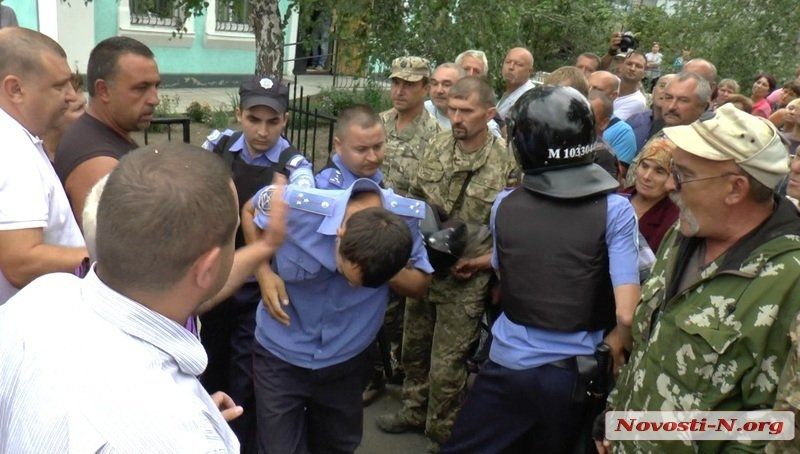 Two of the three police officers facing charges over the death of a 32-year-old man who was beaten and fatally shot while in handcuffs could be released from custody on bail.  The Mykolaiv Oblast Prosecutor’s Office reports that they are now facing less serious charges since it was the shots that killed Oleksandr Tsukerman, not the savage beating he was subjected to.

The press service report states that the driver of the police car is accused of murder under Article 115 § 1 of the criminal code and Article 365 § 3 (abuse of powers by law enforcement officers with grave consequences).  The other two officers had been charged under the same part 3 of Article 365, but that the charges have been changed to the less serious 365 § 2 (abuse of powers with the use of violence).  All three men’s detention was extended to Dec 18, however the two men facing the lesser charges can be freed if they pay 120 thousand UAH bail.

There was public outcry in late August after Oleksandr Tsukerman was killed and concern that there might be a cover-up.  There were promises of a shake-up of the police department in Kryve Ozero (Mykolaiv oblast) and assurances that those responsible would be held to answer.

The promises came after the police initially claimed that Tsukerman had gone for them with a spade in his hand and had needed to be restrained through force and handcuffs, and after a crowd of Kryve Ozero residents gathered to ensure that the police did not get away with the killing.

The police had been called to Tsukerman’s home by his wife who complained that he was drunk and causing trouble.  He had apparently used a spade to smash the back window of a taxi car belonging to a neighbour, though there are varying reasons given as to why.

Witnesses and Tsukerman’s wife and mother were adamant that Tsukerman had got into his own car and had fallen asleep.  They reported that three police officers had arrived, taken him over to their car and begun beating him.  Another three officers then turned up.  By this stage, both Tsukerman himself and his family were pleading with the police to stop.  The police officers continued, despite even the presence of Tsukerman’s 13-year-old son who was obviously distressed.  They called an ambulance only after Tsukerman stopped reacting, with the paramedic immediately saying that Tsukerman was dead.  Novosti-N reported that the police had then fled the scene, leaving their victim’s body to lie there all night.

Six police officers were reported to be suspected of some degree of involvement.  Three had cooperated with the investigators, but were reported on August 26 to have been suspended from duty.

A forensic examination soon established that the immediate cause of death had not been the beating, but four shots at close range, including to the heart, from a shot gun.

All three men are in theory facing serious sentences, with even the reduced charges carrying a sentence of up to 8 years’ imprisonment.  Whether they receive harsh sentences remains to be seen.

No other charges are mentioned, although there are witnesses who confirm that three officers savagely beat a man who was in handcuffs and could not possibly have posed a danger or shown any serious resistance.