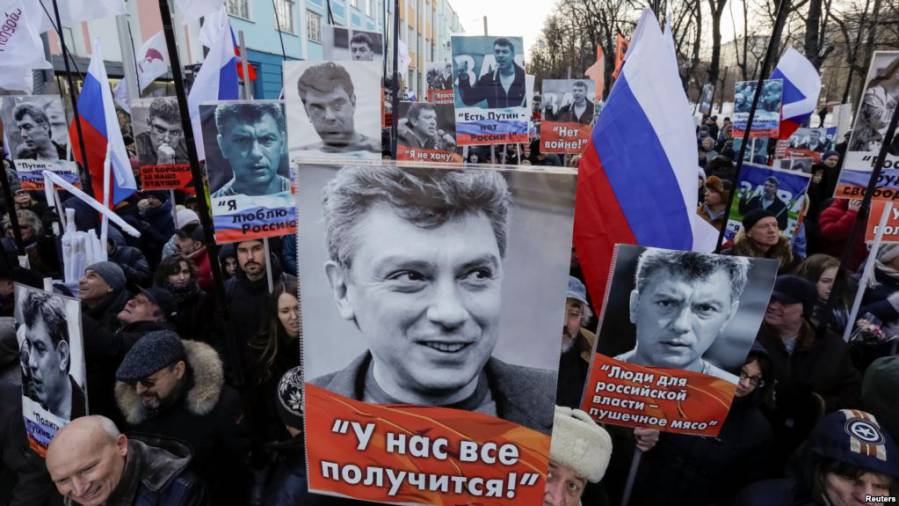 Five men from Russian’s volatile North Caucasus region of Chechnya went on trial for the killing in October. They have denied the charges. Nemtsov’s supporters fear that whoever ordered his murder will never be brought to justice.

Thousands of people gathered at Pushkin Square in central Moscow on February 26 before marching to Prospekt Sakharov. The march, authorized by municipal authorities, ended at around 4 p.m. local time without any major incidents. Two previous marches to honor Nemtsov were also held without any incidents.

Similar marches to commemorate Nemtsov were organized in cities across Russia, including in St. Petersburg and Nemtsov’s hometown of Nizhny Novgorod.

Protesters in Moscow filed through metal detectors manned by dozens of police, who were stationed along the march route.

Demonstrators held the Russian national flag and other flags bearing the logo of opposition party PARNAS and the Solidarity movement.

Scores of demonstrators held portraits of Nemtsov bearing slogans like "The war with Ukraine is Putin’s crime" and "Strength lies in truth and the truth is with us" and "Our advantage over the authorities is our honesty."

"The situation in Russia has got to a point where we have to change something, including changing the authorities," said Yuri Kalina, a teacher who attended the march. "One person has ruled for the last 15 years. This is not normal and it is not democratic."

"Everything starts [on] the street," added the 25-year-old. "When we don’t have the opportunity to speak on television and when there is no one with alternative views on radio, we have to start [on] the street."

Yuri Konstantinov, 63, a pensioner from Moscow, said he attended the march out of a sense of civic duty, but was skeptical about whether it would have a positive impact for the opposition.

"I don’t see any particular reason for hope," he said. "But a person has a duty to stand up for his beliefs. I believe a person has a duty. I don’t know what will come of it though. The whole world seems to be going in the wrong direction."

Ibragim Osmanov, 59, said he traveled to Moscow from Ukraine’s Crimean Peninsula to attend the march.

He stood in a small group of 10 holding Crimean Tatar flags. The group held a meters-long banner reading: "Stop the repressions in Crimea. Freedom to Ukrainian political prisoners."

"He [Nemtsov] always supported the Crimean Tatar people," said Osmanov. "We’ve come here to pay our tribute to his memory."

Demonstrators chanted "freedom to political prisoners!" "Russia without Putin" and "Putin is war!"

Activists at the rally collected signatures to petition Moscow city hall to establish a memorial plaque in tribute to Nemtsov.

Supporters also hope to petition city authorities to launch a probe into what they cast as the "illegal" clearing away of the makeshift unofficial memorial at the site of Nemtsov’s murder.

"This is a serious date. The date of a murder," said Galina, a 66-year old pensioner from Moscow who declined to give her surname. "This was the political murder of a leader. We all remember. It is a pity there are few people like him."