Poland’s rightwing government plans sweeping powers for own party Prosecutor GeneralPoland’s new right-wing government takes a hatchet to rule of law & democracyUkrainians block "deliveries of death" from Poland to Belarus and Russia, demanding the EU stops trading with killersRussia calls Soviet invasion of Poland in 1939 a ‘march of liberation’ Comparing Stalin to Hitler could soon get you prosecuted in Russia, saying they both invaded Poland already hasPoliticized Polish judicial body illegally rubberstamps unfair presidential electionsPoland’s PiS government pushes through illegal elections by post to retain power amid Covid-19 pandemicEU silent while Poland seeks criminal prosecution of judge defending independent judiciaryDictatorship law that could force Poland out of the EU brings thousands out in protestPoland’s Government uses ‘Public TV’ as a propaganda tool to win the elections. Will the EU react?The Facts about Anti-Semitism in Ukraine that Russia doesn’t want knownPoland charges three with terrorism & sees Russian link in arson attack on Hungarian Centre in UkraineUkrainian Open Dialogue activist deported from Poland after criticizing right-wing governmentPoland’s Government deals death blow to independent judiciary. Free elections the next target if EU doesn’t act nowRussian prosecuted for posting that USSR invaded Poland in 1939 denied asylum in Czech RepublicVaad of Ukraine Statement in Response to US Congressmen Letter Concerning Anti-Semitism in Poland and UkraineMenacing attack on Independent Polish TV channel as ruling party set to gain control over judiciaryPoland’s right-wing government poised to seize more control of the judiciary than Yanukovych achieved in UkraineE-Mail Hack Gives Glimpse Into Russia’s Influence Drive In Eastern EuropeBlogger fined for saying the USSR invaded Poland in 1939 takes Russia to Court in Strasbourg
• Topics / Politics and human rights 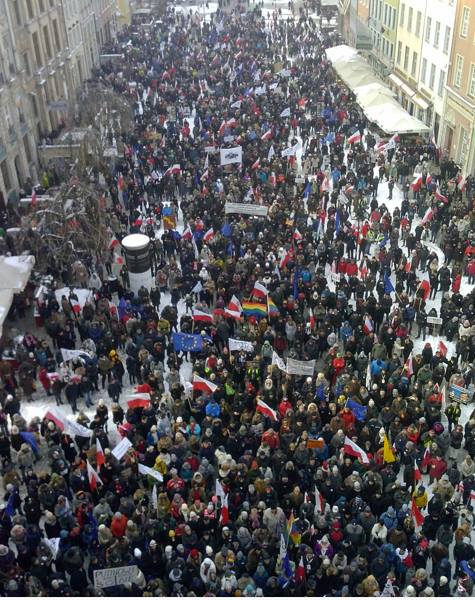 One of the numerous protests throughout Poland over the effective stifling of the country's Constitutional Tribunal (Gdańsk, 23.01.2016)

Amnesty International, Human Rights Watch, Open Society European Policy Institute, FIDH and Reporters without Borders, as well as more than 20 non-governmental organizations from Poland, including the Helsinki Foundation for Human Rights, have signed an open letter requesting the European Commission to launch the third stage of the rule of law procedure, which would mean the triggering of the measures under Article 7 of Treaty of the European Union.

Under Article 7, the Council of the European Union, acting on a proposal from, for example, the European Commission, may determine, by a four-fifths majority of member states, that there is a clear risk of a serious breach by a member state of the fundamental values of the EU, including the rule of law.

Article 7 also provides that the European Council, acting by unanimity on a proposal by the European Commission, may determine the existence of a "serious and persistent" breach by a member state of fundamental values of the EU. Only after this step is completed, the Member States, acting by a qualified majority, may decide to suspend a given state’s rights deriving from the treaties governing the functioning of the EU.

Systemic threat to rule of law

Before the end of February, Poland should notify the European Commission of measures taken in order to comply with the Commission’s recommendations. So far, no such recommendations have followed.

The open letter’s signatories believe that "a recommendation from the Commission to activate Article 7 TEU is at this stage the only way to continue to hold Poland to account for its failure to respect its obligations under the Treaties." The NGOs also emphasize that it "would send a strong signal to other Member States" that no one can undermine the founding values of the European Union without a strong response from the EU.

The signing organizations also note that using the Article 7 procedure will send “a strong signal to civil society in Poland that the Commission stands by its side in its fight for a society in which democracy, the rule of law, human rights and the other values protected under Article 2 TEU are upheld."

The open letter to the European Commission may be read here.