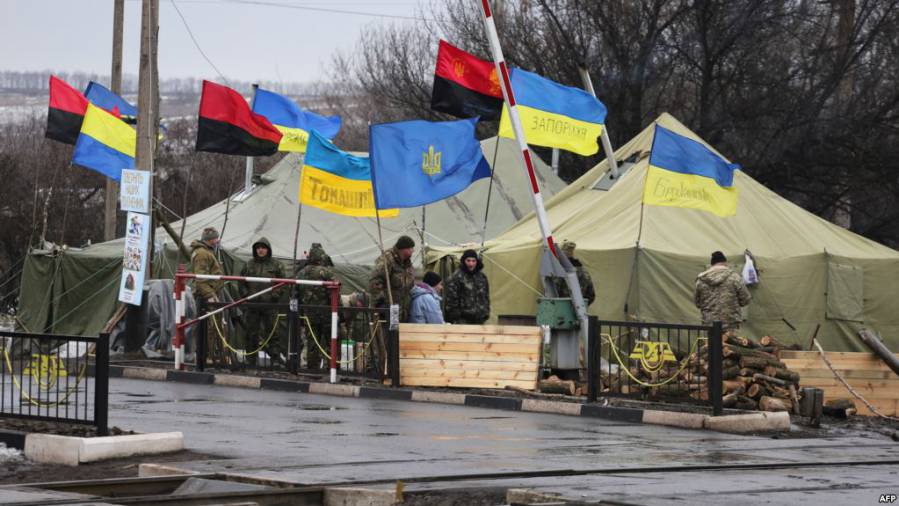 KYIV -- The grainy, livestreamed video shot on a smartphone from an eastern Ukrainian redoubt shows a ragtag group of a dozen or so middle-aged men in fatigues huddled around a steaming pot of something resembling soup.

"Tell us, who’s sponsoring this meal?" a voice off camera asks the cook, rattling off the names of Russia’s president and Ukrainian oligarchs seen as critical of Kyiv.

"It’s people who want to help our movement," counters the cook, "and who support Ukraine."

But the truth is, no one really seems to know.

So tensions continue to rise in eastern Ukraine as the frequently armed activists ratchet up their makeshift blockade to divide separatist-controlled territory from the rest of the country nearly three years after the onset of violence.

And more than a month into their campaign, the "blockaders" -- on the surface, a motley crew of staunchly pro-Kyiv activists and military veterans, some armed -- have shown no signs of backing down. They are installing new barriers and checkpoints on an almost weekly basis that slow traffic and interrupt the flow of goods across the front line of a conflict that has killed at least 9,750 people.

They are demanding that Kyiv stop a perceived "trade in blood" that helps the breakaway groups finance their self-proclaimed "people’s republics" in the Donetsk and Luhansk regions. Doing so, they argue, could force cash-strapped Moscow to foot a heavier bill to sustain its alleged intervention in those places and ease the burden on Kyiv at the same time.

The Ukrainian government opposes the blockaders’ stand, but law enforcement and the military are hesitant to disperse them by force and risk images of the authorities beating on military heroes. The result is a standstill in nearly all rail traffic and crucial shipments of coal to fuel power plants and heavy industry across the country, which despite the warring sides’ differences had continued almost unimpeded until early this year.

Already the blockade has led to the Ukrainian energy system being placed under a state of emergency.

In at least one case, it has spurred a bloody brawl. On February 28, a group of club- and chainsaw-wielding men attacked the blockaders, leaving one of them hospitalized with a broken leg. Dozens were arrested. The blockaders believe they were goons hired by the coal industry to disperse them.

And on March 3, the month-old blockade was met with a pledge in kind by the Russia-backed side. Donetsk separatist leader Aleksandr Zakharchenko, whose fighters already issue dubious "passports" and are trying to convert to the Russian ruble, vowed to "cut all ties with Ukraine."

Details are murky. But some activists, experts, and government officials see the hands of oligarchs -- some regarded as pro-Russian and others who have personal and professional beefs with the authorities -- in the blockade. They range from an ally of ousted pro-Russian ex-President Viktor Yanukovych to wealthy businessmen who have butted heads with the government that came to power amid the Euromaidan pro-Western unrest in 2014. Still others suspect Moscow and an increasingly assertive President Vladimir Putin.

But there is no proverbial smoking gun.

Timothy Ash, a London-based economist who follows emerging Europe, warned after a recent visit to Kyiv that the blockade was "beginning to suit many different interests and is developing a dynamic of its own which may be hard to stop."

"There may also be some oligarchic point settling under way in all of this as well," Ash said, "which adds its own dynamic which may not always be that easy to read."

What is known is that volunteers are receiving some donations from supportive citizens around Ukraine via electronic deposit. In a phone interview with RFE/RL on March 3, Semenchenko insisted the blockade movement was purely grassroots and operating on a shoestring: "The guys are living in tents."

The blockaders have a virtual command center with more than 25,000 followers where they solicit contributions, advertise bank-transfer information, and publish video dispatches from their strongholds.

Semenchenko’s livestreamed videos, like the interview with the cook, are most often shared there. In several of the videos, men tell Semenchenko they were compelled to join the blockade effort by their own belief that separatist-controlled swaths should be cut off from the rest of Ukraine.

The government has publicly opposed the blockade, and warned of the economic and financial consequences of it -- replacement coal, possibly from Russia, could be expensive and tens of thousands of jobs could be lost.

But some officials in Kyiv have signaled support for such ring-fencing.

In December, National Security and Defense Council Secretary Oleksandr Turchynov urged a complete cutoff of the separatist-held areas of Donetsk and Luhansk from the rest of Ukraine. Turchynov, a wartime acting president in 2014, later clarified that no such steps should be taken without the approval of the current president, Petro Poroshenko.

Shortly afterward, veterans set up the first blockades, stopping trains crisscrossing the front line, erecting tent camps atop the tracks, and in some places welding wagon wheels to them.

Today, they sit defiantly inside pop-up encampments surrounded by razor wire. They say they won’t move until their demands are met.

"When the head of the government forbids, by law, any trade transactions with the enemy, when all [Ukrainian] prisoners are released, and when the occupied territories are, by law, named as ’occupied’ -- only then will the blockade be lifted," Semenchenko said.

"There will be no compromise."