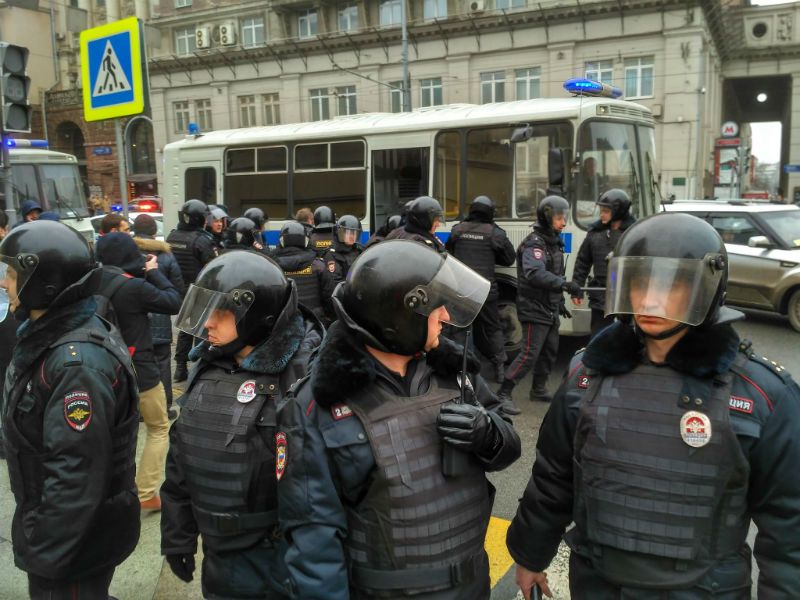 The arrests come a week after more than 1,000 were arrested during a demonstration organized by leading Kremlin critic and anticorruption activist Aleksei Navalny.

"The first detained was a young man with a copy of the constitution in his hand, then a man with a Russian flag," the website OVD-Info, which tracks police actions against protesters in Russia, said.

In a separate incident, activist Ildar Dadin was arrested as he picketed alone outside an Interior Ministry building in Moscow, the TASS news agency reported, quoting Dadin's lawyer, Ksenia Kostromina. She gave no further details.

Dadin was convicted and sentenced to prison in December 2015 under a controversial law that criminalizes participation in more than one unsanctioned protest in a 180-day period.

He was released on February 26 after the Supreme Court threw out his conviction and ordered the case closed.

Dadin, the only person in Russia who has been convicted under the law, was considered a political prisoner by major human rights groups.

Navalny, who is currently serving a 15-day sentence behind bars for disobeying police at last week’s rally, has distanced himself from the latest protest.

"He knows absolutely nothing about this," his spokeswoman, Kira Yarmysh, wrote on Twitter.

The March 26 protests, which brought tens of thousands of people into the streets in dozens of Russian cities, were the largest antigovernment protests in the country in the last five years.

The Russian government said on April 1 that it has opened a criminal investigation against the unidentified people who had called for the April 2 unsanctioned anticorruption demonstration in the capital.

The government had reportedly blocked access to a number of Internet pages calling for the protests.

With reporting by RFE/RL’s Russian Service, AFP, and TASS