Russian state TV in absurd denial over thousand-strong protests, mass arrestsThink of the children: Russian officials fret over youthful protestersRights Groups Says Police Detain 59 At Opposition Protest In MoscowNew Kids on the Block: A Younger Generation Invigorates Anti-Kremlin ProtestsIzium Mass Graves: Tortured victims with bound hands and entire families killed by the Russian invaders Valentin Vyhivsky: Eight years of torture in Russian captivity for being Ukrainian Mass burial site at Izium, imprisoned teenagers and other Russian war crimes in Kharkiv oblast Vovchansk Engineering Works: Dungeons on the Chechen ModelFascism is here in Russia. Anti-war activities in Russia, 15-22 AugustAdmission of guilt: Russia blocks international investigation of Olenivka mass killing of Ukrainian POWs Abducted Crimean Tatar sentenced to five years in Russian-occupied Crimea on insane charges Those who unleashed this war will not go to Heaven. Anti-War activities In Russia, 7-14 August 2022Opposing the Orwellian State. Anti-war activities in Russia, 27 July-5 AugustRussia razes Ukrainian city to the ground and says ‘there’s no point’ to rebuilding it Russia invites Steven Seagal, while blocking the Red Cross from visiting Olenivka prison after killing of 53 Ukrainian prisoners of war“He lay on the sidewalk, naming towns and cities in Ukraine”. A digest of anti-war activities in Russia, 23-29 JulyDirector of Amnesty International in Ukraine resigns in protest calling controversial Amnesty press release "a tool of Russian propaganda’ Retired Ukrainian naval commander abducted, tortured and taken to Russian-occupied Crimea ‘for trial’Russian FSB threaten and beat imprisoned Crimean journalist and human rights defender Iryna Danilovych‘I don’t want to see them in the dock. I want to see them dead,’ a man from the Mariupol Drama Theatre says
• Topics / News from the CIS countries 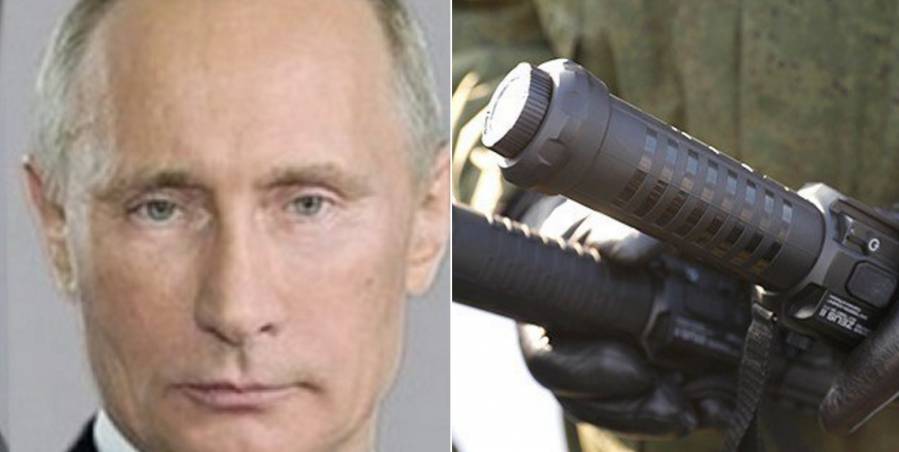 Members of the new National Guard which the Kremlin has acknowledged may be used against ‘unauthorized mass protests’ are to be armed with electric-shock batons with a range of 5 metres and stun grenades.  The formation, generally referred to as Rosgvardiya, was created by presidential decree in April 2016, and was from the outset widely viewed as President Vladimir Putin’s own “personal army” aimed at quelling unrest.

One of the main reasons for mounting disgruntlement among the population is the economic situation which can only deteriorate as Russia continues to exhaust its reserves.  Instead of dealing with urgent problems in the country, the Kremlin has taken on huge expense through its military aggression in Ukraine and its involvement in Syria, and is now arming a personal guard with highly sophisticated weapons which can and almost certainly will be applied against demonstrators.

According to the Izvestia report on Jan 23, 2017, the new ZEUS electric-shock batons will be equipped with torches, laser detectors and stun grenades.  The batons will be able to fire electric shocks with a range of 5 metres.

The report asserts that there is nothing like these batons, produced by a Russian company OBERON anywhere in the world.  The baton is presented as part of the equipment for Rosgvardiya soldiers “carrying out tasks patrolling and detaining infringers of public order”.

In December 2016, Sergei Melikov, the First Deputy Commander of Rosgvardiya announced that the army’s ‘intelligence unit’ would be deployed “in uncovering threats to the state system in Russia”.  “Sources of extremism may be not only behaviour linked with intolerance of this or that action by the state, but also inter-faith or inter-ethnic enmity, etc.”  Melikov asserts that these “can be used to create the conditions which would result in an undermining of the state system”.  He promises that the service will “prevent any actions which can lead to mass disturbances”.

It was initially announced that the National Guard would protect public order, fight terrorism and extremism and guard state buildings.  It later transpired that it would also be involved in taking fingerprints and something referred to as “information counter-resistance”.  The term is as dangerous loose as ‘extremism’ and ‘infringing public order’.

Putin’s Press Secretary Dmitry Peskov made it clear back in April 2016 that these fighters could be deployed against “unauthorized mass protests”.  In breach of Russia’s Constitution, the authorities regularly refuse to ‘authorize’ planned peaceful demonstrations and the Rosgvardiya will clearly to used to disperse those still brave enough to come out in protest against repression or against socio-economic protests.

In fact, the batons are less lethal than other possibilities envisaged by the bill which gave Rosgvardya fighters the right to “not warn of their intention to use physical force, special means or firearms if delay in using them could create a direct threat to the life and health of a member of the public or National Guard soldier or could cause other grave consequences”.

There were some restrictions, such as a ban on using special means (tear gas, etc.)  against women who are obviously pregnant, people who are disabled or children.  The ban was supposed to also apply in the case of a large group of individuals if somebody else just there by chance could be hurt.  It could, however, be waived “in cases of armed resistance, of a group or other attacks threatening the life and health of members of the public or National Guard soldiers”.

Judging by the totally peaceful protests that have been treated as ‘mass riots’, it would be difficult to feel confidence about the real level of danger to be required before shots were fired. Or now, before electric shocks are applied.

Russian security specialist Mark Galleotti responded to the news of Putin’s decree in April 2016 by asking what it says when  Putin needs his own personal army.  You don’t need to create a National Guard out of the Interior Troops, he added, unless you have serious concern about public unrest.

Many Russians dubbed the new formation Putin’s Oprichnina after the dreaded ‘police’ used under Ivan the Terrible.  Typically, it is headed by Viktor Zolotov, who was in charge of Putin’s own security guard [FSO] from 2000 to 2013.  Zolotov then went on to become the head of the Interior Forces who have long had at least some of the repressive powers given the Rosgvardiya.

Zolotov is also an ally of Ramzan Kadyrov who is reported to have a personal army of up to 30 thousand men.  It was assumed that Putin was trying something similar.  Galleotti saw the presence of Zolotov as significant, saying that this made the Rosgvardiya “even more clearly a personal, presidential Praetorian force, under a maximalist loyalist. This may not only be a force to keep the masses in check, but also the elite.”

The same view was held by a number of other specialists.  Mark Simakovsky, a senior fellow at the Atlantic Council saw the move as linked both with parliamentary elections and with the 2018 presidential elections in which Putin is likely to seek his fourth term in office.  Putin was clearly trying to ensure that all domestic dissent was suppressed rapidly.

Abuse of legislation on ‘extremism’, ‘terrorism’ and freedom of peaceful assembly is a major problem and source of unwarranted arrests in Russian-occupied Crimea, and there is every reason to fear that Rosgvardiya units will be deployed against Ukrainians in Crimea.