Ukrainians who fled Putin face new pandemic realitiesUkraine’s MPs leave Donbas pensioners to keep dying for their pensionsExtraordinary Ukrainian collaboration with Russia against Crimeans forced to flee their homesUncomfortable human rights questions silenced on anniversary of Russia’s annexation of CrimeaWhy are Ukrainian pensioners from Donbas forced to fight or die for their pensions?Vital rulings could end humiliating discrimination against Ukrainians displaced by Russian aggressionLack of jobs, money for rent, add to woes in conflict-affected eastern Ukraine, says UN agencyInterior Minister accused of hate speech against those forced to flee DonbasBemused anger as Poroshenko vetoes vital law for people forced to flee their homesCrimean’s right to vote in local elections recognized, 1.5 million others disenfranchisedWhy must Ukrainians fight for their right to vote?Displaced by Russian aggression, now stripped of right to voteOver 1.3 million people forced from Donbas and Crimea need a decent lawNew government ruling makes life for displaced people even harderLaw on Internally Displaced Persons finally passed into LawDonbas Ukrainians feel betrayedPresident and authorities make life even harder for displaced peopleThousand Ukrainians leave fighting zone in the last 24 hoursFinally! Law on Displaced Persons adoptedDisplaced and disregarded
• Topics / Politics and human rights 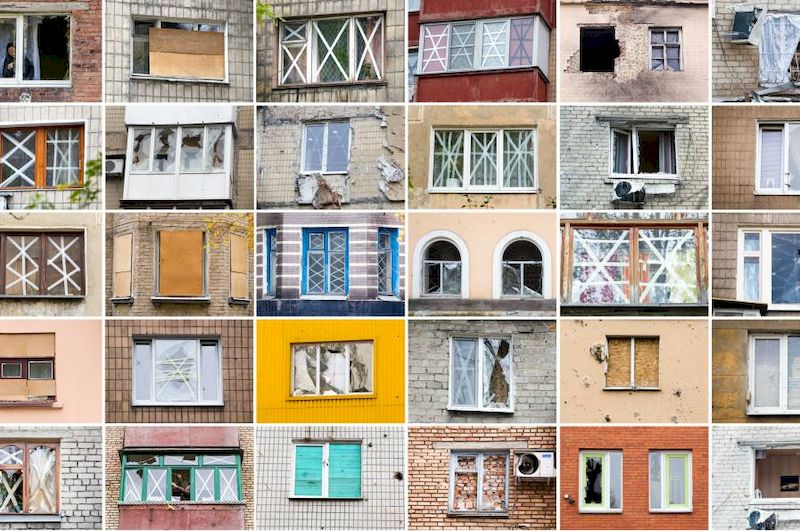 A combination photograph of windows of homes destroyed after shelling in Ukraine’s Donbas region during the month of October, 2014. REUTERS/Shamil Zhumatov

Ukraine’s internally displaced persons (IDPs) have struggled. After having fled their houses due to military conflict and living with the uncertainty of whether they will ever regain that property, some have been poorly regarded in their new host communities. How the displaced were received often depended on where they came from. In general Ukrainians have been more supportive of Crimean IDPs, victims of Russia’s annexation, than IDPs from Donbas, who were sometimes equated with compatriots who supported Russia’s invasion.

But several events in the last few months have shifted the terrain for Ukraine’s IDPs in positive ways, providing new avenues for political and legal justice for Ukraine’s 1.6 million IDPs. The European Court of Human Rights this year found Russia guilty of human rights violations committed by Transnistrian authorities, and hinted, in a similar suit brought by a citizen of Luhansk, that it would have decided for the plaintiff if he had named Russia and not Ukraine as the human rights violator. If the ECHR follows precedent, it’s likely the court will hold Moscow accountable in the 3,500 cases brought by Ukrainians for illegal detention, confiscation of property, and shelling by Russia’s LHR and DHR proxies.

Additionally, in early October, the Rada passed two laws supported by President Petro Poroshenko’s administration that establish a new framework for the conflict; they name Russia as an aggressor and occupying force while also asserting Ukraine’s sovereignty over the Donbas. With this new framing of the conflict, Donbas IDPs, like those from Crimea, can be viewed as war victims with rights under national and international law. Ukrainian law 7163 stipulates that the conflict’s internally displaced retain legal ownership of their properties in the occupied territories. Designed to articulate presidential power in prosecuting the war in the east, the laws also lay out a political path forward that, until now, had been stymied by the Minsk agreement’s prioritization of security first.

To implement these laws, the Ukraine government and the international community must build a public database where IDPs can register their lost property, using geospatial imagery for proper identification. The use of a database tips the balance of the displaced from victims to advocates. It protects property rights in perpetuity for children and grandchildren, giving IDPs a sense of restoration and agency, despite the sad reality that they may never see their homes again. Making the database publicly accessible discourages others from claiming IDP-owned homes and selling them, and allows the displaced to use their homes as collateral to acquire loans and financing. It also establishes an evidentiary base for IDPs to pursue compensation and restitution from Russia in the ECHR, which, even if ignored by Moscow, sends a clear message that this is Ukrainian land.

In 2006, the government of Georgia implemented a similar initiative, the My House program, for persons displaced by the South Ossetia and Abkhazia conflicts of 1990-1993; it was modified in 2011 following the 2008 Russia-Georgia War. Internationally, property redress generally occurs after a negotiated peace settlement, in the so-called “post-conflict” phase. The Georgia case demonstrates the importance of establishing a system in the midst of fighting, as a continued conflict often destroys housing and physical landmarks, making property claims extremely difficult over time. In Georgia’s case, establishing such a system also imparted an important political and symbolic message that Tbilisi was not surrendering its claim to the Russian-occupied territories.

What can we learn from Georgia’s program? That initiative incorporated a two-phase process with a separate ministry in charge of each phase. Georgia’s Ministry of Refugees and Accommodation worked with IDPs to identify their properties; then the Ministry of Justice issued the preliminary registration once the claim was validated. (The properties would be officially registered only once the territories were restored to Georgian control; IDPs could not transfer the property in the interim.) The first lesson of that experience is that any registration process should be overseen by one ministry as, in the Georgian case, different ministerial processes complicated the registrations.

One of the most successful aspects of the program was using satellite images. Claimants could more easily identify their properties, some which were severely damaged, using landmarks, or after neighbors had tagged theirs. The ministry would then reference these satellite images in the land titles. Furthermore, based on Georgia’s experience, any property registration system must incorporate procedures for displaced people with no documentation; these might include statements by neighbors or community leaders. The process should also provide an adjudication process for resolving possible disputes. Finally, such a system should also have a process for hearing cases in which IDPs transferred their properties under duress, and policies for remediation.

Creating such a database for Ukraine’s internally displaced persons would advance the country’s higher political goals, helping to preserve Ukrainian sovereignty and law over the occupied territories. It would also advance the political and civil side of a peace process currently stalled due to the military stalemate and Minsk’s security-first provisions. And most important, it would aid the 1.6 million people whose lives currently hover in uncertainty. It should be a priority project for the Ukrainian government, and for members of the international community that support a strong, empowered Ukraine.

Lauren Van Metre is a professor at George Washington University’s Elliott School of International Affairs and has supported peace processes in the Balkans and Eastern Europe while at the State Department, Department of Defense, and the US Institute of Peace. She tweets @resilienceworks.