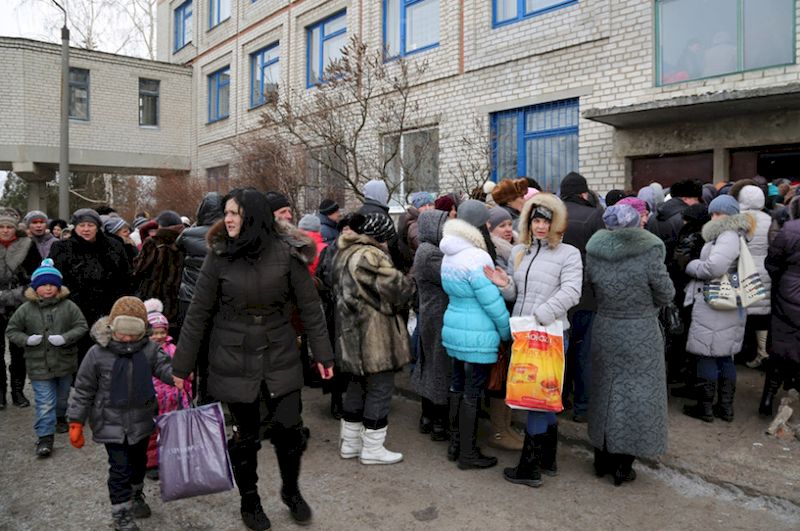 Displaced families and the elderly in Ukraine line up for WFP food vouchers, which enable them to obtain food including milk, fresh fruit, vegetables, eggs and meat. Photo: WFP/Abeer Etefa

29 November 2017 – As temperatures plummet across eastern Ukraine, many – including the elderly – who fled their homes following hostilities are forced to return to their original place of residence due to lack of jobs and money to pay rent in the places they were sheltering, the United Nations migration agency has reported.

According to a survey conducted by the UN International Organization for Migration (IOM), about 70 per cent of the returnees said that they were going back to their homes because they do not have to pay rent there as have to elsewhere.

“Over half of the internally displaced persons (IDPs) returning are over the age of 60, and most are pensioners,” said IOM in a news release Tuesday, announcing the findings.

“This heightens their vulnerability as the pension is linked to their [displaced] status and residence in the government-controlled area.”

Almost two-thirds of those surveyed also reported that their income only covers their food needs. The average monthly income per IDP-household member (about $87) in the non-government-controlled areas is well below the subsistence level (about $113) calculated by the Ministry of Social Policy.

Overall, 16 per cent of respondents surveyed in the latest round, in September, stated they returned to their original place of residence, a three per cent increase on the previous round.

Further complicating the matters is the difficulty for relief actors to reach many parts of the affected region.

“Access to deliver humanitarian aid […] remains of paramount importance to ensure that support is provided to the most vulnerable individuals throughout eastern Ukraine,” said Thomas Lothar Weiss, the head of IOM operations in Ukraine, on a visit the eastern region last week.

“We intend to keep up [the assistance] during the difficult winter months, especially to vulnerable populations near the contact line between the Government and non-government-controlled areas,” he added.

Since the outbreak of conflict in 2015, IOM has provided assistance to nearly 200,000 internally displaced persons and conflict-affected people.

The UN agency has also been conducting surveys on the situation of IDPs in Ukraine on a regular basis since March 2016. In the latest round, some 1,025 IDPs were interviewed in person and more than four thousand were interviewed by phone across the country.