Donbas reintegration law poses human rights risks & doesn’t help hold Russia to accountUkraine washes its hands of civilian victims of Russian-sponsored war in Donbas13-year sentence against Belarusian investigative journalist who helped expose crimes against Ukraine Russia sends forcibly mobilized Ukrainians from occupied Donbas to die as ‘live bait’ at the frontlineUkrainian "refugees" in Russia forced to give "testimony" blaming Ukraine for Russian war crimes Russian invaders use Mariupol supermarket to dump the bodies of their victims Crucial law adopted to help Russia’s Ukrainian political prisoners and hostages400 Ukrainians imprisoned without a crime in Russia, occupied Crimea and Donbas Ex-Berkut officer on trial for Maidan killings reinstated in Ukraine’s police forceFirst Berkut police jailed for involvement in savage dispersal of Maidan activists There are signs of usurpation of power: a statement by human rights organizations regarding sanctions against Ukrainian citizensCrucial victory for Ukraine in ECHR case against Russia over Crimea Ukrainians forced to take Russian citizenship, or lose their homes in occupied Crimea Ukraine sabotages reintegration chances for students from occupied Crimea and DonbasAccountability for international crimes committed in Ukraine between 2014–2018Ukraine ordered to pay compensation to Russian activist it helped Russia abduct and jailUkrainian political prisoner tortured into confessing to fictitious ‘war crimes’ returned from Russia to prison in UkraineRussia ordered to pay Ukrainian journalist forced to flee Crimea huge damagesUkraine will only help Russia by stripping Donbas residents who take Russian citizenship of their pensionsWhere Ukraine’s presidential candidates Poroshenko and Zelensky (don’t) stand on Crimea and Donbas
• Topics / Terrorism
• Topics / Social and economic rights 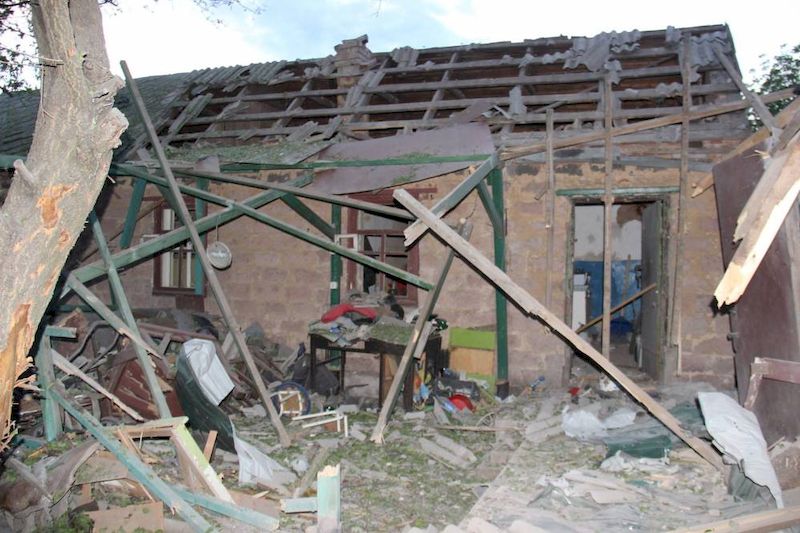 Through the so-called ‘reintegration law’ recently adopted, Ukraine’s leaders have effectively distanced themselves from the urgent need to compensate people in Donbas whose homes have been destroyed.  Russia may well bear full moral and financial liability for the devastation caused in Donbas, and the fact that so many Crimeans were forced to leave their homes, but the chances of forcing it to provide compensation are next to nil, and Ukrainian citizens need help now.

The Ukrainian Helsinki Human Rights Union [UHHRU] has long been helping people seek compensation through the courts.  Up till now, the situation on paper was straightforward, since the Law on Fighting Terrorism does envisage that compensation is first obtained from the State which can then try to retrieve the costs from the real culprits.

In fact, there was never any mechanism envisaged for carrying this out, and for the moment, even those ‘internally displaced persons’ [IDP] who win court cases over their right to compensation from the State are still very far from receiving any money.  According to Oleh Shynkarenko from UHHRU, it has long been the case that such rulings are challenged through the court of appeal, and then at cassation level, with the case often sent back for a second examination at first-court stage.

In one case which UHHRU is involved in, an original ruling awarding pensioners from near Donetsk considerable compensation for the destruction of their home was even upheld at appeal level.  Then the authorities lodged four cassation appeals.  They claimed that it had not been proven that the residence had been destroyed, though the circumstances of its destruction were well-known.  Another argument was that the valuation could not be considered satisfactory since a valuer had not gone to the property,  The argument is immensely cynical since the building is in an area where any valuer would be putting his or her life in danger, but it is also invalid.  UHHRU lawyer Yulia Naumenko explains that there has been clarification from the State Property Fund, stating that a visit is not required if there are photographs, and the property is within the military conflict zone.  The cassation court has now stopped the money being paid out. Objections have been lodged, but all of this takes a very long time.

Naumenko notes that the Bailiffs’ Service told the court that there is no specific allocation in the State Budget for paying such compensation.

This was hopefully not the reason for Article 2 of the recently adopted ‘reintegration bill which states that “Liability for the moral and material damage inflicted on Ukraine and its citizens falls upon the Russian Federation”.

Nobody is seriously disputing Russia’s major military and financial involvement in the conflict, but since Moscow is denying its undeclared war against Ukraine, any confirmation of liability will need to come from the international courts at the Hague or from the European Court of Human Rights.  This is a vital task, but will take a long time.

Ukrainian human rights activists fear that the new law will mean that Ukrainians are supposed to demand compensation directly from Russia, and will in practice simply remain without compensation.  Furthermore, the fact that the Ukrainian authorities are refusing to provide compensation will make it impossible to later bring the relevant demands against Russia.

These complications have led UHHR to work together with the Human Rights Ombudsperson’s Office and other civic organizations at drawing up a policy for protecting human rights during armed conflict and afterwards.  They will then seek to persuade MPs to adopt the relevant legislation.

A particularly problematical area has been situations where property has been confiscated for use by the Ukrainian Armed Force, as positions for firing from.  The above-mentioned pensioners’ home was initially hit by shelling, but was then commandeered by the Ukrainian Army as a firing point.   The problem here is that the Defence Ministry does not provide any formal acts or other documentation confirming the mobilization of the property.

In the present situation where the authorities are refusing to resolve the issue of compensation, the UHHRU lawyers have lodged reports of a crime with both Ukraine’s SBU [security service] and with the Russian Federation’s Investigative Committee since Russia is a party to the conflict and should bear liability.  They have also lodged applications with the European Court of Human Rights.

One extra hurdle for people who have effectively lost everything is that there is currently court duty demanded on any such legal suits.  This is 1% of the amount sought which will obviously be a large amount of money where compensation is demanded for property.  UHHRU always ask for the claimants to have this court duty waived since they are the victims of a crime.