With Axes And Hammers, Far-Right Vigilantes Destroy Another Roma Camp In Kyiv 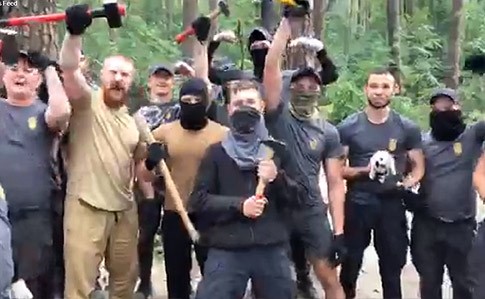 The attack marks the second such incident by far-right vigilantes in Kyiv and the fourth in Ukraine in the past six weeks.

The National Druzhyna, a militia formed in January by veterans of the far-right Azov Battalion, had visited the camp earlier in the day and spoken threateningly with a woman who lived there, an encounter that was filmed by the group and published on its Facebook page.

The militia also issued an ultimatum in the Facebook post for the Roma to clear out within 24 hours or be forced out by a "mob."

"When the police don’t act, the National Druzhyna takes control of the situation," the militia wrote.

But the militia didn’t wait. Hours later, what appeared to be around two dozen nationalists returned to destroy the camp and harass the few Romany women still there.

The attack was broadcast live on the militia’s Facebook page.

That video, which has since been removed, shows the National Druzhyna members in T-shirts adorned with the group’s insignia hacking at the camp’s makeshift homes with axes and hammers.

A more complete, 12-minute clip of the nationalists’ raid was eventually uploaded to YouTube by EuroMaydan, a political group born from the 2013-14 uprising of the same name.

At one point, the militia members mock a woman and child fleeing with their belongings, asking if they planned to eat a nearby dog. "I heard you eat dogs," one of the men says. Later, another belittles a woman trying to collect belongings from the debris by suggesting her actions might be acceptable "in India, but not here."

Near the end of the video, uniformed Ukrainian police officers appear and casually make conversation as the nationalists wind up their raid.

With police looking on, more than a dozen of the vigilantes pose together to a cry of "Glory to the nation! Death to enemies!"

Kyiv police spokeswoman Oksana Blyshchik told Hromadske TV the Romany group had already fled the camp when militia members arrived, which the video clearly contradicts. She added that no one had been injured and nobody had been detained.

Late on June 7, Ukraine’s National Police said in a statement that it had begun criminal proceedings in what it labeled a case of "hooliganism."

"All active participants in this event will be identified and brought to justice," the National Police said.

The Holosiyivskiy camp attack follows three others within the past month and a half.

In May, right-wing thugs attacked a Romany camp in western Ternopil. That followed the burning of one in the nearby village of Rudne in the Lviv region.

In April, members of the right-wing extremist group C14 chased a group of Roma from their camp at Lysa Hora nature reserve in Kyiv. Masked attackers hurled stones and sprayed gas as they chased terrified Romany men, women, and children from the makeshift settlement.

This Roma camp was burned down in Kyiv in April.

Police did nothing until a video of the attack went viral online, forcing them to open an investigation, the results of which remain unclear.

Human rights groups have condemned the attacks and demanded that the authorities investigate them. They say some of the Romany families have been left homeless from the raids.

In its May Nations In Transit report, Freedom House warned of the threat to Ukrainian democracy posed by far-right extremism. "They are a real physical threat to left-wing, feminist, liberal, and LGBT activists, human rights defenders, as well as ethnic and religious minorities," the report said.

Critics accuse Ukraine’s current leadership of ignoring the radical and sometimes violent actions of members of nationalist groups with far-right views because of how it might look cracking down on them after many fought to protect the country from Russia-backed forces in the war-torn eastern regions.

Perhaps hinting at a new tack, the National Police statement about the June 7 attack used markedly different language from statements about previous attacks.

"The police will rigorously respond to a violation of the law regardless of which organizations’ members are violators," it said. "No one has the right to engage in illegal activities, pseudo ultimatums, or for the sake of PR to conduct demonstrative pogroms against other citizens. In particular, with regard to representatives of ethnic minorities."