Why are Ukrainian pensioners from Donbas forced to fight or die for their pensions? 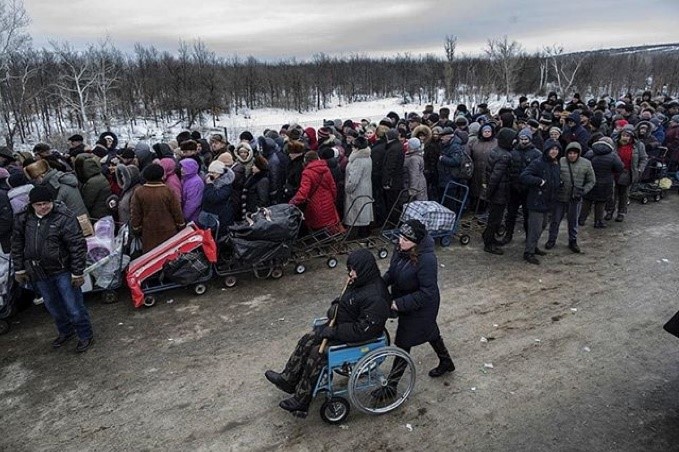 At least ten pensioners have died this year alone at the checkpoints between areas under the control of the self-proclaimed ‘Donetsk and Luhansk people’s republics’  and government-controlled Ukraine.  While the death certificate may well give ‘natural causes’, the conditions in which the 70-year-old man on 7 February, as well as nine people died were anything but normal.

Elderly people are forced to wait in queues for many hours, if not longer, in winter conditions, and it is hardly surprising that their bodies cannot cope with the strain.

While the Ukrainian military blame the so-called authorities in ‘DPR’ and ‘LPR’ for artificially causing the queues, the very fact that most of these elderly people are forced to make the journey is because of Ukrainian government policy.

Ukrainians living in the so-called ‘republics’ are not able to receive their pensions in uncontrolled territory, and must register as ‘displaced persons’ [IDP] in areas under government control.  This, however, is not enough, since they are also obliged to appear in person at least once in two months.

There are well over a million pensioners living on uncontrolled territory.  In the vast majority of cases, they did not remain (or return) because of support for Russia’s proxy ‘republics’, but because they had nowhere to go.  Many people already of retirement age, or close to it felt they could not cope with the upheaval.  Some remained because they wanted to be close to the graves of wives, husbands or other family members.

The Ukrainian military complain that  ‘DPR’ and ‘LPR’ are deliberately making the situation much worse.  Oleksandr Kuts, head of the Donetsk Regional Administration, accuses the ‘DPR/LPR’ people of dragging out the procedure – they copy out the IMEI information on people’s mobile phones and carry out an extensive search of their things.   The military also accuse ‘DPR/LPR’ – they say that a huge number of people may suddenly be let through 15 minutes before the checkpoint is due to close. There isn’t enough time to check them through, meaning that some place needs to be found for people who’ve arrived on buses and can’t go back.

Although the conditions at the checkpoints have improved over the last two years, there are unlikely to be trained doctors and certainly no medical units with resuscitation facilities.

There had appeared to be a breakthrough on 4 September 2018 when Ukraine’s Supreme Court upheld an earlier ruling in favour of an internally displaced person from Donetsk whose pension had been suspended since April 2017.  Although the case was different from those of people living on uncontrolled territory, the basic principle was that IDP status could not change a person’s constitutionally guaranteed right to their pension.   The decision was therefore welcomed as a lifeline by the UNHRC [the UN’s Refugee Agency) as “ensuring hundreds of thousands of elderly, internally displaced people and residents of the non-government controlled areas in eastern Ukraine will have easily-available access to their pensions”.

Six months later, the situation has not changed for pensioners from uncontrolled territory, only the weather conditions in which they try to cope with many hours in queues to go through the checkpoints.

In its 24th Report on the human rights situation in Ukraine (from 16 August to 15 November 2018), the Office of the United Nations High Commissioner for Human Rights was blunt: " In violation of their right to social security, IDPs as well as older persons living in territory controlled by ‘Donetsk people’s republic’ and ‘Luhansk people’s republic’ continued to face impediments to accessing their pensions, for many their only source of income and support. In October 2018, only 44.7 per cent of IDP pensioners registered in Donetsk region and some 60 per cent of those registered in Luhansk region received their pension payments"

Even those pensioners who left in 2014 and can prove that they are living in other parts of Ukraine still run up against problems if they visit Donbas since their names are recorded as having crossed the checkpoint.  Any bleep meaning that they are not recorded as having left can lead to the Pension Fund freezing a person’s pension for that period.

This is illegal, and the courts will uphold a person’s right to their pension payments but the process is long and can be stressful for people who have already been through so much.

Informator reports the case of Iryna Pokatilovska and her husband who have been living in Zaporizhya since 2014.  Since he has suffered two strokes, they don’t travel much at all, but, out of fear of losing it altogether, they visit their home in Donetsk once a year. They have no family either there or elsewhere in Ukraine whom they could ask to help.

In June 2018, there was a delay with Pokatilovska’s pension with it proving that the ‘Arkan’ system had wrongly recorded her as crossing into occupied territory and not returning.  This was rectified, however the outstanding monthly payment was not issued.  The couple are living solely on their pensions, and this was a major problem. Although that was eventually resolved, the payments were again suspended in August, although the couple had not left Zaporizhya.  It turned out that she had once again been placed on the Arkan List though on the basis of the same information as the previous information.

As mentioned, all of this does eventually get resolved if the person stands up for his or her rights.  The NGO Right to Defence (and other human rights NGOs) advise turning to the courts.  These will uphold the pensioners’ right to his or her pension, but, because the courts are overloaded, this takes around half a year..  Nor is that guaranteed to be the end of the problem.  Since May 2018, the Pension Fund has been in no hurry to comply with the court rulings, with the bailiff service needing to be invoked.

The elderly reportedly make up almost 30% of the 3.4 million people in need of humanitarian assistance and half of registered IDPS.